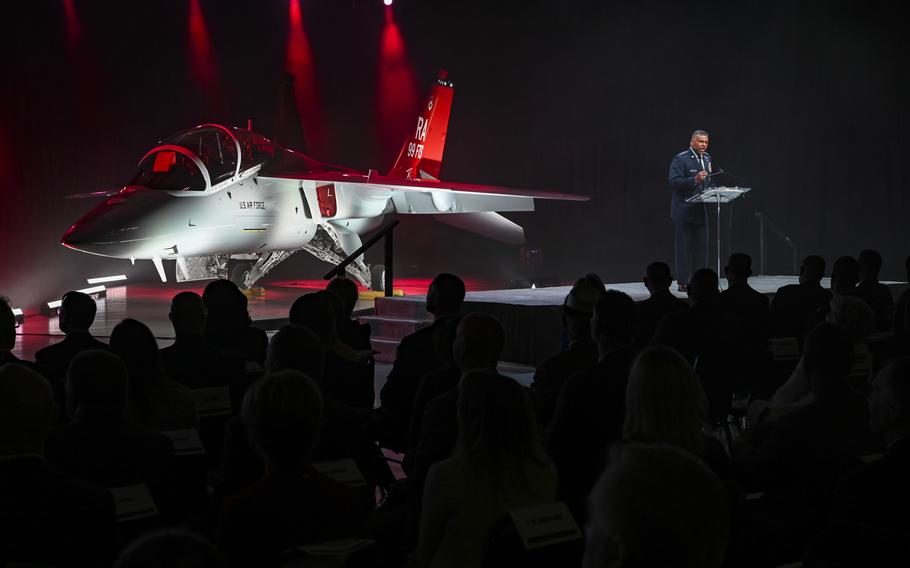 The first new Air Force aircraft of a program expected to train a generation of airmen has rolled off the production line, complete with a paint job that honors the trailblazing World War II-era Tuskegee Airmen.

The T-7A Red Hawk training aircraft was unveiled by Boeing at Lambert International Airport in St. Louis, and is one of 351 aircraft to be delivered under a $9.2 billion contract signed in 2018, an Air Force statement said Thursday.

The T-7A will train airmen to fly fourth and fifth-generation fighters, such as the F-35. It is set to replace the Air Education and Training Compound’s T-38C Talon. The initial version of the T-38 made its debut in 1961 as the world’s first supersonic training aircraft.

The T-7A Red Hawk has its red tail symbol and name taken from the Curtiss P-40 Warhawk and the 99th Fighter Squadron, the first African American fighter squadron.

“With this rollout, we honor our storied history and the heroes who wrote the chapters,” Lt. Gen. Richard Clark, U.S. Air Force Academy superintendent, said in the statement. “We usher in an exciting new era of aviation and a new generation of heroes who will write the next chapters.”

The Red Hawk is the first Air Force aircraft to use digital tools that allowed it to move from the design phase to testing in three years. It will be tested on the ground before heading to Edwards Air Force Base, Calif., for flight testing later this year, the statement said.