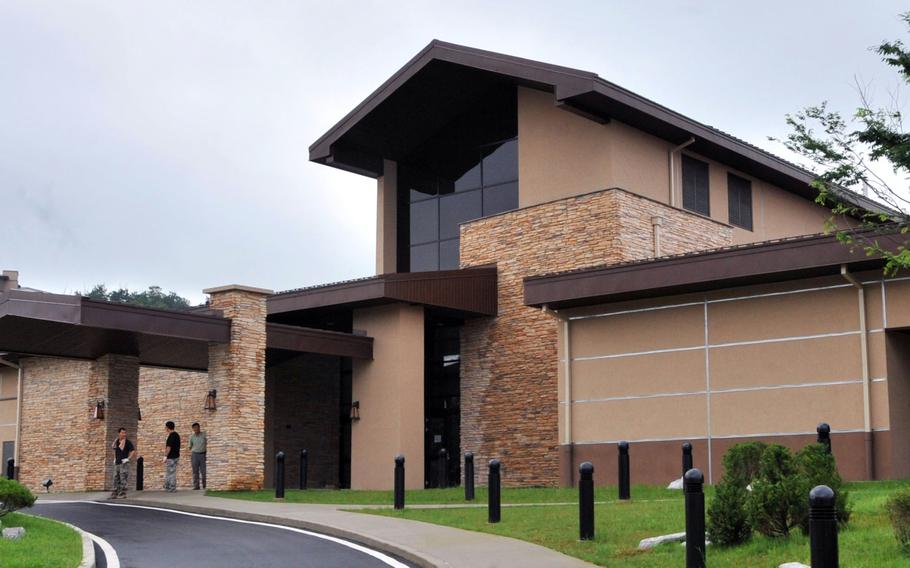 The enlisted club at Osan Air Base, South Korea, is pictured before it opened in 2012. (Stefanie Torres/U.S. Air Force)

CAMP HUMPHREYS, South Korea — The U.S. military in South Korea is investigating videos showing dozens of people dancing close together, without masks at a club on an air base on Saturday night.

Videos posted to Instagram and TikTok show military personnel drinking and dancing during a club-like event at the Enlisted Club at Osan Air Base in Pyeongtaek, roughly 30 miles from Seoul.

Service members, according to the current policy imposed by U.S. Forces Korea, are required to wear masks in all indoor common areas on military facilities to prevent the spread of the coronavirus.

USFK spokesman Col. Lee Peters in an emailed statement Tuesday said the command was aware of the event and was still “gathering all the facts and pertinent information.”

Peters said USFK-affiliated personnel, which include civilian employees and family members, need to “conduct themselves appropriately while following all … mitigation measures — both on and off installation — at all times.”

U.S. service members are instructed to adhere to local public health laws in addition to several USFK prohibitions, which include an ongoing ban on bars and clubs throughout the peninsula.

Peters said USFK “remains committed to being good neighbors” with South Korea and “condemns any type of behavior” affecting the alliance between the two countries.

Maskless parties hosted at U.S. facilities in December prompted the temporary closure of buildings at Osan and Camp Humphreys, the largest U.S. military base overseas.

Partygoers at the Flightline Tap Room on Camp Humphreys were seen in videos and photographs on social media dancing without wearing masks.

USFK at the time described the two events as having “displayed poor judgment and actions inconsistent with USFK’s core tenets and COVID-19 health protection mitigation measures.”

In a separate incident in February, Osan Air Base temporarily went into lockdown after a service member violated health orders and attended a large off-base party. People affiliated with the base were ordered to shelter-in-place until contact tracing was completed.

Four service members stationed at Osan tested positive for the coronavirus between Aug. 18 and 21, according to USFK’s most recent update Monday. All of the infected service members were placed into medical facilities.

Less than 1% of USFK’s force has been confirmed to be infected with COVID-19 and it “remains at a high level of readiness,” the command said in its update. Over 80% of its community, which includes civilian employees and military spouses, are inoculated.