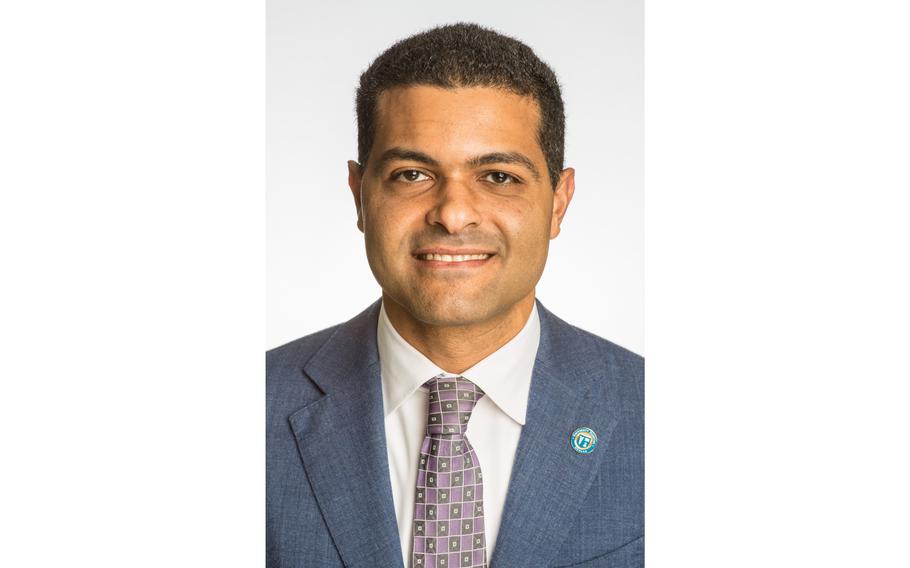 The Senate on Thursday, July 21, 2022, confirmed Dr. Shereef Elnahal as the VA’s undersecretary of health. Elnahal previously served as the CEO and president of University Hospital in Newark, N.J., since 2019. Before joining University Hospital, Elnahal served as New Jersey’s health commissioner. (Keith B. Bratcher Jr.)

WASHINGTON — The Department of Veterans Affairs has a new undersecretary to lead the largest health care system in the United States, after the job remained vacant for five years.

It will not be Elnahal’s first foray into VA health care. He served as the assistant deputy undersecretary for health for quality, safety and value from 2016 to 2018. During his time in that job, Elnahal managed the quality of care for the Veterans Health Administration and co-founded its innovation ecosystem, which is part of the VHA’s Office of Discovery, Education, and Affiliate Networks. The program helped advance innovation and practices that help improve veteran care.

“Dr. Shereef Elnahal has an impressive record of leading health care systems and agencies, and has shown a strong commitment to serving millions of veterans and hardworking employees at VA,” Sen. Jon Tester, D-Mont., chairman of the Senate Veterans’ Affairs Committee, said in a prepared statement. “Now more than ever, the department needs permanent, qualified leadership to guide the nation’s largest integrated health care system in the right direction. I look forward to working with him in his new role to implement needed reforms to ensure veterans have access to the timely health care and services they’ve earned.”

“Dr. Elnahal’s position is a vitally important one, particularly as the VA health care system prepares to care for millions more toxic-exposed veterans under the PACT Act and the new electronic health record rollout continues to disappoint,” Bost said in a prepared statement. “Dr. Elnahal has his work cut out for him, and I look forward to working with him to ensure that veterans get the health care they have earned when they need it and where they want it, without having to wait too long or travel too far.”

The VA had been without a confirmed leader of the Veterans Health Administration since the position was held by David Shulkin. Shulkin left the position in February 2017 after he was nominated by former President Donald Trump as the VA secretary.

Richard Stone acted as the VA undersecretary of health for nearly three years and led the agency amid the coronavirus pandemic. He resigned last July after he learned he was not nominated for the position.

In October 2021, the VA abandoned an initial search for a candidate for the job and restarted the process. The VA established a commission to aid in the search for candidates for undersecretary of health — a position that oversees hundreds of hospitals and clinics that comprise the largest health care system in the country. The job is responsible for hundreds of thousands of employees and an annual budget of about $61 billion.

With this job filled, the VA must now fill another. On Tuesday, VA Secretary Denis McDonough approved the formation of a commission to search for candidates to fill the top job for the agency’s benefits administration.

The Veterans Benefits Administration’s undersecretary post has been vacant for almost two years. The job was held last officially by Paul Lawrence, who served in the role from May 2018 until January 2021. Thomas Murphy has served as the interim undersecretary since January 2021.