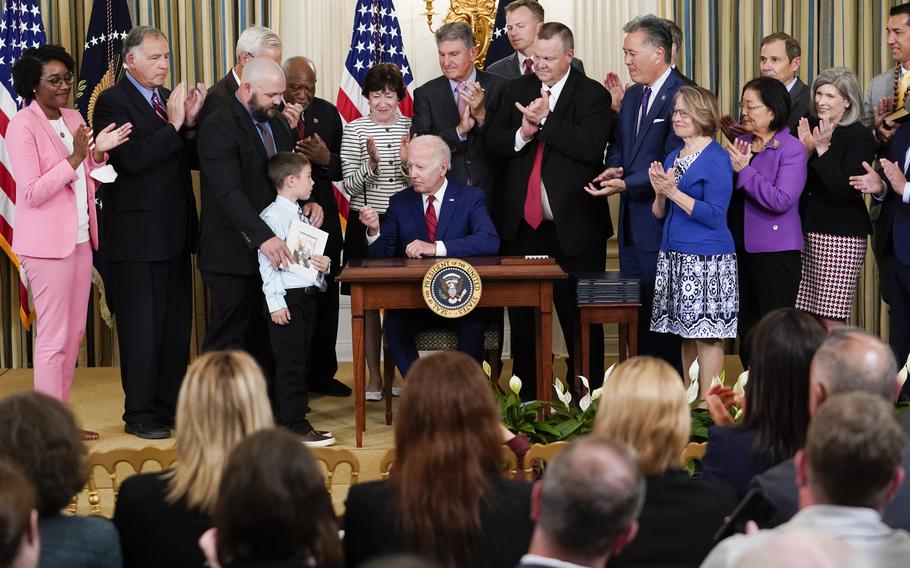 President Joe Biden hands a pen to Marine Corps veteran Kate Hendricks’ son Matthew after Biden signed a bill into law named after his late mother during an event in the State Dining Room of the White House in Washington, on Tuesday, June 7, 2022. (Susan Walsh/AP)

WASHINGTON — President Joe Biden on Tuesday signed two bills into law that will expand mammogram access for female veterans who served in areas with toxic exposures and improve services for them in rural parts of the country.

"It's a sacred obligation because veterans are the backbone, the spine of who we are as a country," Biden said during the signing at the White House. "Less than 1% risks everything to defend our nation and our values and everything we hold dear. The 99% of us who don't, we owe them. We owe them big, and that's what today's all about: It's paying a debt, in my view."

The two bills were among nine bills related to veterans that Biden signed into law Tuesday. One of the other bills awarded the Congressional Gold Medal to veterans of the Army Rangers of World War II.

A May 2021 study by the National Library of Medicine reported female veterans were nearly three times more likely to develop invasive breast cancer than the rest of the population. The study also reported breast cancer cases had tripled in the Department of Veteran Affairs from 1995 to 2012. Additionally, the study said breast cancer is the leading cancer that affects female veterans, with data that implied increases were based on service-related exposures.

At age 25 in 2005, Thomas served in Iraq and was near multiple burn pits in Anbar province. In 2018, when she was 38, Thomas went to a routine health care appointment at her local VA, and her doctor encouraged her to get a mammogram. Following the mammogram, she was diagnosed with an aggressive form of breast cancer. Thomas had no family history of the disease and believed her diagnosis was related to her burn pit exposure.

Thomas fought for years to prove her cancer resulted from her exposure to toxic burn pits before the VA recognized the link. At the same time, she advocated for the process to change so that other veterans didn't face the same challenges.

Thomas died in April at the age of 42.

"Kate knew this was the right thing to do, and America — building on her work and influence — has finally done it," said Marine veteran Mindy Beyer, a friend of Thomas. "Today was a huge step forward for veterans' health. We must all keep vigilant and continue to push forward these initiatives to protect those that protect us."

Beyer said she, along with Thomas's other friends and family, were present at the signing. Biden also gave Thomas's son, Matthew, the pen that he used to sign the bill into law.

"I've been pleased to work in a bipartisan way to get these measures across the finish line so we can save lives through modern approaches to breast cancer screening and treatment as well as increased accountability within the department," Boozman said this week. "Our veterans deserve this progress and now we must ensure these laws are implemented in a timely and effective way."

Another bill that Biden signed into law is the Making Advances in Mammography and Medical Options for Veterans Act, introduced by Sen. Jon Tester, D-Mont., chairman of the Senate Committee on Veterans' Affairs. The new law gives the VA one year to start a pilot program for veterans who live in states where the department doesn't offer in-house mammography services.

In addition to extending access to mammograms for veterans in rural areas, the new law changes VA mammography. In part, it will upgrade all the VA's in-house mammography services to use 3D imaging, called digital breast tomosynthesis. Moreover, the law will expand veterans' access to clinical trials through partnerships with the National Cancer Institute.

"These new laws will connect veterans and their families with the kind of care they earned and deserve — from strengthening oversight for VA and improving veterans' access to high-quality breast cancer screenings and care," Tester said this week. "I'm proud to have worked hand-in-hand with Sen. Boozman, our Senate colleagues, and veteran stakeholders to deliver these wins for the men and women who served and sacrificed."