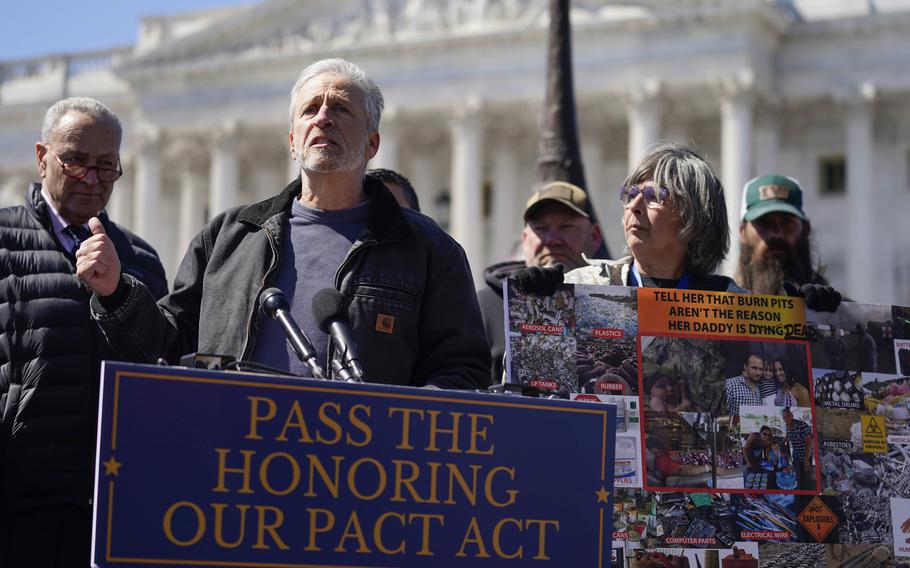 WASHINGTON — Senators considered for the first time Tuesday a sweeping measure that aims to expand eligibility for health care and benefits to millions of veterans exposed to burn pits and other toxins.

The Senate Committee on Veterans’ Affairs discussed the Honoring Our Promise to Address Comprehensive Toxics Act, known as the PACT Act, which passed through the House in early March and is at odds with a Senate strategy to address the same issue. Though advocates are pushing Congress to take swift action on the bill, some committee members conveyed interest Tuesday in taking their time to consider the measure, make changes and come to an agreement before sending it to the Senate floor.

The PACT Act seeks to provide an easy path to health care and benefits for veterans who served near open-air burn pits, which were used throughout the 1990s and the post-9/11 wars to burn garbage, jet fuel and other materials. Veterans diagnosed with cancer, respiratory issues and lung disease at young ages have blamed exposure to the toxic fumes, but the Department of Veterans Affairs contended for years that there wasn’t sufficient evidence to support their claims.

VA Secretary Denis McDonough testified at the hearing and expressed his support for the measure.

“We support the bill for many reasons, the first of which is that it helps the VA accomplish a priority goal: getting veterans into VA care,” he said. “Addressing toxic exposure is also a top priority for this [presidential] administration.”

President Joe Biden said during his State of the Union address earlier this month that he would sign any legislation to expand health care and disability compensation to veterans suffering the effects of toxic burn pits.

While the House has proposed a major reform bill, the Senate has opted for a more incremental approach to the issue. In February, the Senate passed the Health Care for Burn Pit Veterans Act, which would expand health care to veterans but doesn’t address benefits. The sponsors of the bill insisted the measure is just a first step in a three-phase approach that would add benefits incrementally.

The House’s PACT Act would increase spending by about $318 billion during the next decade, according to estimates from the Congressional Budget Office. The Senate’s initial bill would come with a price tag of about $1 billion.

Sen. Jerry Moran of Kansas, the ranking Republican on the Senate Veterans’ Affairs Committee, urged the House on Tuesday to approve the Senate’s bill. He argued the VA didn’t have the ability or staffing to implement the House bill.

“We asked the House to pass the [Health Care for Burn Pit Veterans Act], but they have chosen not to take up that piece of legislation yet and decided to send us the bill we’re reviewing today,” Moran said. “It includes provisions that perhaps will stretch the VA beyond its operational capacity, providing no guarantee that veterans will be able to access the benefits promised.”

McDonough responded to the concerns, saying the department was working to hire about 2,100 new employees to process veterans’ claims for benefits. The extra staff could help with the estimated 1.5 million new benefits claims that the PACT Act would likely generate, he said.

“We think there are things we should do and we are doing, and one is we’re hiring about 2,100 extra people,” McDonough said. “We’ll probably have to hire more if this is enacted and use the teams we have more aggressively, with mandatory overtime.”

McDonough pointed out two changes that his department wants to make to the bill before it’s passed, one is to amend a section that he believes would inadvertently delay the process to approve presumptive conditions. When a condition is on the presumptive list, it means the government acknowledges a veteran’s military service caused their medical condition, and it lowers the amount of evidence that a veteran must provide to receive benefits.

The PACT Act could create a commission to oversee the VA’s efforts to add presumptive conditions. While the idea is intended to speed up the process, McDonough said he believed it could do the opposite.

“I get what they’re trying to do, which is to get us to move quicker, but I think the tools they use to get us to do that would actually slow us down,” he said.

McDonough also wants Congress to add a provision to the bill that would authorize 31 pending leases for VA medical facilities nationwide. Under the law, the VA must receive legislative approval to lease major medical facilities, but Congress has not authorized them on a regular basis.

“Facility space is critical to caring for veterans, and the PACT Act will bring millions more into our care,” McDonough said. “Yet, of 31 large medical facility leases, 21 have been pending for years. We urge you to approve those so we can be genuinely responsive to veterans’ needs.”

While the Senate works through changes on the bill, some advocates are losing patience. Comedian Jon Stewart, who recently became an advocate for veterans suffering from burn-pit exposure, led a rally outside the Capitol before the hearing on Tuesday afternoon. He told the crowd, “We can’t wait any longer.”

“We have a hearing today, and you’re going to hear a lot of nonsense about whether this is responsible,” Stewart said. “You know what would’ve been nice, if they would’ve been responsible 20 years ago and… understood that 20 years of war was going to create an overflow and influx of sick veterans.”

Various veterans organizations and friends and family members of veterans suffering the effects of toxic exposure attended the rally. Marine Corps veteran Kate Hendricks Thomas, an outspoken advocate of the legislation and a public health official, couldn’t be there. Though she had testified on Capitol Hill just four weeks ago, she’s now in hospice care, said her friend and fellow Marine Mindy Beyer.

Thomas was diagnosed with stage-four breast cancer in 2018 at the age of 38. As a military police officer, Thomas served for six months in Fallujah, Iraq, near an open-air burn pit, Beyer said.

Thomas fought for years to prove her cancer was the result of her exposure to toxic burn pits before the VA recognized the link. At the same time, she advocated for the process to change, so other veterans didn’t face the same challenges.

Beyer urged lawmakers at the rally to fight for the legislation on behalf of her friend.

“Kate was just here four weeks ago, testifying,” she said. “But her liver is failing now, and she went into hospice two weeks ago. So now, it’s your turn. As Marines, it’s an honor to pick up the flag for someone who knew from the get-go that she would die holding the line. Kate has done that for us, and now we need to carry on the mission for her.”

Sen. Chuck Schumer, D-N.Y., the Senate majority leader, vowed during the rally to take the bill for a vote on the Senate floor by the end of the year. Stewart attempted to place pressure on Republicans.

“You see the entire veterans community standing together to get this done, and it’s going to come down to what it always comes down to here: We need 10 Republicans,” Stewart said, referring to the 60-vote majority that the Senate requires in many cases to pass legislation. “After 20 years of fighting, that’s what it comes down to: 10 Republicans.”

The House approved the PACT Act earlier this month with a vote of 256-174, and all those voting against the measure were Republicans. Some House Republicans cited cost concerns and urged Democrats to approve something more fiscally palatable to both parties.

Concerns from Senate Republicans have so far centered on the implementation of the bill.