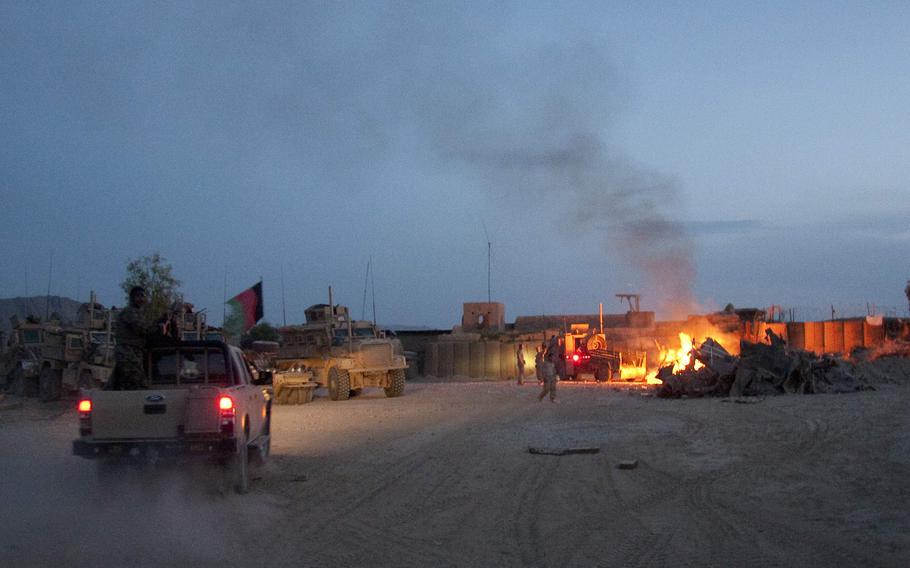 In this April 28, 2011, photo, an Afghan National Army pickup truck passes parked U.S. armored military vehicles, as smoke rises from a fire in a trash burn pit at Forward Operating Base Caferetta Nawzad, Helmand province south of Kabul, Afghanistan. The House voted Thursday, March 3, 2022, to pass the Promise to Address Comprehensive Toxics Act, a sweeping measure that expands eligibility for health care and benefits to millions of veterans exposed to burn pits and other toxins. (Simon Klingert/AP)

WASHINGTON — The House on Thursday approved sweeping legislation that would expand Department of Veterans Affairs health care and benefits to veterans affected by burn pits and other toxic environments.

House lawmakers voted 256-174 to approve the Honoring Our Promise to Address Comprehensive Toxics Act, known as the PACT Act. All those voting against the measure were Republicans, who cited cost concerns and urged Democrats to pass something more fiscally palatable to both parties. Thirty-four Republicans backed the legislation.

The measure must now go to the Senate, where it faces an uncertain future. Some senators prefer an incremental approach to expanding health care and benefits, rather than one comprehensive bill.

“We passed the most comprehensive legislation to date to treat toxic exposure as a cost of war and ensure that all toxic-exposed veterans can access the care and benefits they’ve earned,” said Rep. Mark Takano, D-Calif., the chairman of the House Committee on Veterans’ Affairs. “This fight is not over, but I will not rest until our veterans have a guarantee in statute that their government will take care of them when they come home — no matter the cost.”

The bill would increase spending by about $208 billion during the next decade because of the expanded eligibility for disability compensation, according to the latest estimates from the Congressional Budget Office. The office estimated the bill would cost an additional $110 billion in the following 10 years for the expansion of health care.

Throughout the 1990s and the post-9/11 wars, the military used open-air pits to burn garbage, jet fuel, paint, medical waste, plastics and other materials. Veterans diagnosed with cancer, respiratory issues and lung disease at young ages have blamed exposure to the toxic fumes. They have sought VA benefits and health care, but the department contended for years that there wasn’t sufficient evidence to support their claims.

The PACT Act would add 23 of those cancers and respiratory illnesses to the list of conditions that would qualify veterans for VA benefits and health care.

The bill also addresses other types of toxic exposure. The bill calls for presumptive benefits for Vietnam War veterans who have developed hypertension because of exposure to chemical herbicides, as well as veterans who served in Thailand, Laos and Cambodia and were potentially exposed to herbicides. It also includes veterans who participated in toxic cleanup activities in Enewetak Atoll or Palomares, Spain.

Rep. Mike Bost of Illinois, the ranking Republican on the House Committee on Veterans’ Affairs, criticized Democrats for approving the bill and argued Thursday in favor of the Senate’s approach to the issue.

The Senate passed a bill last month that would expand health care to more veterans who served in areas with toxic burn pits, but it doesn’t address benefits, such as disability compensation. The leaders of the Senate Veterans’ Affairs Committee, who sponsored the bill, insisted the measure is just a first step in a three-phase approach that would provide health care and benefits incrementally. The cost of the bill totals $1 billion, according to the office of Sen. Jon Tester, D-Mont., chairman of committee.

Bost attempted Thursday to pass a measure that mirrored the Senate’s bill.

“Instead, House Democrats shoved the deeply flawed policies and wildly expensive costs of the PACT Act through the House with no regard for finding common ground,” he said.