Danielle Robinson, guest of first lady Jill Biden, is recognized during President Joe Biden’s State of the Union address to a joint session of Congress on Tuesday, March 1, 2022, at the Capitol in Washington. (Jabin Botsford, Pool via AP)

WASHINGTON – President Joe Biden on Tuesday night unveiled a new “unity agenda” that includes veterans as one of four areas of policymaking in which he believes Congress can come to a consensus.

Biden, facing a stalled domestic agenda, used his State of the Union address to try to reignite debate on some of his highest priorities, including tax and immigration reforms and bills to raise the minimum wage, combat climate change, cut pharmaceutical prices, invest in infrastructure, subsidize child care, ban assault weapons and high-capacity magazines, and strengthen voting rights.

Separate from those priorities, Biden introduced an agenda that includes four seemingly uncontroversial issues on which he believes Congress can agree. The agenda addresses veterans, as well as the opioid epidemic, mental health care and cancer treatment.

“Tonight, I’m offering a unity agenda for the nation,” Biden said. “Four big things we can do together.”

The Department of Veterans Affairs plans to extend benefits and health care to a small number of veterans suffering from nine rare respiratory cancers caused by toxic burn pits, Biden announced. The VA said Tuesday that it would begin the federal rulemaking process to add the conditions to its presumptive list, which lowers the amount of evidence that a veteran must provide to receive benefits.

Biden also urged lawmakers to come to an agreement on legislation to expand health care and disability compensation to millions of veterans who were exposed to burn pits. 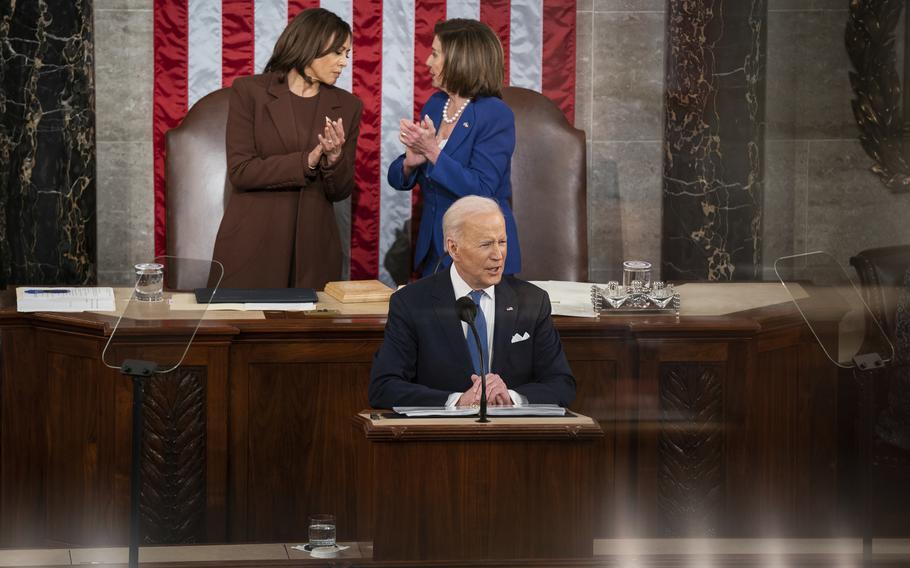 President Joe Biden delivers his first State of the Union address to a joint session of Congress at the Capitol, Tuesday, March 1, 2022, in Washington. (Sarahbeth Maney/The New York Times via AP, Pool)

After presenting his unity agenda, Biden said: “I don’t see a partisan edge to any of those four things.”

However, House and Senate lawmakers disagree about the best strategy to secure health care and benefits for veterans exposed to burn pits. While the Senate is attempting an incremental approach with an initial phase at a cost $1 billion, House Democrats want to pass a sweeping bill – one that comes with a cost of $208 billion for the next 10 years.

Rep. Mark Takano, D-Calif., is the chairman of the House Committee on Veterans’ Affairs and the lead sponsor on the bill called the Promise to Address Comprehensive Toxics Act. He’s planning to host a rally outside the Capitol on Wednesday morning to build support for the House to pass the measure this week.

House Speaker Nancy Pelosi, D-Calif., and comedian Jon Stewart, who has become an advocate for veterans exposed to toxic burn pits, are among those expected to join the rally. During a speech on the House floor Monday, Takano criticized the Senate’s approach as a “gesture,” rather than “sincere movement” on the issue.

“Unlike other pieces of legislation in this space, the PACT Act offers a comprehensive solution,” he said.

Some Republicans in the House have balked at the PACT Act, describing it as fiscally irresponsible.

Biden said Tuesday night that he would sign any bill that would expand health care and disability compensation to the affected veterans.

He made a personnel appeal and brought up the death of his son, Maj. Beau Biden, who died of brain cancer in 2015. Beau Biden, a member of the Delaware Army National Guard, served in Iraq in 2018, and his father suspects burn pit exposure could have been to blame.

“We don’t know for sure if a burn pit was the cause of his brain cancer, or the diseases of so many of our troops,” Biden said. “But I’m committed to finding out everything we can.”

Danielle Robinson, a military widow from Ohio, attended the State of the Union as a guest of First Lady Jill Biden. Robinson’s husband, Sgt. 1st Class Heath Robinson, was diagnosed with a rare autoimmune disorder and lung cancer after serving with the Army National Guard in Kosovo and Iraq, where he experienced prolonged exposure to burn pits. He died in 2020. Danielle Robinson has since become an advocate for other service members and veterans exposed to burn pits.

“Danielle says Heath was a fighter to the very end,” Biden said. “He didn’t know how to stop fighting, and neither did she. Through her pain she found purpose to demand we do better.”

Biden’s first State of the Union included more discussion about policymaking for veterans than is typically outlined in the annual message from presidents. At least one national veterans organization, however, was left disappointed.

AMVETS, which has about 250,000 members nationwide, issued a statement following the State of the Union that said the actions that Biden outlined for veterans didn’t go far enough.

The group applauded Biden’s announcement about expanding health care and benefits to veterans suffering from nine rare respiratory cancers but said more conditions should be considered.

AMVETS had also wanted to hear from Biden about plans to address veteran suicide.

“The Biden administration appears to be content in allowing the VA to continuing doing what it has been doing for two decades: lean on manualized therapies and pharmaceuticals,” the group wrote. “AMVETS has yet to see an attempt to provide innovative, impactful ways to treat veterans suffering in mental health.”

As part of the focus on mental health care in Biden’s unity agenda, the White House announced Tuesday a new effort to connect veterans to same-day treatment for mental health and substance abuse issues. Details about the initiative weren’t available Wednesday.