For Memorial Day, telling the stories behind the gravestones 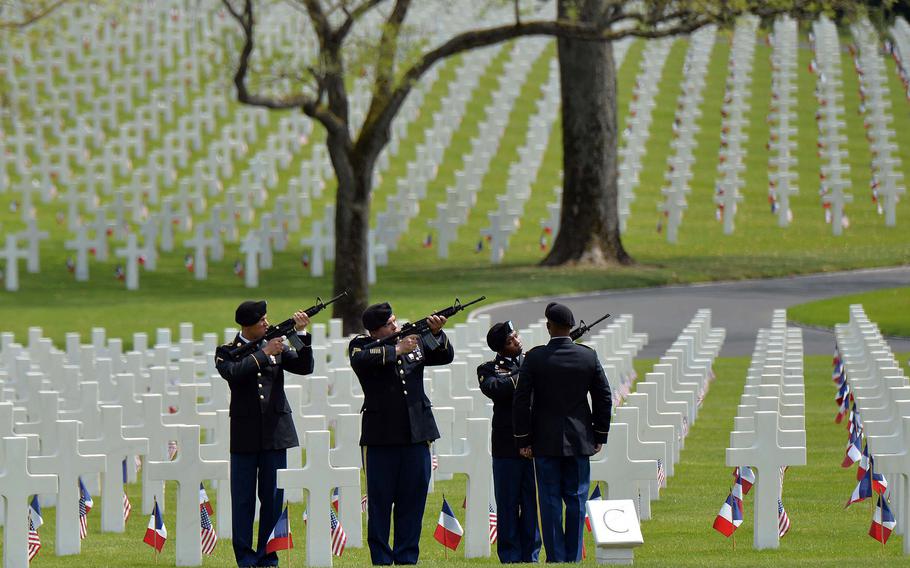 A firing team from the 2nd Cavalry Regiment out of Vilseck, Germany, fires volleys at the Memorial Day Ceremony at Lorraine American Cemetery in St. Avold, France, Sunday, May 26, 2019. (Michael Abrams)

The simplest facts of James Gerald LaMarre Jr.’s life and death are etched in his gravestone at Arlington National Cemetery: born on May 2, 1921; died on Feb. 2, 1945; a staff sergeant in the U.S. Army from Virginia who served with the 18th Infantry.

It’s enough to convey that LaMarre gave his life in service to a worthy cause, but Don Milne wants you to know even more about the 23-year-old.

He wants you to know that LaMarre attended Fairfax High School, where he was president of the Agriculture Club and played outfield for the school baseball team; that in civilian life he was a truck driver; that, five months before he enlisted, he married Ethel Rose Fox at the Methodist Church in Rockbridge, Va.; that he had blue eyes.

Milne, 61, is the creator of Stories Behind the Stars, an effort to research every last U.S. soldier, sailor, airman and Marine who died in World War II and write a brief essay about each that can be pulled up on a smartphone app.

It’s a gargantuan task. More than 421,000 Americans died in the conflict, and Milne wants to gather all their stories by Sept. 2, 2025, the 80th anniversary of the war’s end. He’s broken it into manageable chunks, relying on volunteers around the world to scour genealogical sites to gather information and craft the text. Don Milne at Arlington National Cemetery. In 2020, the retired bank employee from Louisville started a project called Stories Behind the Stars. His hope is to enlist volunteers to craft 500-word obituaries of all 421,000 Americans service men and women killed in World War II. His current focus is on the stories of the 8,000 World War II dead buried at Arlington. (Family photo)

“I have about 400 volunteers regularly contributing stories,” said Milne, who retired as the financial literacy manager at a bank and lives in Louisville “In order to reach our target we’re going to need between 2,000 and 3,000 people doing one story a week.”

Milne hopes to find more people willing to “give up one night of Netflix and instead of watching ‘Tiger King’ do a story about somebody who gave their life for our country.”

Kathy Harmon of Saint Thomas Township, Pa., is one such volunteer. So far, she’s researched the lives of more than 300 World War II dead, including that of Sgt. LaMarre.

“I have a passion for genealogy,” said Harmon, 65, who has traced her own family back to the 1700s. The World War II project has made her think about history in a different way.

“When I first started doing this, the young ages of most of them really hit me,” she said. “My oldest grandson is 18. I thought, ‘Wow, these guys that gave their lives were that age.’ “

Volunteers such as Harmon use sites such as Ancestry.com to find Census records. They pore through online newspapers. They visit Fold3.com, which archives military records. They track down photos. Sometimes they find relatives on Facebook.

Milne estimates it take about two to three hours to create a story.

“Everyone does it a little differently,” he said. “It’s like a version of leaving flowers on a grave. There are no rules for what’s appropriate. Some are fancy. Some are simple.”

All are fairly short, about 500 words. The stories are saved to the Fold3.com database and can be accessed by entering the person’s name via the FindAGrave.com app. Milne hopes it will someday be possible to scan a gravestone with your phone and pull up the story.

Stories Behind the Stars — the name comes from the gold stars given to grieving families — has catalogued the 2,341 Americans who died in the Japanese attack on Pearl Harbor and the 2,502 Americans killed on D-Day. Milne’s current focus is on creating stories for all the World War II dead buried at Arlington National Cemetery, about 8,000 men and women. He hopes to have most of that completed by the Fourth of July.

On a recent trip to Arlington, Milne noticed that visitors tended to stay on the paths, seemingly reluctant to venture into the low forest of white markers that blanket the 639-acre cemetery.

“What reason do they have to?” he asked. “They might go in and see names on gravestones. They can’t do much more than that. Once people know this is available — especially in sections rich with World War II fallen, like Section 34 — they can walk from grave to grave to grave and read each person’s story. It makes the experience much richer and much more engaging.”

Jeff Joyce, 61, an Air Force veteran from Manassas, Va., is another volunteer. He also volunteers with the group Wreaths Across America and the Honor Flight program that brings veterans to Washington.

“There’s a phrase: You die twice,” Joyce said. “You die when you physically die, then you die a second time when no one remembers your name. Part of this process is trying to remind myself and others that this person had a life — a family — and they deserve to be remembered, like I would like to be remembered.”

To learn more about the project, including how to volunteer, visit storiesbehindthestars.org.