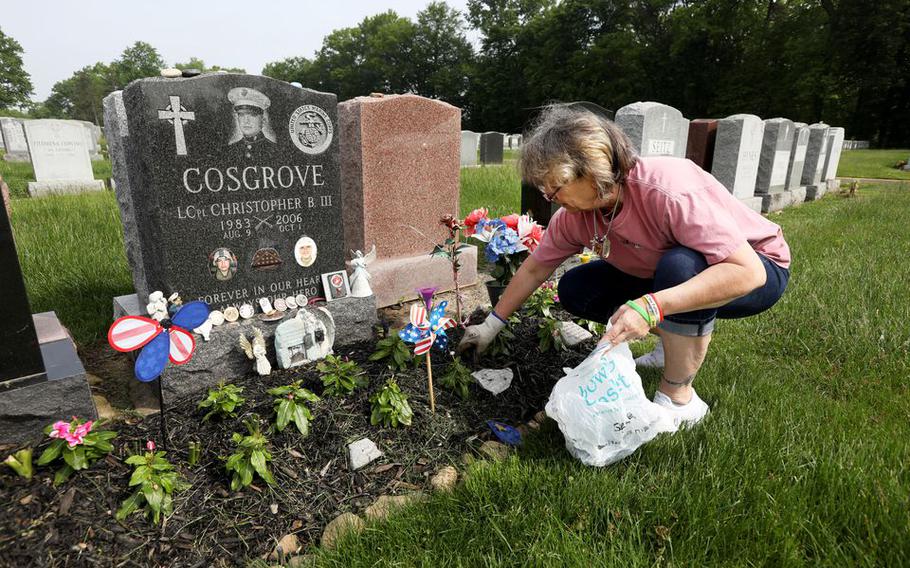 (Tribune News Service) — When Christopher B. Cosgrove III was a boy, his mom thought that as he grew older he wasn’t going to want to spend very much time with his parents. But the young man surprised her.

In high school, through college, and even after he graduated and joined the U.S. Marines “he was still hanging around with us,” his mother, Charlene Cosgrove-Bowie said. “He and his girlfriend would just hang out at the house, every time we made vacation plans he still wanted to hang out with us, it was wonderful.”

As a Gold Star mother — a parent of a fallen service member — Cosgrove-Bowie has kept up that connection with her son, just not in the way she had ever expected.

Cosgrove died 23 while serving in Iraq.

Every week, Cosgrove-Bowie spends time with him at Gate of Heaven Cemetery in East Hanover not far from her home.

During a previous visit, she spent time planting flowers at Cosgrove’s grave along with the other family plots.

She watered the flowers as pinwheels blew in the breeze. Bending down to pull weeds she stopped and looked at the pictures and portrait on his headstone. Visitors leave challenge coins, stones, or tokens letting others know they’ve been there to pay their respects.

“Every Memorial Day a gunnery sergeant does a 21-gun salute, and he puts the spent casings around the grave,” she said. “I try not to get rid of them.”

“I have to honor his memory, and I have to make sure, you know he’d be proud of it. It has to be nice and neat and clean and pretty so he would be proud,” said Cosgrove-Bowie with a tremble in her voice.

She’s not the only Gold Star mother marking a somber Memorial Day. 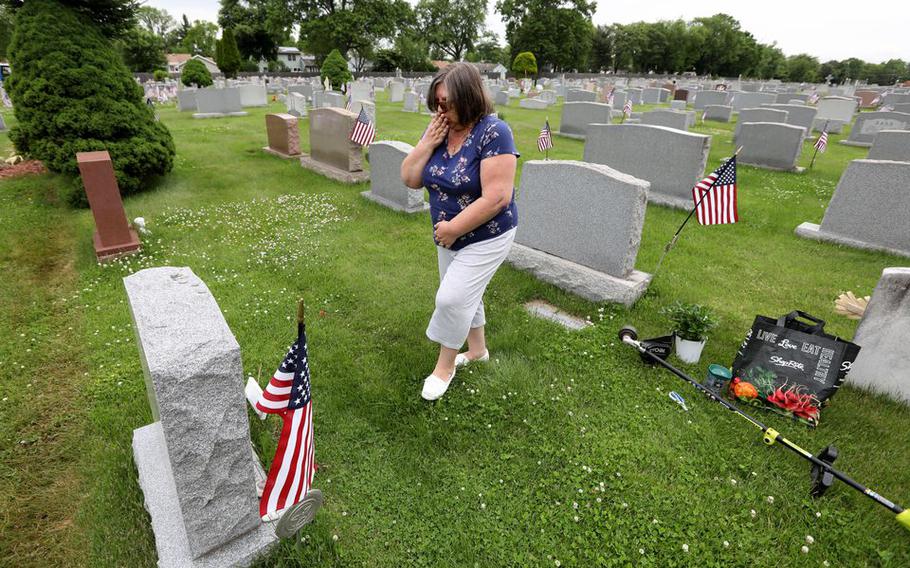 Barbara Rhoads prays at the grave of her son Spc. Ryan Rhoads who died while serving his country, at the Holy Redeemer Cemetery, in South Plainfield, N.J., May, 23, 2022 (Ed Murray, nj.com/TNS)

Every week Barbara Rhoads visits her son Ryan’s grave, sometimes less in the winter, sometimes twice in the summer. The first thing she does is pray and greets him at his resting place in the back of Holy Redeemer Cemetery in South Plainfield.

“I come, and I take care of his stone,” she said on a recent visit as flags around her were whipping in the wind. “They do the main part of the area, but they don’t get to the side of the gravestone or the foot marker and so I’ll bring my Weed Wacker and my blower to get the grass off of it, and I just do the portions (stones) so you can still read it,” Rhoads said.

As a boy, Rhoads was a lover of music and animals — he had frogs, a cat, dogs, lizards, rats. He loved music.

“Ryan was very full of life, he had lots of friends, he could come into the room and you could feel his smile,” Rhoads said. “If you were sad he would lift you up,” she added with a smile.

Rhoads was having trouble finding his path at 21, and with a family history of military service on both sides, he joined the Army.

“He blossomed,” said Rhoads, noting her son did well in basic training but was injured at advanced training. He had to stay in Oklahoma for six weeks while his group returned to Georgia.

He was injured again in Georgia but received his heavy equipment certification and, wanting to start a family, he met a woman and married six weeks later.

His mother said he suffered from post-traumatic stress disorder, started drinking and was prescribed medication.

“I spoke to him the night before he died, and he was really happy and he was coming out for Memorial Day (to) spend a week with us and the dogs,” added Rhoads.

Weeks before his death, Barbara Rhoads wrote her son a letter, telling him she wanted to get a dog. That Mother’s Day he surprised her with a puppy, which she named Sophia.

“She is the highlight of my life because she is from him,” said Rhoads with a smile.

When Cosgrove-Bowie thinks of her son she thinks of the fond memories, not the ones that hurt.

“He liked to play jokes and laugh and have a fun time. He was a nice polite young man, he loved people, loved kids, love being around family,” Cosgrove-Bowie said.

He wanted to join the Marines right after high school, but his mother asked him to wait until after college. After his third year at Monmouth University, he came home and told his mom he had a summer job.

“What job is that?” she recalled asking him. “I am going into boot camp, into the Marines,” he told her.

Cosgrove was able to attend boot camp, return to college and graduate, and then return to the U.S. Marines — just as his mother asked.

He was a lance corporal with G Company, 2nd Battalion, 25th Marine Regiment, 4th Marine Division, based at Picatinny Arsenal and was among those who volunteered to go to Iraq.

Before he left, he had to make his will and suggested he could be buried in Arlington Cemetery if something were to happen. But his mother said it would be too far for family to come visit.

“So he put in his will that he wanted to be buried here with the family which I was happy with because I can come to the grave and maintain the grave,” said Cosgrove-Bowie.

He was in Fallujah in 2006 manning an entry point when an IED went off.

“The marines that were with him have embraced us and we have embraced them,” said a teary-eyed Cosgrove-Bowie. They see each other at least once a year.

This time of year is especially difficult for families like Cosgrove-Bowie and Rhoads.

“I wish I wasn’t a Gold Star Mom,” Cosgrove-Bowie said.

Rhoads said her son won’t be alone. The family has bought cemetery plots for her, her husband, and Ryan’s brothers and sister.

“I pray for him, I know he’s in heaven, I know he’s doing better,” said Rhoads as she brushed the freshly trimmed and decorated marker for her son

After cleaning up the area she decorated it with a wreath, flowers, and a patriotic dog and cat statue.