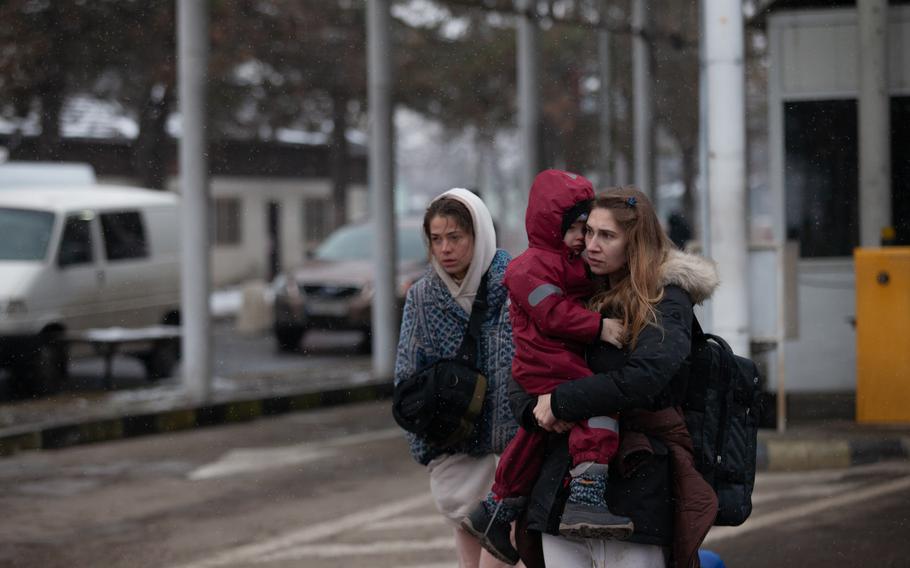 A spokesman for Project Dynamo said the organization has evacuated more than 400 people from Ukraine so far. (Project Dynamo/TNS)

WASHINGTON (Tribune News Service) — Creed Burleson checked into the Radisson Blu in Kyiv on Feb. 22 with big plans. He would set up a new website design business in Ukraine over the coming days, stopping by the bank and submitting paperwork to establish the new company with local authorities.

Instead, Burleson, 62, an Army veteran from Marion in North Carolina, ended up in the hotel’s garage-turned-bunker two days later as Russia’s bombardment began. “There was no way out because the trains were so packed,” he told McClatchy.

The sounds of air raid sirens were constant as Burleson searched for an escape. At that point, in the early days of the war, the extent of Russia’s capabilities and its penetration of the capital weren’t clear. But Burleson did not believe that time was on his side.

So he reached out to Project Dynamo, an organization founded months earlier by three Florida men to help extract Americans from war zones the U.S. government wouldn’t enter.

Project Dynamo put him through a secretive vetting process to confirm his identity. They told him to expect a text with a pickup location and to pack a single bag.

He received the text with coordinates around March 2 with four hours notice, and was soon on a bus toward an undisclosed location and told to turn off all his electronics.

“All the security areas that we had to go through — some of the authorities came on and looked at you. Some of them collected our passports. Some of them went through our luggage. And you just hoped they were Ukrainians, and not Russians, because what if they’ve infiltrated?” Burleson recalled by phone, now safely out of Ukraine.

“I was really, really happy to get the heck out of there,” he added. 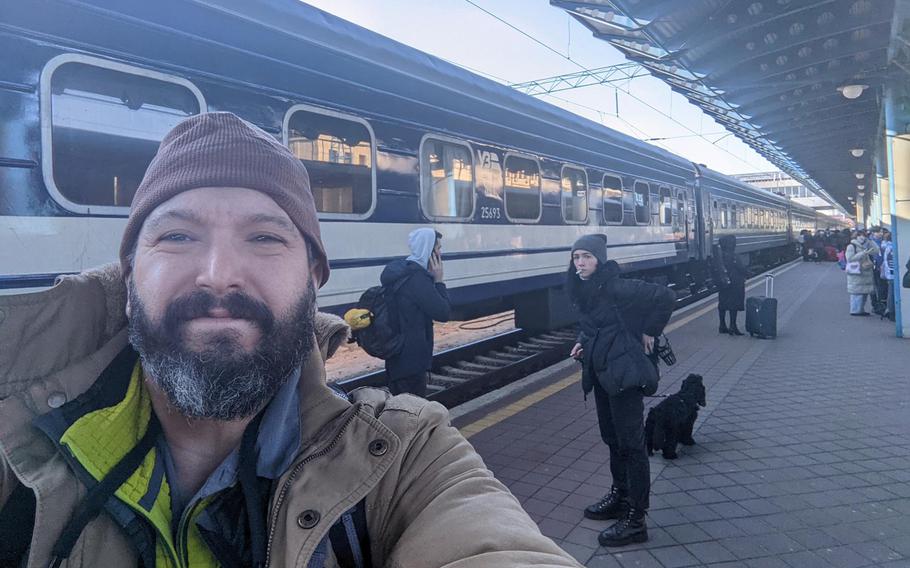 Project Dynamo began in the living room of Bryan Stern, a Tampa, Fla., resident and U.S. veteran who was among a small group of military first responders in New York on Sept. 11, 2001. (Project Dynamo/TNS)

Project Dynamo began in the living room of Bryan Stern, a Tampa, Fla., resident and U.S. veteran who was among a small group of military first responders in New York on Sept. 11, 2001.

When the United States began pulling out of Afghanistan 20 years later, in August of last year, and images emerged of Afghans falling off an airborne U.S. C-17 in their desperate effort to escape, Stern was reminded of that day in New York when men and women jumped to their deaths from the towers.

“I called up a couple friends of mine, and said, ‘This is what we’re going to do,’” Stern said in an interview on an encrypted video call from a location in southern Ukraine. Two other Tampa residents help Stern with the business and legal side of the project.

“We didn’t have a very detailed plan — we had some ideas, we had some thoughts,” he said. “But we know enough to know that you have to get there first to understand the environment.”

Project Dynamo was successful at conducting private rescues of Americans in Afghanistan at the end of the war there. After the U.S. military departed in September, with Taliban forces in full control, Dynamo chartered an aircraft that flew over 120 U.S. citizens and green card holders to the United States.

But some in the U.S. government expressed concern that the group took risks that other nonprofits would not. One of their flights out of Afghanistan in September had to be grounded in the United Arab Emirates en route to the United States, after Project Dynamo failed to share the manifest with U.S. authorities in advance. One individual on the flight was ultimately not allowed to enter the United States.

A State Department official would not comment on the work of Project Dynamo, instead directing U.S. citizens to the department’s website for assistance leaving Ukraine.

In January, as the group was wrapping up its operations in Afghanistan, another crisis brewed.

Stern arrived in Kyiv over Valentine’s Day weekend at the encouragement of a donor to begin planning for the possibility of a Russian invasion, building infrastructure for rescues. In an unfamiliar country, he had to find airfields, aircraft, buses and drivers, figure out escape routes and identify potential waypoints and safe houses.

“Everyone we work with, I have personally met,” Stern said. “We take the time to drink the tea, eat the food, meet the family, smoke the hookah, smoke the cigars, drink the vodka — whatever it is — to make sure the people we’re talking to are the ones we’re supposed to be talking to.”

It became clear as soon as the war began on Feb. 24 that Dynamo’s mission in Ukraine would look far different than its operations in Afghanistan.

A spokesman for Project Dynamo said the organization has evacuated more than 400 people from Ukraine so far, “with multiple rescue missions currently underway.” Press for Project Dynamo is handled by Judge Public Relations, whose owner, James Judge, is running for Congress in Tampa as a Republican.

Unlike its mission in Afghanistan, Dynamo’s work in Ukraine is not limited to U.S. citizens and residents. Nationals of Ukraine, NATO countries, and others with claims for asylum, are eligible as well.

Deb, a Canadian volunteer for Project Dynamo who helps secure their database of case information and train case officers, said her work for the organization has been among the most fulfilling of her career.

“For me, it’s the direct connection to the people in crisis — we have the messages from people asking for help, and some of those messages are very specific of the troubles they’re in,” said Deb, who asked for her last name not to be published out of safety concerns.

“All of the stories are heart-wrenching,” she said. “The ones that hurt me the most are the people in places like Mariupol where we literally don’t have a way to get there safely to help people.” 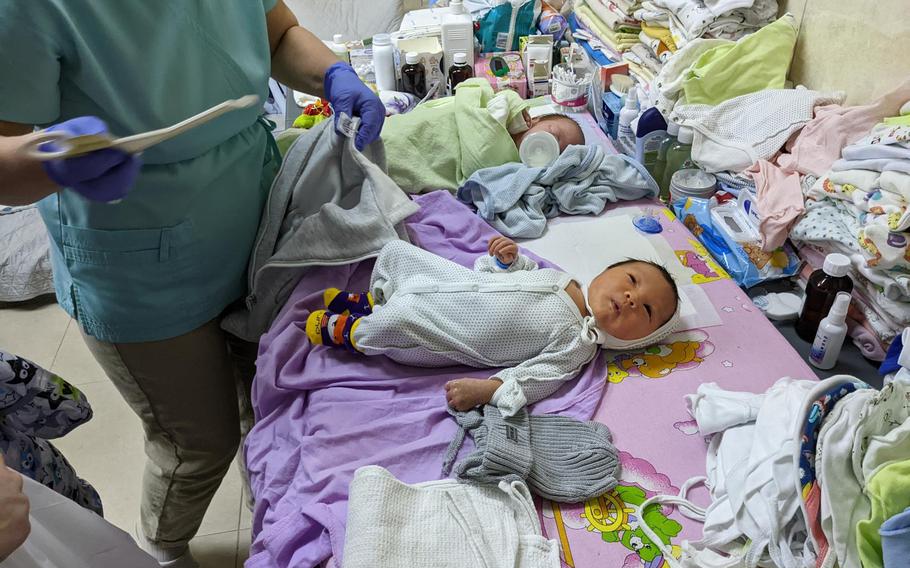 Project Dynamo's Gemini and Aquarius missions focus on bringing babies recently born through surrogacy out of Ukraine, and surrogate mothers to safer areas of the country where they can still give birth without compromising the parental rights of the child. (Project Dynamo/TNS)

The group has organized its rescue missions into several categories.

Gemini and Aquarius missions focus on bringing babies recently born through surrogacy out of Ukraine, and surrogate mothers to safer areas of the country where they can still give birth without compromising the parental rights of the child. Ukraine is one of the only countries in Europe where surrogacy is allowed, entangling expecting families around the world in the war.

Many of these people find themselves stuck in southern or eastern Ukraine, where the war has shifted since Russia was forced to retreat from its assault in Kyiv in the north.

“Most people who wanted to leave en masse have left,” Stern said, “but there’s a whole bunch of people who are stuck in the east and the south who are cut off. So instead of doing busloads, now we’re doing carloads.”

While Mariupol has been surrounded and decimated by the Russians, other territories in the south and east remain contested and can become suddenly accessible to attempted rescue missions.

The fluidity of the war could continue for some time, Stern said.

“When we were in Afghanistan, we were in the last 10 pages of a 400-page book,” he said. “Here we’re in the fifth week of World War Three. Who knows where this war goes.”