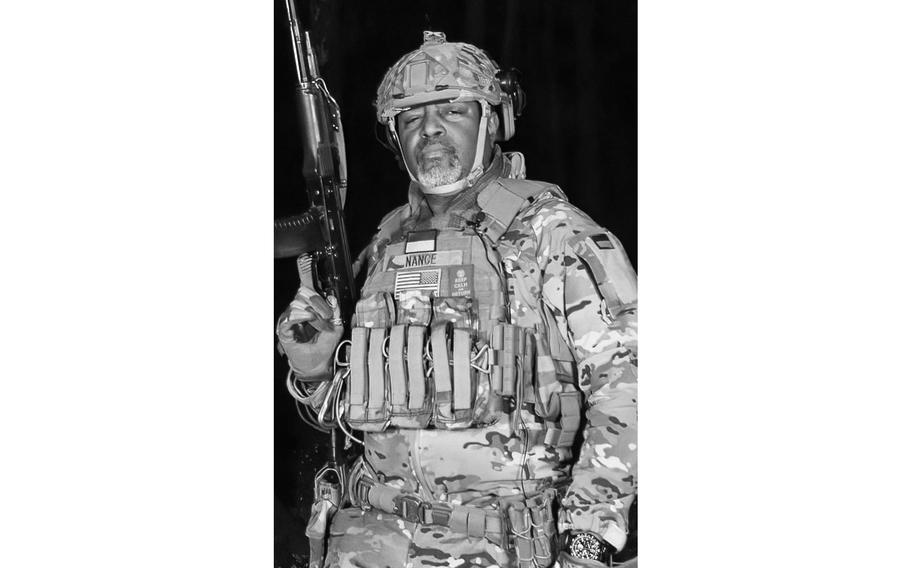 (Tribune News Service) — Former MSNBC analyst Malcolm Nance has joined the foreign military unit fighting for Ukraine and shared his experiences on Monday during an appearance on the cable news network.

On Twitter, he posted a photo of himself holding an assault rifle that he captioned: “I’m DONE talking.”

The Navy veteran elaborated while being interviewed Monday on MSNBC’s “The ReidOut.” The national-security analyst said he joined the International Legion of Territorial Defense about a month ago to fight the Russian invasion and assist in the survival of Ukraine.

“I spent quite a bit of time here in the pre-war period, and when the invasion happened, I had friends who are in Donetsk, who are in the Ukrainian army, who are writing to us and telling us, ‘We’re not gonna survive tonight. We’ve been hit 500 times,’” said Nance, who appeared on camera Monday from a secure location and wore combat gear during the interview.

Nance is no longer a contributor-analyst at MSNBC, The Times confirmed Tuesday. However, according to the Hollywood Reporter, Nance was identified as a contributor on air as recently as Feb. 28 — just four days after Russia invaded Ukraine.

On air, he told Reid that he joined the international legion — a multinational group of about 20,000 fighters — because he wanted to help his friends.

“The more I saw of the war going on, the more I thought, ‘I’m done talking, alright. It’s time to take action here,’” he said. “So about a month ago I joined the international legion here in Ukraine, and I am here to help this country fight what is essentially a war of extermination. This is an existential war, and Russia has brought it to this people and they are mass murdering civilians and there are people here like me who are here to do something about it.”

He said that their purpose “is to protect the innocent people of Ukraine from this Russian aggression.”

“It’s not a conventional war, Joy. Even though you have two armed forces going head to head here. You have another group — I won’t even refer to the Russians as an army — just using mass heavy weapons that are used in combat against civilians,” he explained.

“They are destroying infrastructure, and then you find that they go to the cities and they massacre men, women and children. And that is the fundamental reason everyone is here,” he added. “We really have to assist [the Ukrainians] in any way to stop this, so I decided I came here to assist them with the skills that I have myself.”

Before joining MSNBC, Nance was a career Navy intelligence officer and field interrogator who had been deployed for intelligence operations in the Balkans, Middle East and sub-Saharan Africa. He spent spent years in the Middle East studying Al Qaeda and went public against waterboarding torture during the George W. Bush administration.

Nance has written several books, including 2016’s “The Plot to Hack America: How Putin’s Cyberspies and WikiLeaks Tried to Steal the 2016 Election.” His 2020 book, “The Plot to Betray America,” assessed the shifting relationships between former President Trump and U.S. intelligence and military services. His latest book, “They Want to Kill Americans,” focuses on the ideologies that led to the Jan. 6 Capitol insurrection.

His arrival in Ukraine comes as Russian forces have continued their offensive in eastern Ukraine and move toward the Donbas — which includes the besieged city of Mariupol — while leaving mass casualties in their wake.

Nance said he doesn’t believe that he would be targeted by Russians, whom he repeatedly accused of war crimes.

“The war that is being waged here is being waged against everybody. They are not going around hunting for American flag patches or to see who’s Black, who’s Asian, who’s Latino,” he said, adding that they are “fighting side by side, elbow with elbow” with Ukrainian forces and that Russians are “barely” attacking Ukrainian troops.

“Their emphasis seems to be the mass murder of civilians, which seems to be against all laws of war,” he said. “These are war crimes.”