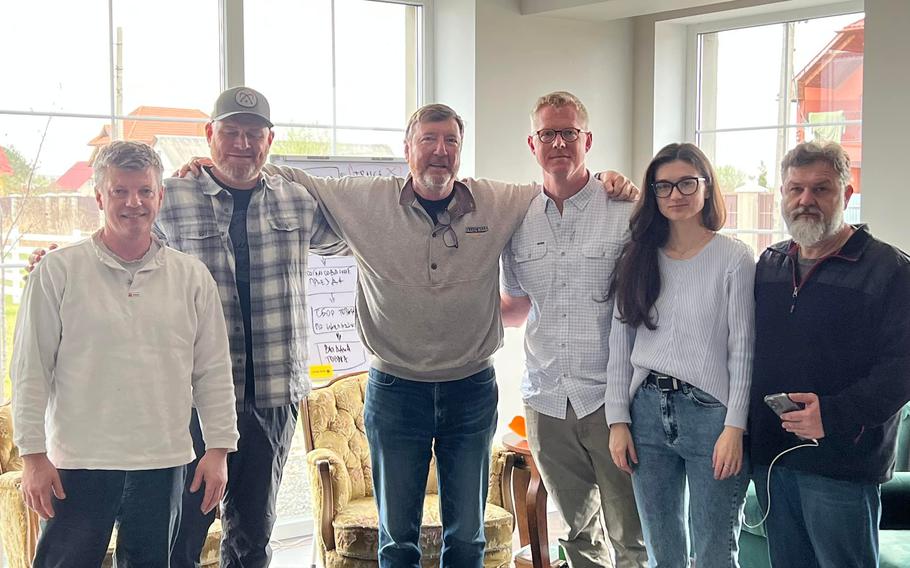 (Tribune News Service) — Steve Castlen spent two terms of Army service in West Germany, back when the Berlin Wall was still standing and the Red Army was constantly poised just on the other side of the West-East German border.

Castlen, who was a legal clerk and then a military lawyer during his tours in Germany, was very much aware of the possibility of the Soviet Union launching an attack on West Germany and the NATO alliance. But he said he has been shocked by the horror he has seen caused by Russia's invasion of Ukraine.

"Never in my life could I imagine we would have a war like this, so brutal, so evil in its scope and the extent of the pain," Castlen said Wednesday, during a phone interview from Budapest, Hungary. "I wish I was young, so I could fight. This is a cause worth fighting and dying for."

Castlen, a retired Army judge, is court administrator for the Georgia Court of Appeals. He volunteered to drive humanitarian aid and supplies into Ukraine last week.

Castlen was moving supplies for Radooga Ministries, a Christian organization that, in normal times, focuses on youth ministry, but has shifted to providing food, medical supplies and some tactical gear, such as helmets, radios and body armor.

Castlen said he became involved through Grace Church, where he is a member. One of the church's leaders, Page Williams, was organizing an effort to send supplies to Ukraine.

"(Williams said), 'I'm really in need of someone to drive material into Ukraine,' and I said, 'I'll do it,'" he said. "A week and a half later, we were on a plane to Budapest."

Castlen made several trips from Hungary and Slovakia to Mukachevo, a city in western Ukraine.

"I had to turn away so many people," Castlen said. "This is stuff they need."

Hungary is a member of the European Union, but its government is supportive of Russian President Vladimir Putin. Castlen said Hungary does not allow the movement of any military-style gear across its border into Ukraine, but his trucks were not stopped on his trips across the border.

"One of the most emotional times was there was a young couple picking (supplies) up, and they were literally crying," Castlen said. "They were overwhelmed with emotion that Americans they didn't even know brought this into the country."

Beth Williams, Radooga Ministries board secretary, said she lived in Ukraine for several years but now lives in Georgia. She said the organization is planning to send more volunteers to purchase and deliver supplies.

"The best way I can describe it is it's 9/11 every day," with constant new images of destruction, said Williams, who has had friends flee from Russian attacks on civilians in Bucha and Mariupol.

Williams said she worried people would forget about the war as the daily news cycle focuses on other things, though the war will likely drag on, and the effort to rebuild Ukraine will be a long-term process.

"The war is going to be ongoing for years," she said.

The Radooga Ministries directors in Ukraine are from Kiev, which has undergone Russian attacks and bombardment.

"They are intimately familiar with the remarkable destruction and killing," Castlen said. "No one there is untouched. They are emotionally broken."

Refugees from the fighting lined border crossings, he said.

At the Slovakian frontier with Ukraine, "I sat at the border for hours and hours (waiting to cross), and you would see this parade of misery," he said.

There were harrowing moments, although Castlen hasn't experience the war first-hand.

The truck broke down "in the middle of nowhere," he said, and it had to be towed to the Radooga warehouse. But the worst has been seeing the effect of the war on refugees.

"It's a humanitarian catastrophe," Castlen said.

People have been grateful for the aid they have received.

"The response of so many people we meet, not just at the border but in the cities, the goodwill is amazing," he said.