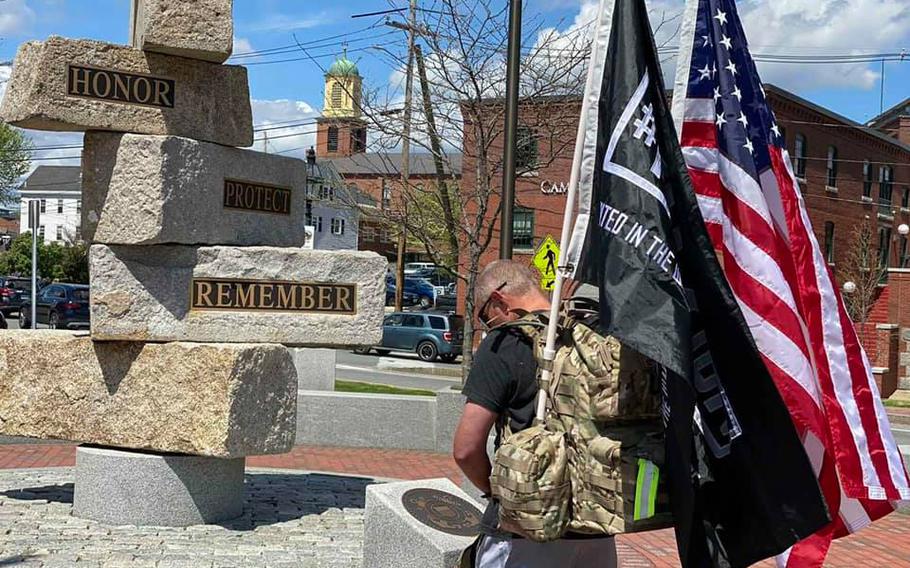 Taylor, an Air Force veteran, was accompanied by his wife, Shannon, who rode along in a Jeep. He walked for Mission 22, a veteran-based group that began in Indiana. Mission 22 provides help for treatment for post-traumatic stress and traumatic brain injury, as well as other issues veterans face.

"The concept of Jim walking 22 miles, carrying 22 pounds, and bearing a 3x5 U.S. flag and a 3x5 Mission 22 flag, represents that an average of 22 veterans in the U.S. commit suicide every day," Shannon said. "Right now, the numbers are higher than that."

Taylor walked 22.75 miles, from Wallis Sands in Rye to Hampton Beach State Park, and back again.

Shannon said Mission 22 started in 2013, initially based on art installations to raise awareness about veterans issues. As the need to help became more and more apparent, the group expanded and now has ambassadors in every state, as well as at active military bases around the world.

"We will be at the Thunder Over NH Air Show at Pease on Sept. 11 and 12, if anyone wants to come and learn more about Mission 22," she said.

"I am into the Jeep community and saw decals on vehicles," Shannon said. "I wanted to learn more and when I did, I became an ambassador. I love the way they are family-focused and community-based. They are about whole-body wellness and now have over 3,500 ambassadors and run many programs for veterans and their families."

Taylor served from 1992-1996 with the 23rd Wing (Flying Tigers), a unit that gained fame during World War II. He served during the Gulf War era in Kuwait.

Taylor's walk didn't start out as a fundraiser, but it kind of became one. Shannon said people stop him along the way to ask what he is doing, and when they find out, they donate money, which she says they will give to Mission 22.

"I did this walk for me," Taylor said. "It was important. What I didn't expect was the support from people. They see this crazy guy with this heavy rucksack and flags and want to know what I'm doing. They tell me their stories and ask if they can donate and I tell them the website for Mission 22. Many asked if they could give me money for a donation. I said, 'I guess you can, and I will make sure they get it.'"

Shannon said Taylor raised over $200 on the walk.

"It's cool and humbling," she said.

Taylor's walk came after over 200 miles logged training for the event. Now he is considering what he can do next.

"I am considering the Boston Marathon route," he said. "A week before the marathon, they do a rucksack race. I could do that, me and a few thousand friends. I am also thinking of making this walk an annual thing and maybe I can get others to join in."

More information about Mission 22 programs and resources at mission22.com.