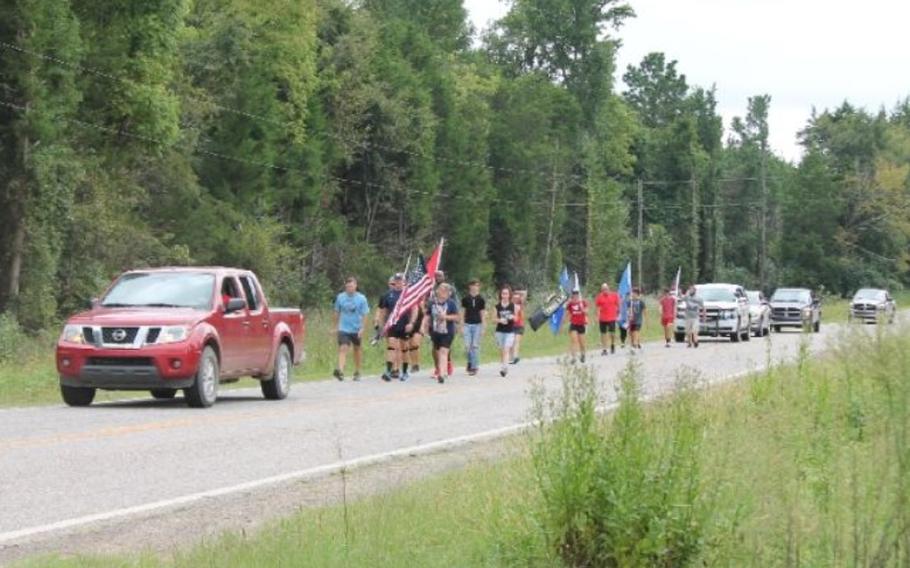 Veterans Robert Hurst and Jarrod Moore are organizing a 21-mile walk on Sept. 11 from Paris to New Blaine, Ark., to remember those who died and to raise awareness about veterans who die by suicide. (Screenshot from GoFundMe)

FORT SMITH, Ark. (Tribune News Service) — Robert Hurst is a burly man with a greying goatee. He wore a baseball cap and a red T-shirt with the sleeves cut off. His eyes welled with tears as he talked about the needs of veterans in the area.

"There is so much need for veterans, and veterans come in all shapes and sizes," Hurst said.

Hurst and Jarrod Moore are organizing a 21-mile walk on Sept. 11 from Paris to New Blaine to remember those who died and to raise awareness about veterans who die by suicide.

The 2020 National Veteran Suicide Prevention Annual Report, which is released each year by the United States Department of Veterans Affairs, found that in 2018 about 18 veterans a day killed themselves.

"It's bad enough that in these conflicts and things like that you know we lose our brothers and sisters, and people lose their husbands and wives, sons and daughters. It's bad enough for that, to lose them there in the contact. We damn sure don't want to lose them when we get back home," Hurst said.

The walk will go from the Paris Courthouse to the New Blaine Veterans of Foreign Wars location. Through the walk, the men plan to raise money for area veterans.

The money will go into a bank account that Hurst and Moore can access to help veterans in crisis.

That help comes in many different forms. It can mean building a wheelchair ramp or paying for an air-conditioning unit in the height of summer.

Moore and Hurst will accept donations at the walk. They have also created a GoFundMe that people can donate through.

Hurst and Moore said they hope that people know that the VFW is a place where veterans can get help.

"The guy down the street may have heard, he may know the VFW as a place to go get drunk and bring your own beer like it was 25 years ago," Moore said.

Hurst followed Moore's comment and said, "it's so much more than that."

Last year, Moore organized a walk on 9/11 by himself. About 85 to 100 people walked some or all of the 22 miles between the Paris and Booneville courthouses.

People can walk as much or as little of the walk as they want. Hurst said he wants people to participate however they can. That can mean cheering on the walkers from the sidelines or working a hydration station along the way.

"We want as much community participation as we can get, and we promise there's something to do for everybody," Hurst said.

The men will start the walk with a ceremony to honor those who died during 9/11. The walk will begin at 7:46 a.m. to commemorate when the first tower was struck.