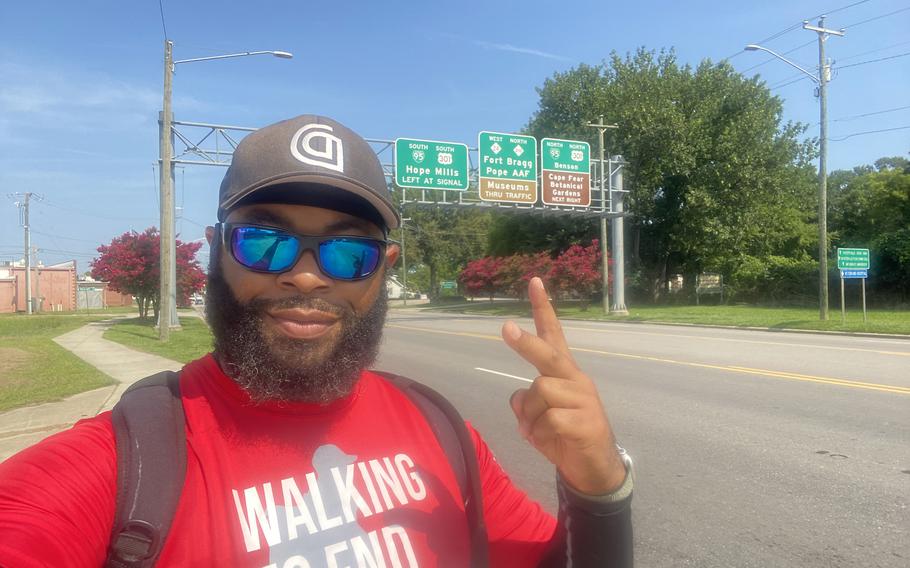 Greg Washington is an Army veteran walking from Mound Bayou, Miss., to the U.S. Military Academy at West Point, his alma mater, to raise awareness about suicide. (Greg Washington/TNS)

Always he walks with purpose.

Washington is an Army veteran walking from Mound Bayou, Miss., to the U.S. Military Academy at West Point, his alma mater, to raise awareness about suicide — the triggers, the pervasiveness, the ways to prevent it. He covers 15-20 miles a day, stopping in towns and cities along the way to host rallies where he speaks openly about some of his own darkest days and points attendees toward mental health resources in their communities.

“Suicide is just like a stray bullet,” Washington said. “It doesn’t have a name or a certain demographic attached to it.”

Washington was a freshman at West Point when terrorists struck the United States on Sept. 11, 2001. He graduated in 2005, was commissioned as an infantry officer and deployed twice to Iraq. He lost his two best friends from West Point, Emily Perez and Scott Pace.

Pace was killed in Afghanistan. Perez, the highest-ranking Black female cadet in West Point history, was killed in Iraq. She was also the first Black female officer in U.S. military history to die in combat, and she’s honored in a display called “Double Victory: The African American Military Experience” at the National Museum of African American History and Culture. Washington stopped by to see the display when he walked through Washington, D.C., in early August.

“I made a promise to Emily and Scottie that I would have their backs,” he said. “I’ve lived with survivor’s remorse, not being able to fulfill my promise to my two best friends.”

Washington said he made plans to end his own life not long ago.

His 12-year-old cousin called to invite him shopping. She got him laughing.

“That phone call saved my life,” he said. “It gave me enough time to breathe and jolted me out of that spiral of depression that sets in like a storm. It’s been an uphill battle ever since, but I tell people if they find a way to grow through it, not just go through it, they might find what they’re looking for on the other side.”

His focus is on talking up mental health supports and preventing suicide among veterans.

He supports pending legislation, called the Veteran Urgent Access to Mental Healthcare Act, that would allow Veterans Affairs to provide former service members with mental health services even if they received other-than-honorable-discharge.

He highlights his own background – captain of the Army football team, infantry officer – to reach folks who might not be accustomed to talking about their mental health.

But he’s also eager to reach any and everyone who’s living with depression or isolation or anxiety.

“In the military they teach you to handle things at the lowest level,” he said. “I talk about having a plan: Who are those three good friends, those battle buddies, who you can call and they will listen to you? Do you know the number of your primary care provider so you can make an appointment and do some preventative maintenance? Do you have the number to the suicide hotline?”

Washington started his walk in Mound Bayou because his dad’s side of the family is there, but also because its history inspires him.

The town was founded in 1887 by former slaves who purchased the 800-plus acres of swamp and transformed it into a thriving community.

“Mound Bayou is a reminder that our story is more than just pain and suffering,” Washington said. “It’s strength and grit and resilience.”

Washington plans to end his 1,800-mile walk at West Point on Sept. 11. He had just arrived in Baltimore the day we talked.

“You don’t know what people are going through,” he said, “until you actually sit down and have a conversation with them and really show them that you care.”