A simple tweak could slash carbon emissions from US military vehicles 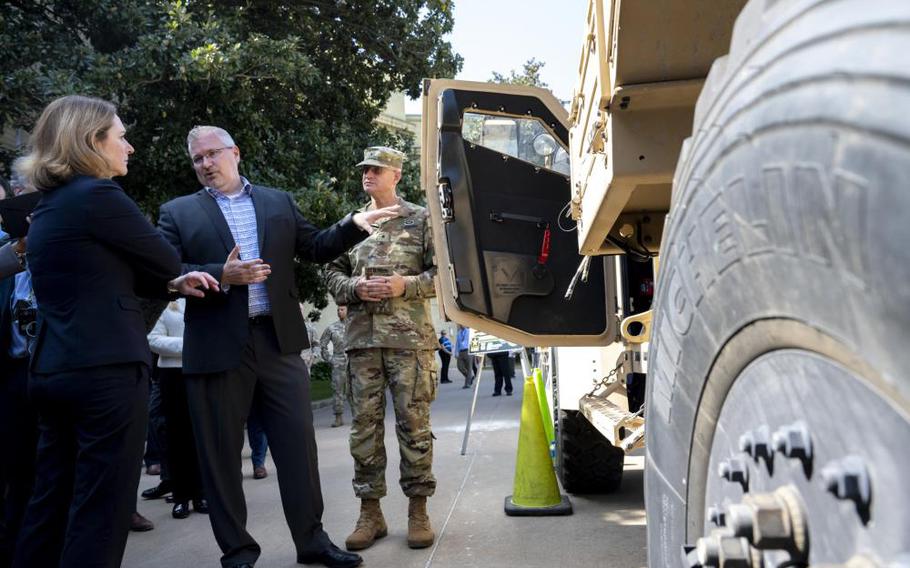 Deputy Secretary of Defense Kathleen H. Hicks tours the 2022 Pentagon Energy Expo at the Pentagon in Arlington, Va., on Sept. 21, 2022. The event showcased energy technologies being developed with the U.S. military in mind. (Lisa Ferdinando/Department of Defense)

The thrum of idling diesel engines is the background noise of U.S. military deployments around the world, as soldiers draw power from their vehicles for communications and other necessities, even when they are sitting still.

If Pentagon planners have their way, the military could soon become a lot quieter and more fuel-efficient: They are pushing to add anti-idling technology to their next-generation workhorse vehicle, the partial replacement for the Humvee.

The technology, which would turn the engine off when the vehicle is sitting still, would cut its fuel consumption by 20 percent overall. Any switch could have a big climate impact: With its big fleet and worldwide presence, the Department of Defense accounts for more than half of the federal government's carbon footprint. And saving on diesel also cuts the need to truck the fuel through hostile areas, an extra benefit for leaders scarred by years of attacks on fuel convoys in Afghanistan and Iraq.

"The warfighter purpose and the view of climate as a national security challenge are fully aligned in cases like this," Deputy Defense Secretary Kathleen Hicks said after a tour in the Pentagon courtyard of an exhibition of climate-friendly technology, including prototypes of vehicles with anti-idling technology.

The vehicles — painted the sandy tan color of a military that spent the past two decades fighting desert wars — were silent, but their radios were on and their air conditioning was whirring, a necessity for soldiers who are keeping watch in hot places.

Turning the engine off automatically when a truck isn't on the move might seem a basic step — one that many auto companies incorporated years ago. But the Pentagon sometimes makes changes slowly, partly because of the extreme demands that the military places on its equipment.

"We have to operate in extremely high temperatures in the desert down to the Arctic," Timothy Goddette, one of the U.S. Army's top officials charged with acquisitions, told a House hearing in 2021. "And then as we wrap them into armor and integrate them into very tight systems, how do we keep them cool, how do we ensure that those electronics also work in very high temperatures?"

The anti-idling system is not complicated. The vehicle gets extra lithium-ion batteries, just a little bigger than those used in regular cars. And it gets some extra equipment to automatically flip the engine back on whenever the spare power needs an extra boost. That means the vehicle briefly rumbles back to life every few minutes. In the meantime, soldiers can use their radios and other communication devices, along with air conditioning or heating, without idling the engine nonstop.

The Defense Department eventually wants to electrify more and more of its fleet, including all of its noncombat vehicles. The National Defense Authorization Act that was passed in Congress last month for the first time imposes a requirement to do so, by 2035.

The Humvee replacement, known as the Joint Light Tactical Vehicle, or JLTV, doesn't fall under the requirement, but the efforts to improve its fuel efficiency could still have a big impact. The military expects eventually to use more than 60,000 of them, so simple changes that can cut fuel use by a fifth would be significant. The same technology eventually could spread more widely.

"If you look at each vehicle, maybe that's not a lot of fuel, but when you look across the deployed force, that can be really significant," said Joe Bryan, the chief sustainability officer of the Defense Department.

Only a single prototype JLTV with the anti-idling technology has been built so far, but the Pentagon has said it hopes to incorporate it into a new round of 16,000 vehicles for which it will award a contract early this year. It is also considering retrofitting existing vehicles at a cost of $50,000 each, said Michael Sprang, who heads the Pentagon office overseeing the JLTV's design. The conversion kit weighs about 190 pounds.

The efforts haven't been met with universal acclaim. Some Republican lawmakers in Congress warn that electrifying the military will lead to a deepened dependence on China for battery supplies, at least for now.

"So much of what we use and what goes into the batteries … is coming from our adversaries," Sen. Joni Ernst (R-Iowa) told Defense News. "So, just like the movement to manufacture chips in the United States, where do the resources to develop them come from: the silica? China."

The Pentagon is seeking to ensure that it has a reliable supply of lithium and other ingredients of batteries — but it also says that despite its size, it can never match the scale of the private sector.

"Bottom line, we have to be fast followers to the commercial sector in many aspects of battery supply," said Hicks, the deputy defense secretary.

"We have made some specific investments ourselves to do that well," she said. "In addition to the batteries, it's the supply chain for the critical minerals and other aspects that we care a lot about."