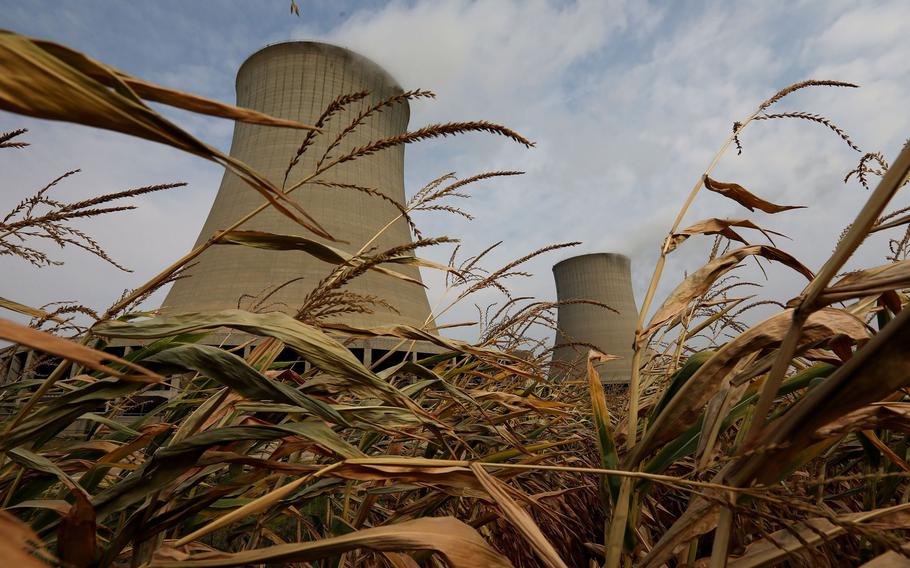 The Byron Generating Station is seen through a cornfield in Byron, Illinois, on Sept. 7, 2021. (Antonio Perez/Chicago Tribune/TNS)

In many of the states with the nation's most aggressive climate goals, officials are investing millions of dollars to save the power source that was long the No. 1 target of many environmental activists: nuclear plants.

"We are moving expeditiously toward a clean energy mix, but that is going to take a while," said Joe Fiordaliso, president of the New Jersey Board of Public Utilities. "We can't build renewables fast enough, and people still need energy. Nukes are an important interim part of the mix."

Despite long-standing safety concerns, many state leaders and some environmental groups say climate change poses a greater risk than reactors, and that preserving nuclear power will prevent an expansion of fossil fuel-powered plants. Nuclear plants provide about 19% of the nation's electricity, far more than wind and solar combined. Some activists counter that state investments in nuclear plants are coming at the expense of renewable projects, slowing the clean energy transition.

Illinois lawmakers passed a climate bill last year that included a commitment to keep two of the state's nuclear plants online for five years, even if they are losing money. The state gets more than half of its electricity from nuclear generation, and state leaders said keeping the plants open will buy more time to transition to wind and solar.

"We can build enough renewables and storage to replace those plants, but it will take years," said Jack Darin, director of the Illinois chapter of the Sierra Club. "(If nuclear plants shut down), we would see increased utilization of the existing very dirty coal plants, primarily in communities of color, and we would see huge advantages for natural gas to come in."

Several other states, primarily on the East Coast, have pumped money into aging and in some cases unprofitable nuclear plants in recent years.

Jessica Azulay, executive director with the Alliance for a Green Economy, a New York-based environmental group that fought a 2016 state deal to subsidize nuclear plants, thinks that's a mistake.

"It's an enormous amount of resources that are going to plants that are going to reach the end of their life soon anyway," she said. "If we had put that money into renewables and efficiency, we would have gotten higher greenhouse gas reductions."

Opponents also point to the environmental effects of uranium mining and processing, and ongoing concerns about the storage of radioactive waste. But reactors provide continuous, emissions-free power, advocates note, and safety standards have significantly reduced the risk of meltdowns.

The debate largely centers on the preservation of existing plants. Some experts think small, modular reactors could be developed in the future, and Connecticut and West Virginia lawmakers recently revoked state bans on new nuclear facilities partially in case that technology becomes feasible.

But the only nuclear plant currently under construction, a project in Georgia, has run into substantial delays and cost overruns.

Earlier this year, California Democratic Gov. Gavin Newsom announced that the state would seek funding to extend the life of the Diablo Canyon nuclear plant under a $6 billion federal program to support nuclear power. The plant is slated for closure in 2025 under an agreement struck with environmental and labor groups in 2016.

"If Diablo Canyon shuts down, we would have to import additional capacity from outside California, and it's all going to come from gas and coal plants," said Carl Wurtz, president of Californians for Green Nuclear Power, an advocacy group that supports the industry. "We need to put into proportion the dangers of nuclear versus the dangers of climate change."

Wurtz said California regulations make it difficult for power plants to remain profitable after their capital costs have been paid off because of rules that decouple profits from the amount of electricity sold, putting Diablo Canyon at a disadvantage. Newsom's office did not respond to a request for comment. Pacific Gas & Electric, the plant's operator, said plans to decommission the plant starting in 2025 are "full steam ahead."

Anti-nuclear activists point to PG&E's application to shut down Diablo Canyon, which said the plant's large, inflexible power load may be crowding out renewables, and leaving the plant online could increase the costs of adding wind and solar to the grid.

"The nuclear plant actually blocks bringing on more renewables," said Jane Swanson, president of San Luis Obispo Mothers for Peace, an advocacy group that opposes the plant. "The loss of electricity from Diablo Canyon is not going to cause more fossil fuels to be used."

A similar debate is going on in New Jersey, where regulators last year renewed for three years a $300 million annual subsidy to keep three plants open. Nuclear power supplies 35% of the state's electricity, according to Fiordaliso, the state official.

Jeff Tittel, a longtime environmental activist in New Jersey, was serving as the director of the state's Sierra Club chapter when the subsidy was created in 2018. He is in favor of keeping the plants open but said the state bailout was wasteful.

"They hid behind climate change as an excuse for the subsidy, and all the subsidy has been doing is enriching the stockholders," he said. "This is money that could be used for wind and solar."

In Connecticut, officials made a deal in 2019 to procure power from the state's Millstone nuclear plant for 10 years, part of a suite of projects for carbon-free electricity. According to state Sen. Norm Needleman, a Democrat who chairs the Energy and Technology Committee, the agreement provided a fixed price for the plant's operator, Dominion Energy, allowing enough certainty to leave Millstone online.

Surprisingly, that price has saved ratepayers money in recent months, as the costs of other forms of energy have skyrocketed. The state is likely to seek an extension of the deal, he said.

"If you build your whole grid around intermittent renewables, you have times and days of the year where you don't have any wind or sun," Needleman said. "Baseload power is critical, and nuclear is the cleanest form of baseload power."

Save the Sound, a regional environmental nonprofit, initially pushed back on Connecticut's attempts to subsidize nuclear power, but the group's leaders now want to keep the plant open as an interim step.

"Sometimes there's a tendency to engage in magical thinking where the perfect vision of the future is immediately achievable," said Charles Rothenberger, the organization's climate and energy attorney. "This facility is currently providing significant amounts of zero-carbon energy, and we should be using that to give us the time we need to ramp up our clean renewables, but it can't dampen our investments."

In New York, the state's 2016 subsidy deal to prop up its nuclear industry is on track to cost ratepayers $7.6 billion by 2029, said Azulay, the New York activist.

"The state was being threatened with multiple reactor shutdowns all at the same time unless the state came up with a bunch of money to subsidize them," she said. "We could have gotten more energy efficiency and renewables for the money, but now we're just tying up money in something that's more expensive."

New York officials dispute that characterization. Nuclear power made up 24% of the state's electricity in 2021, according to the New York Department of Public Service.

"Had these upstate nuclear power plants abruptly closed, carbon emissions in New York would have increased by more than 15.5 million metric tons annually, resulting in public health and other societal costs of at least $700 million annually," James Denn, an agency spokesperson, said in a statement.

In Illinois, the agreement reached to keep the state's nuclear power online has saved ratepayers money. While lawmakers committed to supporting plants if they couldn't remain profitable, they also limited the amount that energy companies could earn if prices increased. Rising prices for fossil fuels have made nuclear much more profitable, generating a refund for customers.

"Reactors are more vulnerable to these natural disasters than they were designed for," he said, pointing to the 2011 nuclear meltdowns at Japan's Fukushima Daiichi plant after a tsunami.

But nuclear backers say the industry has learned from such high-profile disasters, and that American plants have high safety standards. They also note that far more people die every year because of pollution caused by fossil fuel-powered plants than have been killed in nuclear disasters.