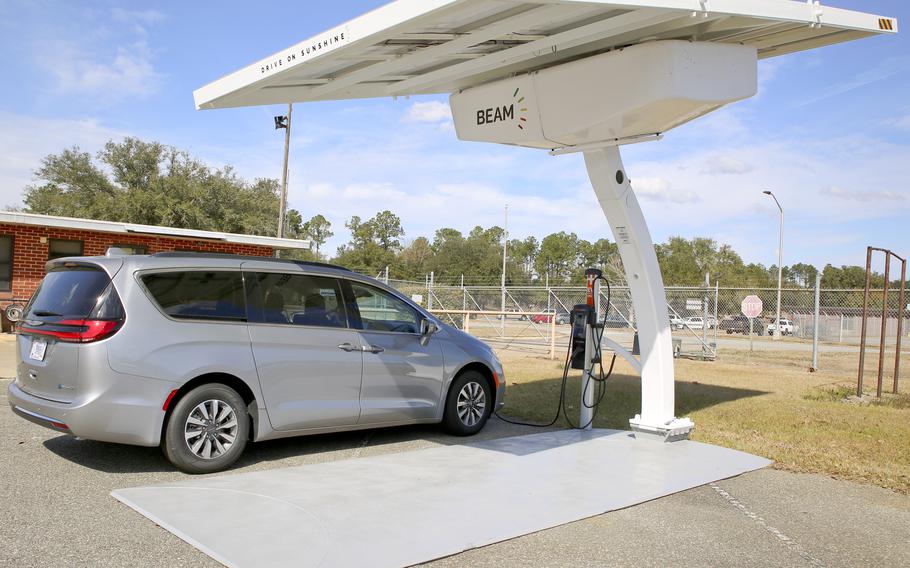 The effort consists of 21 charge points at nine locations throughout the installation as well as underlying infrastructure to support new requirements and ease future EV charger installation. MCLB-Albany is moving forward after taking advantage of Georgia Power's "Make Ready" program, through which the utility is providing funding to construct the infrastructure between the existing electrical grid and new chargers.

Officials with Georgia Power said this project could allow up to 96 vehicles to be plugged in on the base simultaneously.

"Marine Corps Logistics Base-Albany is actively moving forward building the necessary infrastructure to support electrical vehicles of all types," Col. Michael Fitzgerald, commanding officer of MCLB-Albany, said. "These upgrades are required as market forces push the electrification of commercial vehicles and equipment. Part of the Make Ready program requires us to look beyond the surface of installing charging stations, but also upgrading the power grid to support Level II chargers to efficiently and effectively re-charge vehicles in a timely manner to support mission requirements.

"We must plant the seeds of Make Ready today to have them flourish in the future to support an entire commercial electric vehicle and equipment fleet of tomorrow, while supporting mission requirements of today."

The Level II charger is served at either 208 or 240 volts and typically uses about six kilowatts of energy per hour.

Naval Facilities Engineering Command signed the task order for the MCLB-Albany turnkey electrification project on Set. 27. This is a public/private partnership to implement the first-ever turnkey electric vehicle supply equipment solution using the GSA areawide contract. MCLB-Albany is receiving approximately $800,000 in Make Ready dollars, while Marine Corps Installations Command is funding the remaining approximately $1.2 million for Georgia Power to provide charging as a service where the company will own, operate and maintain the equipment.

The GSA areawide contract, authorized under 40 U.S.C. 501 and FAR Part 41, provides for a public/private partnership with regulated servicing utility companies to cover utility service needs of federal agencies within the franchise territory of the supplier for up to 10 years. This unique federal construct allows MCLB-Albany to use Make Ready to accelerate its plans and maximize the government's investment.

This project will be the model for the Department of Defense to use across the country in partnering with a local utility to design, construct, operate and maintain EVSE. It is also the first time the GSA areawide contract will be used to provide for a holistic and scalable EVSE solution to support both current and future electrification requirements.

The chargers being installed as part of the project at MCLB-Albany will be exclusively for government vehicles.

The Make Ready program allows customers to apply for funding to assist in the infrastructure required to support electric transportation charging systems. Officials with Georgia Power said this funding came together as a part of the 2019 rate case designed to help remove barriers to EV adoption.

"Georgia Power is always focused on finding ways to partner with our customers to meet their energy needs, and we are proud to have played a part in this electric vehicle supply equipment project," Les Charles, federal, state and military key account manager for Georgia Power, said. "This is just one example in a long list of projects where MCLB-Albany and Georgia Power teamed up to create a solution, in this case, positioning the installation to maintain a 100% zero-emission fleet. Georgia Power looks forward to supporting MCLB on future endeavors, helping them accomplish their assigned mission."

The workings of this project date back to roughly a year ago. MCLB-Albany was on the heels of announcing its achievement of the net-zero milestone for electricity at the time, something else Georgia Power was instrumental in.

"We have a good working relationship with Georgia Power," Lt. Cmdr. Michael Feeney, the public works officer at MCLB Albany, said. "We pitched the Make Ready program to pay for part of the charger installation."

Officials within MCLB-Albany looked at the practicality of this method and decided to go for it.

"This is part of a transition to an all-electric fleet," Feeney said. "We got $1.2 million in funding (for the chargers), and Georgia Power is going to install the infrastructure required to serve them.

"This fits into the (Biden administration's) plan for an all-electric fleet."

The $1.2 million from MCICOM covers installation of the chargers and necessary electrical upgrades, including transformers and meters. Georgia Power estimates the installation to be completed within a window of roughly eight months.

"This achievement is an outstanding example of how GSA areawide contracts can be utilized for electric vehicle infrastructure," MCICOM Public Works Director Walter Ludwig said. "Innovative contracting is an often-overlooked tool in the fight to achieve the zero-emission vehicle targets set by this administration and to ensure the success of the warfighter."

A mandate to make the federal fleet all-electric was included in an executive order signed by President Biden on Jan. 27. A policy letter issued by Headquarters Marine Corps two months later said planning was underway for the transition of all government fleets.

Conversion of all federal fleet acquisitions to zero-emission vehicles is expected by 2035.

"This effort will require collaboration across many functions and organizations in the Marine Corps to ensure that electrification is achieved in concert with transportation mission requirements and that it is supported with the necessary EVSE charging infrastructure," the policy letter, signed by Brig. Gen. Daniel Conley in March, reads. Conley was the commander of MCICOM and assistant deputy commandant for Installations and Logistics (Facilities) at HQMC at the time of his retirement in June.

The policy mandated transitions occur immediately where feasible, and that electrification would be taken into account in installation master plans and leased facility negotiations. Such efforts are also helping the Marines achieve the targets outlined in the Department of the Navy Climate Action 2030 climate strategy released earlier this year.

The Marine Corps placed an order in October 2021 for 21 mobile solar-powered electric vehicle charging systems to be deployed across 14 Marine Corps bases in the continental U.S. and Hawaii. MCLB Albany received one unit, used mostly on hybrid vehicles, although it can be used on any green vehicle.

This serves to demonstrate a commitment of MCLB-Albany to green energy, which far pre-dates Biden's directive.

"We had these plans in place before the executive order," Feeney said. "We saw electric vehicles coming. We came out as already well down the way with this."

The solar unit was purchased through GSA. It is an energy resiliency and energy security asset that can be relocated to charge vehicles in the event of power failures, natural disasters or emergency situations.

Solar panels and a high voltage electrical system are among the number of things to have come from the base's partnership with Georgia Power.

Having the incoming charging infrastructure in place further reinforces the net-zero energy milestone MCLB-Albany has become well known for.

"Because we produce our own electricity, the power to charge these is almost free," Feeney said.

Net-zero, in the context of MCLB-Albany's energy usage, is defined as the production of as much electricity from renewable "green" energy sources as it consumes from its utility provider.

"We are taking net-zero and growing it to the fleet," Feeney said. "We are the net-zero for electricity in our facilities. Now we are applying that to the equipment."