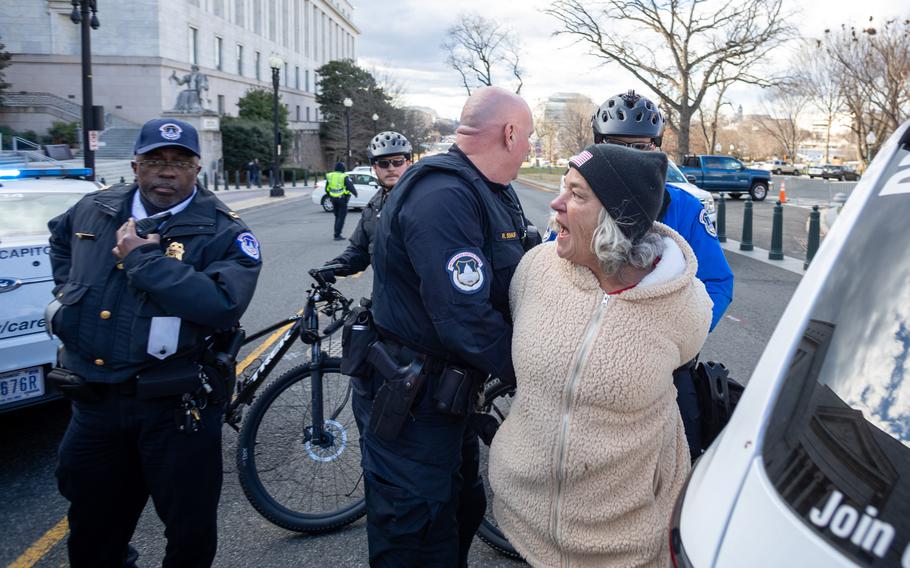 Officers take Micki Witthoeft, the mother of Ashli Babbitt, by the arm after she refused police warnings to move from the street onto the sidewalk. (Kyle Anderson/for The Washington Post)

WASHINGTON — Micki Witthoeft, the mother of Ashli Babbitt, was arrested for blocking traffic on Capitol grounds on Friday, the two-year anniversary of the death of her daughter after she stormed the building in a pro-Trump mob.

Witthoeft, 58, was arrested around 1:45 p.m. for failing to obey police orders and blocking and obstructing roadways, according to a statement from U.S. Capitol Police. The group did not have a permit to demonstrate, the statement said, and Witthoeft “asked to be arrested.”

As is routine in these types of arrests, she was processed, given a citation to appear in court and released, the statement said.

Witthoeft and her supporters were blocking traffic on Independence Avenue, SW, near First Street, SW., when Capitol Police officers and officials approached the group, directed them to move to the sidewalk and warned that if they did not, they would be arrested, according to the statement.

Witthoeft then turned her back to police and placed her hand behind her back, the video shows. “Go ahead,” the officer said, as officers took Witthoeft by the arms toward a police vehicle.

Babbitt, an Air Force veteran, was fatally shot by police on Jan. 6, 2021, as she tried to leap through the broken window of a door inside the Capitol. Witthoeft and supporters shouted Babbitt’s name Friday as officers led Witthoeft into the police vehicle, according to another video posted on YouTube.

Earlier in the day, that video showed Witthoeft speaking to supporters outside the U.S. Supreme Court.

“As we stand in front of this building that says ‘equal justice under the law,’ let’s seek that,” she said. “Let’s make that attainable.”