The most intriguing revelations, new evidence from Jan. 6 transcripts 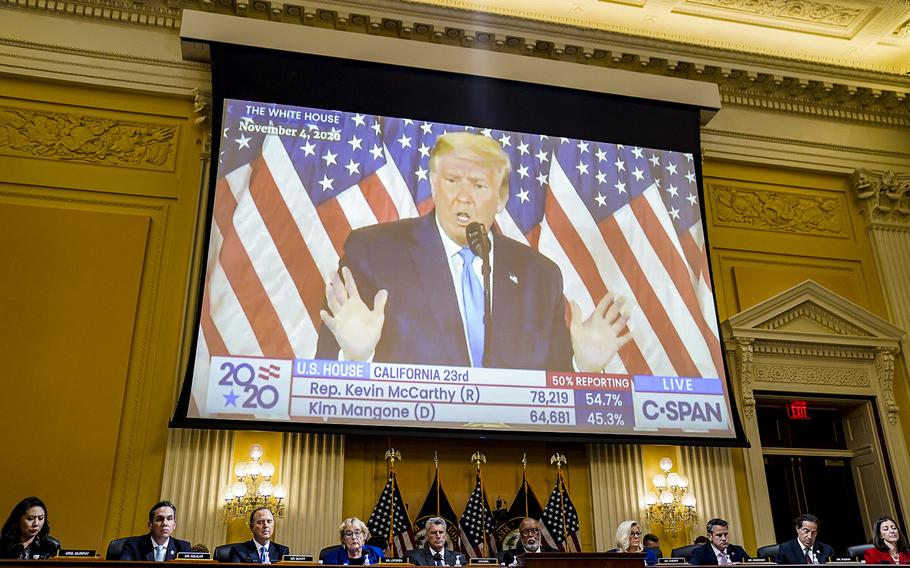 Former President Donald Trump is projected on a monitor during a hearing of the House Select Committee to Investigate the January 6th Attack on the United States Capitol in the Cannon House Office Building on Thursday, Oct. 13, 2022, in Washington, D.C. (Kent Nishimura, Los Angeles Times/TNS)

The congressional committee that investigated the Jan. 6, 2021, Capitol riot spent the past two weeks publishing thousands of transcripts, emails, text exchanges, videos and other documents to back up the findings of its 845-page report.

The material, released in batches over the holidays, provides a detailed account of what happened that journalists, academics and researchers will pore over for years. The committee raced to release the documents before Tuesday, when Republicans took control of the House.

The committee's most important revelations were disclosed in hearings throughout 2022, but the material released in recent weeks offers new insights. Here are some of the most intriguing findings from the committee's documents:

Hicks said she and others would be labeled 'domestic terrorists'

On the night of Jan. 6, Hope Hicks — one of Trump's longest-serving and most loyal aides — exchanged text messages with Julie Radford, who was Ivanka Trump's chief of staff.

"I'm so mad and upset," she wrote, according to text messages released by the committee. "We all look like domestic terrorists now."

But Hicks had one particular topic on her mind: her future career and that of others closely associated with Donald Trump. "All of us who didn't have jobs lined up will be perpetually unemployable," she wrote.

"She has no idea that this has made us all unemployable," she continued, adding, "like untouchable."

A couple of days before the riot, the White House press office began to use this vague language to announce Trump's public schedule: "President Trump will work from early in the morning until late in the evening. He will make many calls and have many meetings."

The explanation for this puzzlingly nonspecific "schedule," according to deputy press secretary Judd Deere's testimony to the committee, was simple: It was news to Trump that for nearly four years his schedule had been broadcast at all.

"Beginning sometime around mid to late December," Deere said, "the President discovered that, for the first time, my understanding, that we released a public schedule of his to the public. He wanted to change the way we did that."

Conservative activist Virginia "Ginni" Thomas, the wife of Supreme Court Justice Clarence Thomas, told the committee that while she recognizes Joe Biden is the current president, she continues to have concerns about the validity of the 2020 election results.

"I just think there's still a lot of things that are still being uncovered," she said, aligning herself with "millions of Americans" who think the election was marred with fraud and irregularity.

When committee member Rep. Jamie B. Raskin (D-Md.) pressed her to describe the fraud allegations she found most concerning, Thomas said she didn't know of "specific evidence."

"I was just hearing it from news reports and friends on the ground, grass roots activists who were inside of various polling places that found things suspicious," she said.

Thomas' post-election activities have raised questions about whether her husband should recuse himself from cases involving the 2020 election or attempts to overturn it.

She testified that her involvement in efforts to challenge the 2020 election had been overblown in the press and that she never speaks to her husband about cases pending before the court.

In the run-up to the Capitol riot, Oath Keepers founder Stewart Rhodes and white nationalist Nick Fuentes got into a heated argument in Atlanta after Rhodes refused to provide Fuentes with security because of his white supremacist views, according to Oath Keepers lawyer Kellye SoRelle.

As Fuentes taunted him, Rhodes walked away. SoRelle, whom prosecutors have described as Rhodes' girlfriend, said she flipped Fuentes off.

"And he tells me he's the future of the Republican Party, and I was like, no, over my dead body," SoRelle told the committee.

A jury in November convicted Rhodes of seditious conspiracy. SoRelle in September was charged with obstructing an official proceeding, tampering with documents and other crimes. She has pleaded not guilty.

Fuentes drew national attention in November when he had dinner with Trump at the former president's Mar-a-Lago property in Florida.

Guilfoyle confused a right-wing activist's name with 'what terrorists yell'

Kimberly Guilfoyle, who briefly spoke at the rally ahead of the Jan. 6 attack, mistook a Stop the Steal organizer's name with "what terrorists yell" during her interview with congressional investigators.

"Do you know somebody named Ali Akbar?" one investigator asked, using another name for Ali Alexander.

"No. Isn't that what terrorists yell?" Guilfoyle responded, apparently referring to "Allahu akbar," the Arabic phrase that means "God is great."

When the investigator started to explain the name, Guilfoyle interjected, "Ali Akbar. No, I think it is. Am I wrong?"

Trump put pressure on officials in several swing states immediately after he lost the election, but he waited nine months to contact Robin Vos, the Republican speaker of the Wisconsin Assembly. Vos told investigators he first talked to Trump about the election in August 2021, after Vos had launched a partisan review of the election at taxpayer expense.

Trump's approach was far different in Georgia, Arizona and Michigan, where he pressed Republican officials to try to reverse the results in the weeks after the election.

In all, Trump talked to Vos about 10 times, Vos testified. Their first discussion about the election was set up by Reince Priebus, Trump's former chief of staff and Vos' college roommate.

Their last conversation occurred in July 2022, a day after the Wisconsin Supreme Court ruled ballot drop boxes were illegal in the state. The call ended badly, with Trump mentioning Vos' upcoming primary against little-known Republican Adam Steen. Trump went on to endorse Steen, but Vos squeaked through his primary.

The most notable feature of the 249-page transcript of Trump son-in-law and White House adviser Jared Kushner's interview is the number of times Kushner testified to the committee that he did not have clear memories of events they were inquiring about.

Over and over, Kushner testified that he was not paying close attention to discussions around the 2020 election or the Jan. 6 congressional session because he was devoting all his energies to other matters, notably negotiating term-ending peace deals in the Middle East and sifting through requests for pardons from Trump. He told the committee that he could not remember when conversations about the session started — nor did he ever talk to his wife, Ivanka Trump, about her interactions with Trump on Jan. 6.

On that day, Kushner testified that he was flying back to D.C. from a marathon negotiating session in the Middle East. He said he was alerted to brewing violence near the Capitol while still in the air in a phone call from White House attorney Eric Herschmann. He said the Secret Service advised him not to go to the White House after landing so he went to the couple's home in the Washington neighborhood of Kalorama.

He was stepping into the shower, he testified, when he received a phone call from House Minority Leader Kevin McCarthy (R-Calif.).

"I could hear in his voice that he really was nervous, and so, obviously, I took that seriously," Kushner testified. After that, he put on a suit and headed to the White House, arriving after the Capitol was cleared of rioters.

Difference of opinion at the Pentagon

The committee detailed extraordinary strains on the Pentagon and National Guard leaders before and during the Jan. 6 attack — and a fundamental difference of opinion in how to deploy Guard members during the emergency.

Senior Pentagon leaders said that as rioters smashed their way into the Capitol, police officials sought help from the D.C. National Guard as soon as possible but did not have a well-rounded plan to incorporate Guard members safely. Police officials and the former commanding general of the D.C. National Guard, William Walker, told investigators that if Pentagon leaders had not placed additional restrictions on the usage of Guard members before Jan. 6, they would have been able to help more quickly.

The upshot is a disagreement that still isn't resolved. Senior Army officials and D.C. National Guard leaders even disagree on whether the Army issued approval for the Guard to deploy about 4:30 that afternoon, as Pentagon leaders recall, or if it came after 5 p.m., as Walker and members of his staff say.

The Washington Post's Amy Gardner contributed to this report.