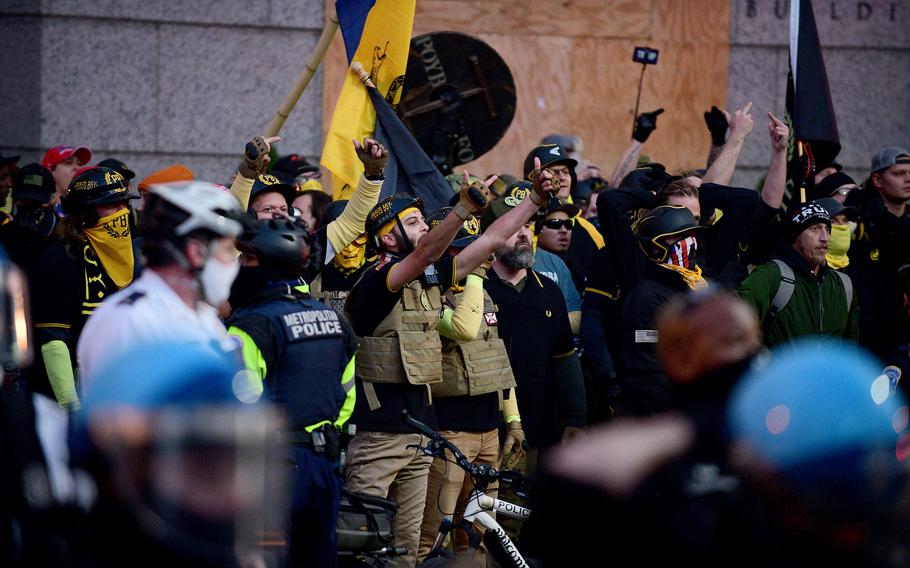 WASHINGTON — The trial of five members of the Proud Boys on charges of seditious conspiracy, with the defendants including the group’s longtime chairman, Henry “Enrique” Tarrio, is heading into its second week without a word of testimony being heard.

That is because the federal district court has been struggling to find 12 D.C. residents who can put aside preconceptions of a group that was involved in violent altercations not just at the U.S. Capitol on Jan. 6, 2021, but on city streets in the weeks leading up to the riot.

Most potential jurors appearing in court have said they have heard of the Proud Boys — and not positively.

“They conquer through fear and terror,” one said. On Jan. 6, they “fired people up with a significant amount of dangerous rhetoric and misinformation to engage in violent activities,” said another. Potential jurors have described the Proud Boys as “white nationalists,” “white supremacists” and “white separatists.”

These are the people who made it past a questionnaire sent out to a wider group; disqualifying responses to that survey included, “The Proud Boys are fascist Nazis and I hate them all,” and “I’d be thrilled to find them guilty.”

The Proud Boys say they disavow racism, and Tarrio is Afro-Cuban. But the group is explicitly anti-immigrant. Racist, sexist and antisemitic commentary is common among members. Prosecutors intend to show at trial a video where, at a pre-Jan. 6 protest in D.C., a member of the group punches a Black woman in the face.

The woman had a knife and the move was defensive, according to the lawyer representing defendant Ethan Nordean. But he and the other defense attorneys expressed concern about the emotional impact of that evidence. That means they are looking for jurors who not only lack a negative perception of the Proud Boys but express no strong feelings about the Holocaust, the Black Lives Matter movement, women’s rights or gay rights.

Several of the more than 900 people federally charged in the Capitol riot have tried to have their trials moved out of D.C., asserting that a fair jury cannot be assembled in the city. Defense attorneys have argued that District of Columbia residents view themselves as victims of the Jan. 6 attack and are subject to huge amounts of pretrial publicity. The lawyers also say that the heavily Democratic city voted for Joe Biden over President Donald Trump in 2020 by wider margins than observed in other jurisdictions. But no judge has granted a request to move a trial in the Capitol attack cases. And judges in non-Jan. 6 cases regularly reject claims of a potentially prejudiced jury, saying skilled lawyers and judges can weed out and prevent juror bias.

Defense attorneys in the Proud Boys case are able to eliminate 12 potential jurors from the pool before U.S. District Judge Timothy B. Kelly ultimately seats a panel. (Prosecutors can remove six.). But the defense is trying to save its strikes by getting the judge to dismiss jurors as biased. Defense attorney Steven Metcalf, representing Dominic Pezzola, filed a motion in December asking for more opportunities to dismiss potential jurors. At the time, he noted, three times as many jurors had been eliminated as qualified.

“Some twenty or more prospective jurors have come into the courtroom and admitted they regard Proud Boys and defendants as ‘violent,’ ‘racist,’ ‘extremists,’ ‘terrorists,’ ‘dictators,’ or worse,” Metcalf wrote. “Several jurors have openly indicated that the Proud Boys scare them, are part of the ‘white supremacist’ movement, ‘white nationalists’ or played a predominant role in the attack on the Capitol on January 6th.”

Pezzola is accused of leading the smashing of a window on the Senate side of the Capitol building with a riot shield taken from police the day of the riot. Along with Tarrio, Nordean and Pezzola, Joe Biggs and Zachary Rehl also are facing trial. An indictment accuses the men of mustering and coordinating the movements of hundreds around the Capitol and fomenting the riot. Tarrio, who was not in Washington that day, has denied wrongdoing and denied that his group planned to commit violence that day.

Early in jury selection for the Proud Boys trial, many potential jurors were excused. One said he was “maybe not 100 percent impartial” and specifically recalled that Proud Boys had been involved in violence in the District before Jan. 6. Another was allowed to leave after saying that her partner’s grandparents died in the Holocaust, that she understood some groups mentioned in the juror questionnaire were Holocaust deniers and that she therefore would have difficulty being impartial.

Kelly has allowed some jurors into the pool over defense objections. Among those in the pool are a social justice advocate whose brother was killed by a D.C. police officer last year.

“I’m a Black woman in America,” she said. “I can hold many beliefs.”