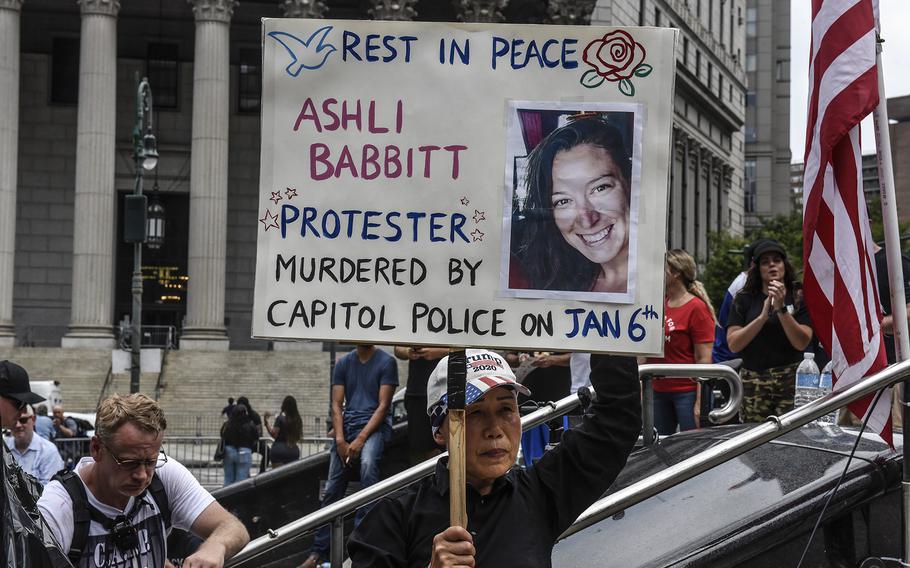 A protester holds a sign about Air Force veteran Ashli Babbitt while participating in a political rally on July 25, 2021, in New York City. (Stephanie Keith/Getty Images/TNS)

(Tribune News Service) — The family of Air Force veteran Ashli Babbitt — the woman shot dead while storming the U.S. Capitol on Jan. 6, 2021 — still hasn’t filed the wrongful-death suit for which their legal team raised $460,000, a news outlet in her former hometown reports.

Babbitt was felled by a single shot fired by a Capitol Police officer defending members of Congress as rioters attempted to stop the certification of President Joe Biden’s 2020 electoral win. Lt. Michael Byrd, who was cleared of any wrongdoing, fired at Babbitt as she stormed through a door leading into the House of Representatives chamber.

According to the CBS 8, an attorney for Babbitt’s family has made repeated claims he would file a $10 million wrongful-death suit on their behalf, but that has not happened. That attorney reportedly said last year the suit would be coming soon.

Neither Babbitt’s widow or the family lawyer responded to the San Diego news station’s requests for information. The online fundraiser page says it “is currently disabled and can not receive new donations.”

CBS said that Thursday’s opening arguments from the congressional committee investigating the Jan. 6 riot at the U.S. Capitol “hit close to home for San Diegans,” in light of Babbitt’s death. The 35-year-old Air Force veteran had reportedly become an adamant Trump loyalist who appeared to have bought into his lies about the election being stolen. Babbitt drove cross country to attend the “Stop the Steal” event where she found herself mortally wounded on the Capitol floor, wrapped in a Trump flag she was wearing as a cape.

Some right-wingers have come to see Babbitt as a martyr. Others view Byrd and the police officers who fought off the attack as the heroes of Jan. 6. Trump said Babbitt was “murdered” and spread conspiracy theories about her killing.

Terry Roberts, who represents Babbitt’s family, conceded in April 2021 that what Babbitt did may have been illegal, but claimed there was no need to shoot her.

“There was just no legal justification to take her life,” he told WUSA. “We don’t shoot protesters in this country unless they’re an immediate threat to somebody.”

Byrd told NBC News in August that had Babbitt and her cohorts succeeded in entering the chamber, those inside would have no escape.

“If they get through that door, they’re into the House chamber and upon the members of Congress,” the officer said.

The Department of Justice announced in April 2021 that an investigation into the incident revealed Byrd did not act improperly.

In September, Babbitt’s brother Roger Stefan Witthoeft was charged with a hate crime resulting from an altercation with a San Diego utility worker. According to The San Diego Union-Tribune, he unsuccessfully requested last month that a judge divert prosecution in that case on account of the “extreme stress and trauma” caused by his sister’s death. Witthoeft was also reportedly charged with battering a man he felt was slow in helping a disabled person get out of their car in January. He pleaded not guilty in both cases.

New footage revealed by the Jan. 6 Committee on mainstream news networks Thursday offered further insight into the violence of that occurred after Trump told followers once more that day the election had been stolen from him. Testimony leading up to the hearings seems to indicate people in the former president’s inner-circle, including his daughter Ivanka, did not believe the lie being pushed by the 45th president.