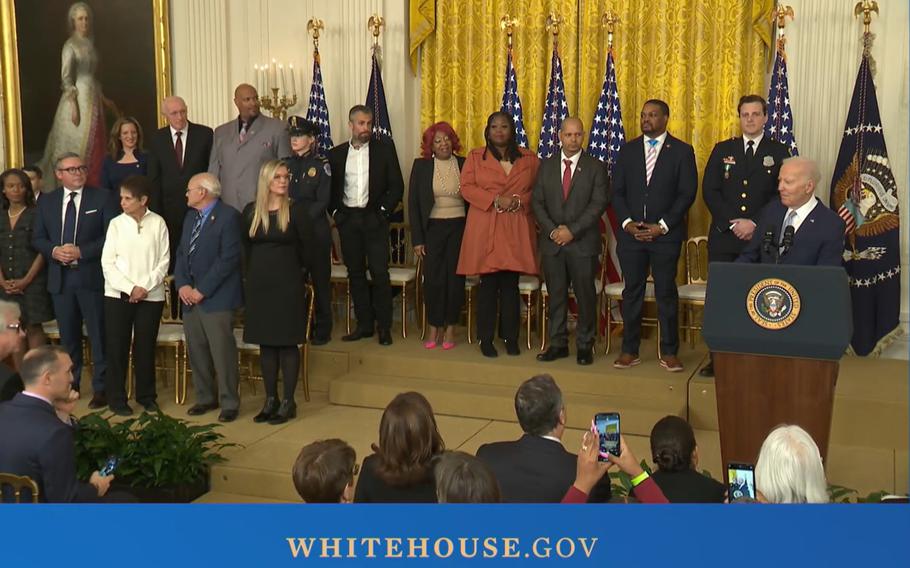 President Biden marked the two-year anniversary of the Jan. 6, 2021, assault on the U.S. Capitol by honoring more than a dozen people who helped protect and uphold American democracy leading up to and on the day of the insurrection. (The White House/Twitter)

WASHINGTON — President Biden marked the two-year anniversary of the Jan. 6, 2021, assault on the U.S. Capitol on Friday by warning of continued dangers posed by “the “big lie” and honoring more than a dozen people who helped protect and uphold American democracy leading up to and on the day of the insurrection.

Biden’s comments came against the backdrop of a chaotic four days in the House of Representatives, where Rep. Kevin McCarthy (R-Calif.) has failed to garner enough votes to become speaker over 13 ballots, a public display of disarray that Biden called “an embarrassment” on Wednesday. McCarthy won a significant number of Republican holdouts on Friday but still does not have enough votes to become speaker.

Some Democrats have argued that the chaos in the House was a relic of Jan. 6, as the nation has clearly failed to overcome bitter political divisions. Many of the holdouts continue to baselessly claim the 2020 election was stolen and have remained loyal to former president Donald Trump.

The ceremony Friday marked the day a violent mob of Donald Trump’s supporters stormed the Capitol to try to stop the certification of Joe Biden’s election. Five people died as a result of the attack, including Brian D. Sicknick, a Capitol Police officer who died of injuries sustained defending the Capitol who was honored posthumously on Friday. Four other police officers with the Capitol Police and D.C. police died by suicide in the days and months after the attack.

“He lost his life protecting the citadel of democracy,” Biden said of Sicknick. Then, speaking directly to Sicknick’s family, Biden added: “I know you’re proud of the honor being bestowed on Brian. But I also know this difficult moment brings back everything as if it happened this very day.”

More than half of the honorees receiving the Presidential Citizens Medal in the East Room of the White House were law enforcement officers who defended the Capitol against an angry mob spurred on by Trump’s unfounded claims of a stolen election. Other awardees were elected officials and poll workers who sought to fairly count ballots and uphold election results amid an intense pressure campaign from Trump and his supporters to overturn them.

Ruby Freeman and Shaye Moss, a mother-and-daughter duo who both served as election workers in Fulton County, Ga., also received the medal. The two endured threats and harassment after the election.

“Both of them were just doing their jobs until they were targeted and threatened by the same predators and peddlers of lies that would fuel the insurrection. They were literally forced from their homes, facing despicable racist taunts,” Biden said of Freeman and Moss.

The medal is one of the country’s highest civilian honors and is given to those who have “performed exemplary deeds of service for their country or their fellow citizens.” Biden also honored state and local officials from Arizona, Michigan and Pennsylvania who all resisted pressure to overturn election results and ensured the vote count continued.

Biden has warned several times of the threats posed to American democracy by election-denying candidates and Trump’s continued lies that the 2020 election was stolen. He has at times controversially framed this moment in American history as a battle between those who want a robust, civil debate about the best path forward and those willing to scorch Democratic traditions for political expediency. As the midterms neared, Biden warned voters of so-called “MAGA Republicans” whose fealty to Trump eclipsed any impulse to act for the common good.

Voters resoundingly rejected far-right candidates in November’s midterm elections who deny the 2020 election results and have shown sympathy toward Jan. 6 protesters. At the state level, voters elevated Democrats over Trump-backed candidates for Senate and governor.

“While some courageous men and women in the Republican Party are standing against it, trying to uphold the principles of that party, too many others are transforming that party into something else,” Biden said while commemorating the first anniversary of the Charlottesville riot. “They seem no longer to want to be the party — the party of Lincoln, Eisenhower, Reagan, the Bushes. But whatever my other disagreements are with Republicans who support the rule of law and not the rule of a single man, I will always seek to work together with them to find shared solutions where possible.”

Trump has announced he is seeking the presidency a third time and continues to baselessly insist the election was rigged.

A congressional committee that spent 18 months investigating the attack found Trump’s conduct following the 2020 election was to blame and recommended that he be barred from holding office again.