These are the climate numbers to watch in 2023 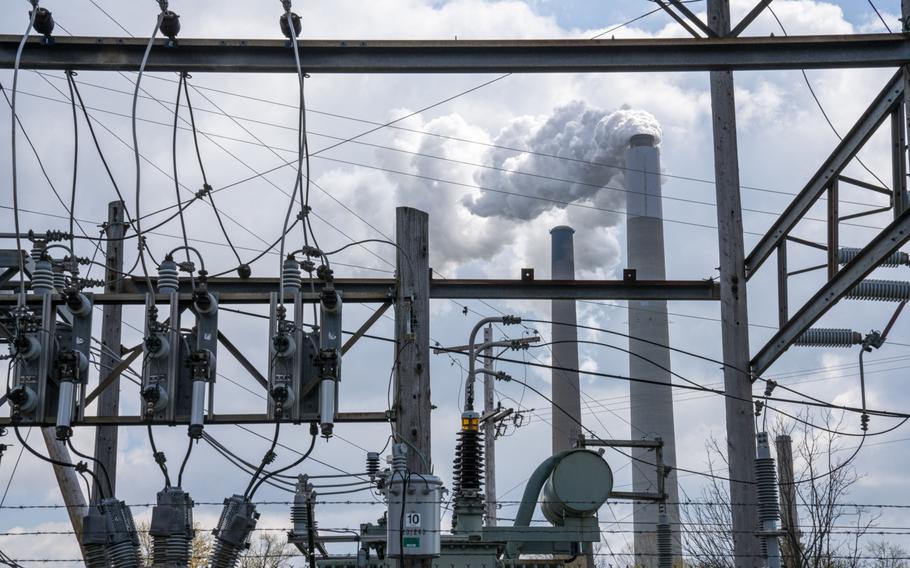 Emissions rise from a smoke stack, behind a substation at the Conesville Power Plant in Conesville, Ohio, on April 18, 2020. (Dane Rhys/Bloomberg)

The year 2022 saw the U.S. enact an unprecedented climate bill and countries take bold steps at two United Nations conferences to aid disaster-stricken developing nations and preserve what's left of the natural world. Investment in renewables grew and so did the popularity of electric cars and heat pumps. When it comes to the Earth's vital statistics, however, the outlook remains less promising.

In the next few weeks, major climate science research groups are expected to issue their conclusions about 2022's global average temperature — and it's likely to be hot. A first-draft estimate issued by the World Meteorological Organization in November predicted the year would rank as the fifth or sixth hottest on record, 1.15C above the 1850-1900 average. That would make the past eight years the hottest since global measurements began, according to the WMO's count.

If the first few days of 2023 are anything to go by, the warming trend looks set to continue. The year began with one of the most severe winter warm spells in European records, according to meteorologists. After the continent smashed summer heat records for the second consecutive year in 2022, new seasonal highs were registered in several European countries on New Year's Day.

Scientists say temperatures may breach the Paris Agreement's lower limit of 1.5C within a decade.

Driving temperatures upward are record emissions of planet-warming greenhouse gases. Emissions from the burning of fossil fuels and cement production rose an estimated 1% last year over 2021, to 36.6 gigatons of carbon dioxide. That's even higher than 2019, the year before the pandemic caused an unprecedented — but temporary — drop in emissions, according to the Global Carbon Project, an international scientific collaboration that makes the estimates every year.

Oil use led the 2022 increase, specifically for aviation, as international travel rebounded toward pre-pandemic rates. Both oil and coal finished the year in higher demand than in 2021. And Russia's invasion of Ukraine prompted an energy crisis in Europe that's seen countries resort to a dirtier fossil fuel — coal. The energy shock reverberated around the world, so even China raised coal production to help satisfy markets.

Climate scientists every year update the size of the "carbon budget," or the amount of CO₂ humanity can emit before letting go of even a 50-50 chance of keeping global warming below internationally agreed-upon targets. There's about nine years of emissions left at 2022 rates to have half a shot at the 1.5C goal and 30 years before chances of meeting the higher-end 2C limit diminish. For the world to reach net-zero emissions by 2050, countries would have to cut emissions every year at a rate "comparable to the decrease observed in 2020 during the COVID-19 pandemic," according to the Global Carbon Project.

Investment in renewables is expected to keep growing, but it's not clear when that expansion will translate into a decline in global greenhouse gas emissions. BloombergNEF projects that 2023 will bring an 18% growth in carbon-free energy. That should add up to more than 500 gigawatts of wind, solar, electricity storage, nuclear and geothermal power in 2023, but clean electricity additions reach 1.4 terawatts per year by 2030 to get on track for a net-zero pathway.

At least 18 countries have seen emissions decrease for more than a decade, according to the most recent review by the U.N. Intergovernmental Panel on Climate Change. As global numbers blur into regional and national tallies, however, the picture becomes more complicated.

In November, the Climate Action Tracker, a research team that compares countries' emissions rates to both their own and global goals, found that while there had been almost no progress since the U.N. climate conference in Glasgow in 2021, there was phenomenal and under-acknowledged progress in the international climate diplomacy system since 2009.

"If you look at the system as a whole — the conferences since 2009 until now — they have definitely achieved something," Niklas Höhne, a climate policy scientist at Germany's New Climate Institute who contributes to Climate Action Tracker, said at the time. "Now we are in a different world."

The question is, when will that diplomacy translate into more positive readings for the planet's vital statistics?

Included in the Climate Action Tracker summary is a four-page catalogue of 39 countries' current climate policies, each nation denoted by a flag icon. Argentina is expediting a new gas pipeline and exploring offshore oil. Canada has a new climate plan but is nonetheless moving along "like it's a pleasant Sunday afternoon and not a climate crisis." Iran hasn't ratified the Paris Agreement. The U.K., a global green leader, was called out for policies that cover only 40% of relevant emissions and "highly insufficient" climate finance.