(Tribune News Service) — A monstrous once-in-a-decade winter storm is battering a huge swath of the central United States with snow and frigid temperatures, making a mess of highways and canceling thousands of flights as the holiday travel season peaks.

Blinding snow squalls and dangerous cold have gripped the region as an estimated 112.7 million people are set to travel at least 50 miles from home through Jan. 2, according to AAA. The storm and deep freeze even triggered warnings from the White House.

“This is not like a snow day, you know, when you’re a kid. This is serious stuff,” President Joe Biden said in a Thursday briefing, calling it “dangerous” and threatening. “If you all have travel plans, leave now. Not a joke.”

More than 3,600 flights through Saturday have been scrubbed around the U.S. already, with the majority of Thursday’s cancellations in Chicago and Denver, according to airline tracking service FlightAware. As the storm moves east, travel disruptions are set to strike New York’s LaGuardia Airport, where 191 Friday flights have already been scrapped. Several airlines have waived fees for those looking to rebook.

Amtrak also canceled some trains in the Midwest and northern New England.

The arctic front, expected to continue for the rest of the week, is perhaps most remarkable for its sheer size. Snow, blizzard, freezes and flood warnings and advisories stretch from Washington state to Maine and down to the Gulf of Mexico. Frigid temperatures reach as far south as Texas, with Dallas forecast to drop to 10 degrees Fahrenheit on Thursday night.

“It is a really impressive system,” said Ashton Robinson Cook, a forecaster at the U.S. Weather Prediction Center. “It is something that happens only every one or two decades.” 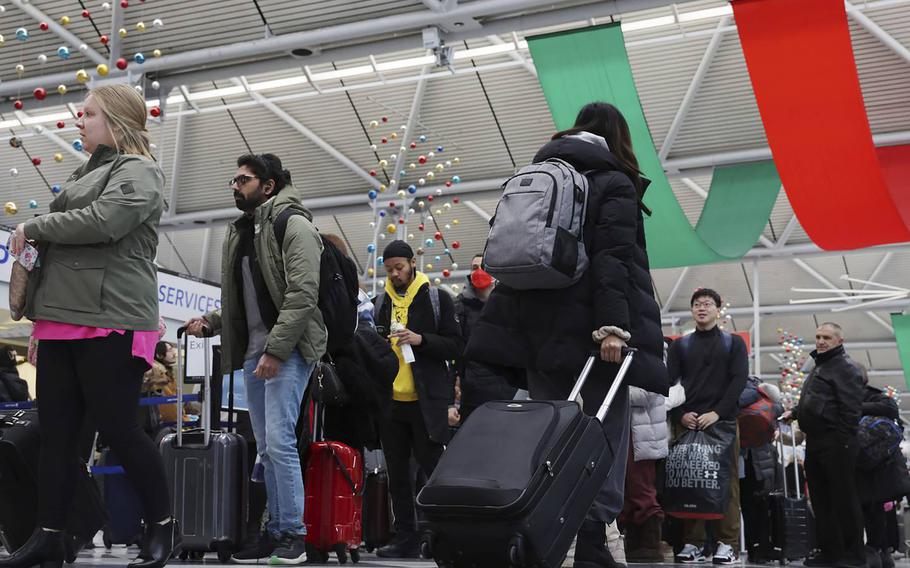 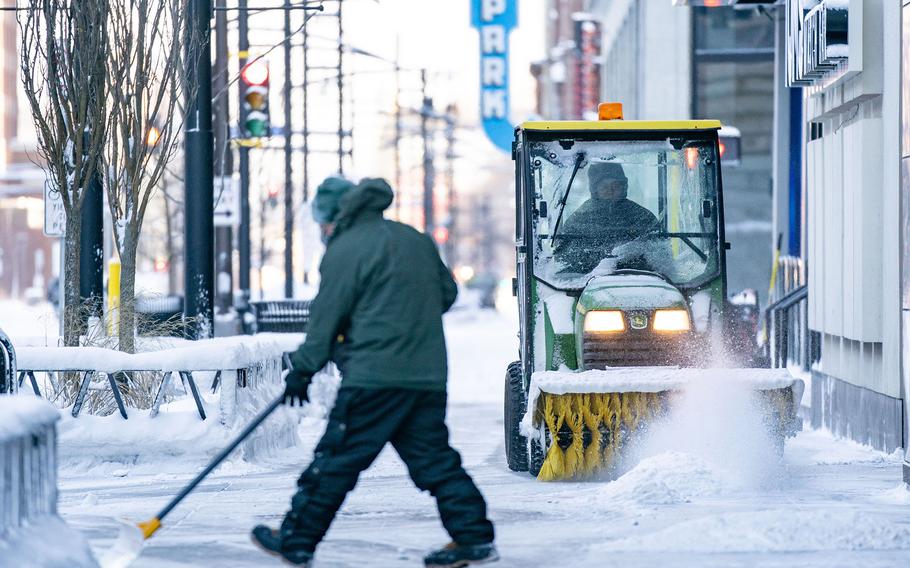 A man shovels the sidewalk while another one clears the snow with a power sweeper Thursday, Dec. 22, 2022, in downtown Minneapolis. (Alex Kormann/TNS) Charles Zajicek uses a power sweeper to clear snow off the sidewalk Thursday, Dec. 22, 2022, in downtown Minneapolis. The Twin Cities saw 8 inches of snow Wednesday followed by wind gusts up to 50mph and windchills reaching -35 degrees F on Thursday and Friday. (Alex Kormann/TNS)

Chicago’s Thursday night low is forecast to be -6 degrees F, with up to 7 inches of snowfall driven by wind gusts of up to 45 miles per hour, cutting visibility. Buffalo could get up to 3 feet of snow. New York will mainly see rain starting later Thursday, though Friday night readings in Central Park will drop to 15 degrees F.

Extreme cold warnings also cover western Canada, according to Environment and Climate Change Canada. Across the country, winter storm warnings spread across Ontario, Quebec and the Maritime provinces. In Toronto, the country’s most populous city, forecasters are warning of a flash freeze, high winds and up to 6 inches of snow by Saturday morning.

Thursday’s lowest recorded temperature in the 48 contiguous U.S. states was -50 degrees F in Montana, while Canada’s coldest was about -64 degrees F in Rabbit Kettle, Northwest Territories.

While New York and other East Coast cities won’t have to contend with snow, high winds coupled with a new moon — which affects tides — raises the risk of coastal flooding from Chesapeake Bay to the Gulf of Maine.

Breakers as high as 15 feet could crash into the Long Island shoreline, and tides could rise 3 feet above normal high marks, the weather service said. People in flood-prone areas should hurry to protect their lives and property.

Wind advisories and warnings stretch from northern New Jersey to northern Maine and there’s risk of moderate coastal flooding in Virginia and throughout New England.

The cold had pushed across the Plains into the Midwest and Texas and was likely to set nearly 80 records — mostly for low daily maximum temperatures — across the country, according to Marc Chenard, a senior branch forecaster at the Weather Prediction Center. Some places could see see windchill that make the cold feel like -65 degrees, which can kill exposed people and livestock.

Farmers are bracing for record cold that could cause machinery to break down, impact winter wheat growth and freeze livestock at a time of already historic food inflation.

In Texas, where the state’s electric grid was battered by cold early last year, the chill should peak from late Thursday to Saturday and start to moderate early next week, Chenard said. The snow from the storm won’t be that extreme for many places, though high winds will be a problem, he said.

(Christine Buurma contributed to this story.)