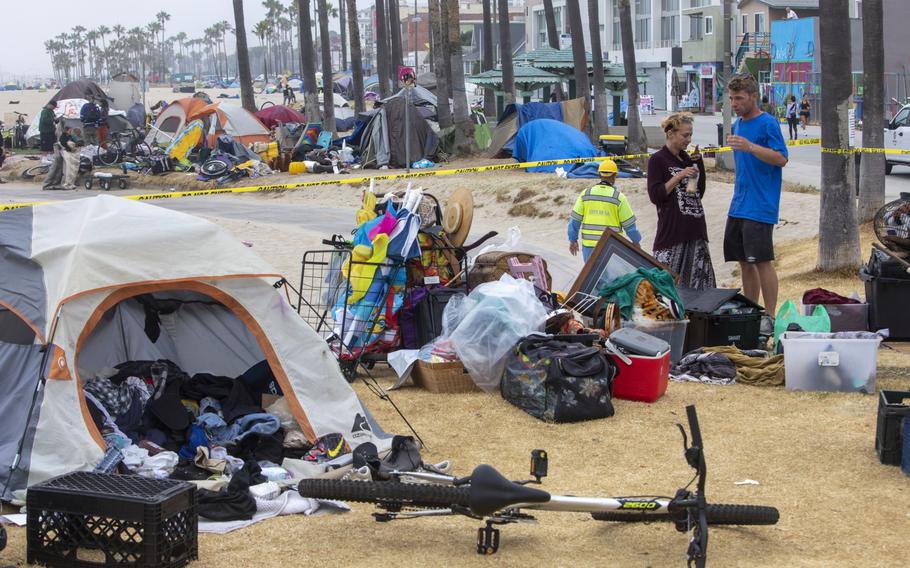 President Joe Biden released a plan Monday that aims to reduce homelessness in the United States by 25% in the next two years.

The 100-plus-page plan, which officials said includes input from communities around the country and feedback from hundreds of unhoused people, comes as homelessness in the nation reaches crisis levels. New York's mayor last week announced plans to force unhoused mentally ill people into treatment, while the mayor of Los Angeles has declared a state of emergency.

Released through the U.S. Interagency Council on Homelessness, the plan details that homelessness is rising after "steady declines" from 2010 to 2016. More than 1.2 million people experienced "sheltered homelessness" in 2020, the most recent year data was available.

By another measure, more than 580,000 people were homeless on a single night in January 2022, when the Department of Housing and Urban Development performed its annual "point-in-time count" — a method some advocates say underrepresents the number of unhoused people. In addition, according to the plan, more homeless people were unsheltered than sheltered for the first time since data collection began.

The plan set out how the Biden administration would combat homelessness by, among other measures, battling racial inequity, encouraging the construction of affordable housing, facilitating communication between federal and local governments, and preventing homelessness in the first place.

In a statement included in the plan, Biden said it "will put us on the path to meeting my long-term vision of preventing and ending homelessness in America."

"Every American deserves a safe and reliable place to call home," he said in the statement. "It's a matter of security, stability, and well-being. It is also a matter of basic dignity and who we are as a Nation."

The plan said homeless people are wrongly blamed for their situation. Instead, systematic failures — including economic inequality and racial discrimination — have created a country where "in no state can a person working full-time at the federal minimum wage afford a two-bedroom apartment at the fair market rent."

"Homelessness is largely the result of failed policies," the plan said. "Severely underfunded programs and inequitable access to quality education, health care (including treatment for mental health conditions and/or substance use disorders), and economic opportunity have led to an inadequate safety net."

The plan offered a sweeping, if sometimes vague, path to creating that safety net. The administration committed itself to "Housing First" — the idea that people should be housed before underlying problems such as addiction or mental illness are addressed.

"The fundamental solution to homelessness is housing," it said. "When a person is housed, they have a platform to address all their needs, no matter how complex."

The plan also criticized the "criminalization" of homelessness that has resulted in the arrests of unhoused people or the removal of encampments.

"[S]ome have resorted to clearing encampments without providing alternative housing options for the people living in them," it said. "Unless encampment closures are conducted in a coordinated, humane, and solutions-oriented way that makes housing and supports adequately available, these 'out of sight, out of mind' policies can … set people back in their pathway to housing."

In an interview, Jeff Olivet, executive director of the Interagency Council, said hundreds of thousands of people escape homelessness each year — but a higher number become unhoused.

"If we don't implement strategies that stem that inflow, we can't bail out the bathtub fast enough," he said.

A focus on prevention and racial equity is key, according to Olivet. Communities of color are harder hit by homelessness in what has become "a life-or-death public health crisis," he said.

"I know there will be pushback, particularly on any conversation about race or structural racism," he said. "Pretending it doesn't exist doesn't make it so."

Steve Berg, chief policy officer for the National Alliance to End Homelessness, said in an interview that the plan offered "an overall approach to the problem."

"There's a lot of specificity that's missing," he said. "Who is exactly going to do what to make this happen? That is not the role of this particular document."

Berg said targeted efforts to fight homelessness among particular groups, particularly juveniles and veterans, had shown success, while, for example, homelessness among people with disabilities remained persistent. He welcomed the administration's decision to distill "best practices" into the plan, but thought it was too soon to judge whether the Biden team would achieve its goal by 2025.

"I am completely convinced that it's possible," he said. "Whether it will succeed — it's sort of hard to tell."