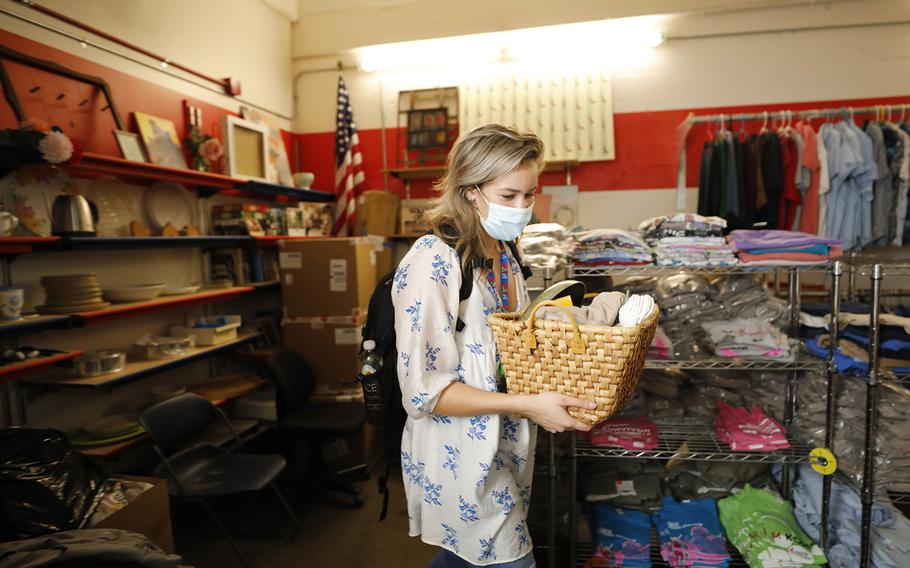 Hope Shaw, a Navy veteran and housing specialist for PATH (People Assisting The Homeless), collects items in the non-profits storage area to take to a client that was recently housed on Monday, Sept. 19, 2022, in San Diego, California. (K.C. Alfred/San Diego Union-Tribune)

SAN DIEGO (Tribune News Service) — In most cities, Jonathan Tisnado would be unlikely to secure a roof over his head.

The 30-year-old was diagnosed with stage 3 cancer in January 2020. Then, he lost his job, because he was too ill to go. Soon after, he lost his apartment, because he couldn’t pay rent. With nowhere to turn, he began living out of his car, a banged-up white Ford Focus.

He longed for a good night’s rest, something that’s hard to come by in such tight quarters. He made do by leaning down one of the seats in the front, or curling up in the backseat, but there was nowhere to stretch — his back would hurt, his legs would ache.

He reached out to a local nonprofit called PATH (People Assisting the Homeless) for help. But this July — 2 1/2 years, three surgeries and six months of chemotherapy after losing his apartment — he was still living out of his car.

That month, though, the San Diego Housing Commission approved Tisnado for an emergency housing voucher, and PATH assigned Hope Shaw, a housing specialist, to help him find a home.

Because San Diego has been unusually successful in getting emergency voucher recipients into homes, Tisnado suddenly had a chance.

The federal government unveiled the billion-dollar emergency housing voucher program last year to rapidly house the most vulnerable, marginalized people at the height of the pandemic.

Armed with $1.1 billion from the American Rescue Plan Act, HUD distributed 70,000 of these vouchers to cities and counties across the nation. The new program came with higher rent caps, extra money for landlord incentives and laxer documentation requirements than Section 8 vouchers, the longtime federal benefit that pays the majority of low-income tenants’ rent, but faces a myriad of problems.

The new vouchers still fell short against the realities of the nation’s massive housing crisis. Well over a year after they were doled out, just 52% of the new vouchers have been used across the country. In California, which has one of the worst housing crises in the nation, less than 45% of its emergency housing vouchers are in use. San Francisco has used less than 40% of its vouchers. Los Angeles trails behind with less than a fourth of its vouchers in use. Hundreds of Californians who could be housed under the program are still out on the street.

But as the Los Angeles Times reported in July, San Diego has dramatically outperformed its neighbors to the north. Despite San Diego’s tight housing market, 100% of its emergency housing vouchers issued since June 2021 have placed people into permanent housing.

Two factors may have helped San Diego succeed where other cities are struggling, housing advocates and experts across the country told The Times.

First, fewer people fall through the cracks in San Diego’s system. In other cities, applicants may shuffle among as many as four organizations. San Diego’s housing commission minimized the number of agencies and individuals whom clients have to deal with as they apply for vouchers, wait for approval, and — the hardest part — search for housing. In San Diego, most voucher applicants interact with at most two agencies before they are placed in a home.

Second, the city calculates how much vouchers are worth on a neighborhood-by-neighborhood basis, rather than using a flat rate across the city, making the vouchers much more flexible.

When Tisnado’s file landed on Hope Shaw’s desk, she set to work.

Shaw, fresh out of the Navy, wanted to help people. She didn’t realize how difficult the job would be. 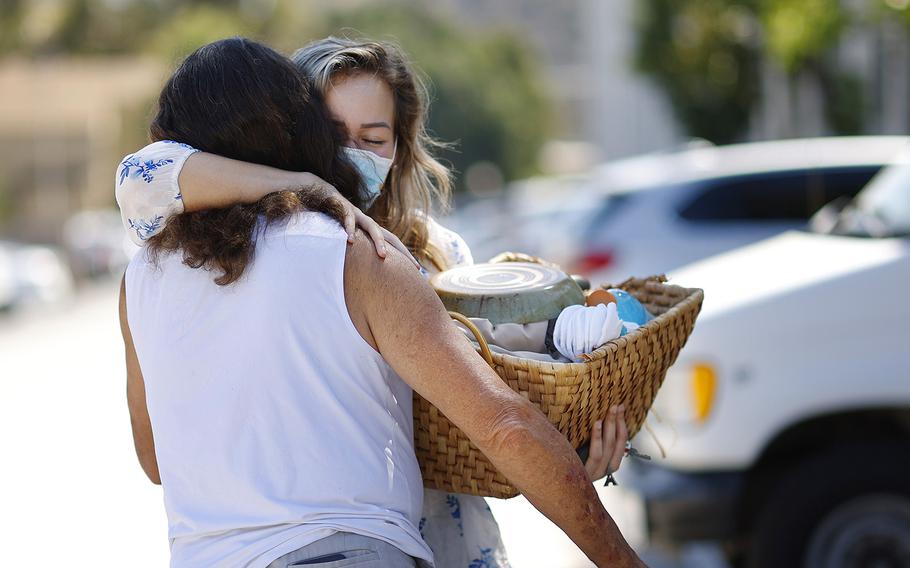 Hope Shaw, Navy veteran and housing specialist for PATH (People Assisting The Homeless), brings household items to Bruce Blackham who she recently found housing for on Monday, Sept. 19, 2022, in San Diego, California. An Emergency Housing Voucher funded by the American Rescue Plan Act was used to secure an apartment for him. (K.C. Alfred/San Diego Union-Tribune)

But the 25-year-old quickly settled into a routine. On any given week, she would spend as much as 20 hours searching for housing for her clients. She scrolled through online listings. She called landlords. Sometimes, she just hopped in her car and drove to apartment complexes. She knew that even with a voucher, her clients stood little chance of navigating the rental market on their own.

Like Tisnado, her first clients had worked with PATH for some time: They were struggling with homelessness and already in touch with the organization for assistance. When emergency housing vouchers became available, a PATH case manager helped clients apply. After the San Diego Housing Commission approved the application, the clients’ folders ended up at Shaw’s desk, and she started their housing search.

Eight of the 20 service providers that support San Diego’s emergency housing voucher program work like PATH does: They help clients apply for vouchers, wait for the commission to approve them, and then help their clients navigate the housing search.

But if a service provider doesn’t provide housing-search support, San Diego has a solution. Unlike Los Angeles and San Francisco, the city’s housing commission hired five full-time, in-house specialists to fill in the gaps.

With fewer entities to interact with, voucher recipients — already dealing with the burdens of houselessness — had a more streamlined experience in San Diego. In San Francisco, voucher recipients may have one organization refer them to the voucher program, while a second (the city’s housing agency) issues the voucher, a third provides case management and a fourth offers housing search support.

Shaw’s clients just had to rely on PATH.

After about a little over a month on the job, and determined to successfully house her first set of clients, Shaw received a tip from a city housing specialist about a newly renovated complex in Pacific Beach. The two-story, eggshell blue building sat in a quiet neighborhood with wide streets. A logo of a palm tree, the sun and the shore was stamped across its side.

The leasing agent may be looking for tenants and be worth talking to, her counterpart advised.

Shaw called the leasing agent, introduced herself and enumerated the positives of housing one of her clients with a voucher. Steady rent, a $500 incentive just for accepting a voucher holder, and a holding deposit from the housing agency are among the selling points — and crossed her fingers.

The leasing agent was happy to house her client.

Encouraged, Shaw got to work on filing her client’s paperwork. The rental market didn’t ease. But soon she learned how to navigate it and began housing client after client.

A few months later, on a sunny Tuesday, Shaw commanded a table at Panera in San Diego’s Mission Valley, laptop, planner and notebooks sprawled out on top of a wobbly white table.

A 65-year-old woman held an emergency housing voucher for National City, but Shaw thought it would be easier to find her housing with a voucher for the city of San Diego. She called the client — she tried three times before she got an answer — and, to Shaw’s relief, confirmed that the client was able to transfer her voucher.

San Diego takes a different approach. The federal Department of Housing and Urban Development designated San Diego and about two dozen other jurisdictions across the U.S. to adopt small-area fair market rents, which are calculated ZIP code by ZIP code within a city. This means that the amount a voucher can cover varies by neighborhood: The more expensive a neighborhood, the higher its fair market rent rate, the more the voucher is worth.

Focusing on neighborhood rents, rather than citywide ones, seems to make a difference. Most of the jurisdictions required to use small-area fair market rents have housed voucher recipients at rates above the national average.

Housing agencies elsewhere are allowed to opt in to using small area fair market rent, but many of the most pricey California cities, including Los Angeles and San Francisco, have not.

Shaw pulled up an Excel sheet she uses to track her clients’ voucher status, noted the woman’s newfound rent flexibility, and moved on to her next client: a man who liked a studio within his rent range, near the beach, available in December.

Shaw called the landlord to find out about applying on the client’s behalf, pumping her fist in the air when the landlord confirmed the unit’s availability and welcomed her to apply. But Shaw’s smile faded when the landlord mentioned that by December, rent would go up, just above the voucher’s cap.

Shaw recovered quickly, rattling off the benefits of having a tenant with an emergency housing voucher. She finished by pitching her chronically houseless client’s story: “This would be an opportunity to really help someone,” Shaw said. “I’m really trying to pull at your heart strings here.” The landlord just needed to maintain the current rent.

The landlord said she would think about it and discuss it with her team. Shaw made a note in her planner to check back in, added a note to her to-do list to apply to the unit regardless, and pulled up a tab on her laptop and began looking for new apartment listings for her client.

About a month after her first client moved into the eggshell blue Pacific Beach complex, she called the leasing agent again to find out how the tenancy was going. She asked whether there were any problems or concerns that she or the PATH team could help address. And she reminded the leasing agent to let her know about future availability in the complex.

A month later, the leasing agent called Shaw, asking if she had any more clients who needed housing. Soon, Shaw moved a second client with an emergency housing voucher into the Pacific Beach complex.

Afterward, she made sure to hop on the phone with the leasing agent for another series of thank-yous and reminders to stay in touch.

Within two weeks of launching his housing search, Shaw received another call from the Pacific Beach complex’s leasing agent. There was a unit open, and the leasing agent would be happy to have another voucher holder. Shaw submitted Tisnado’s documents as quickly as she could.

After two years of houselessness, sickness and uncertainty, Tisnado moved into his new studio in August.

The first thing he did was stretch out and lay down on the floor.