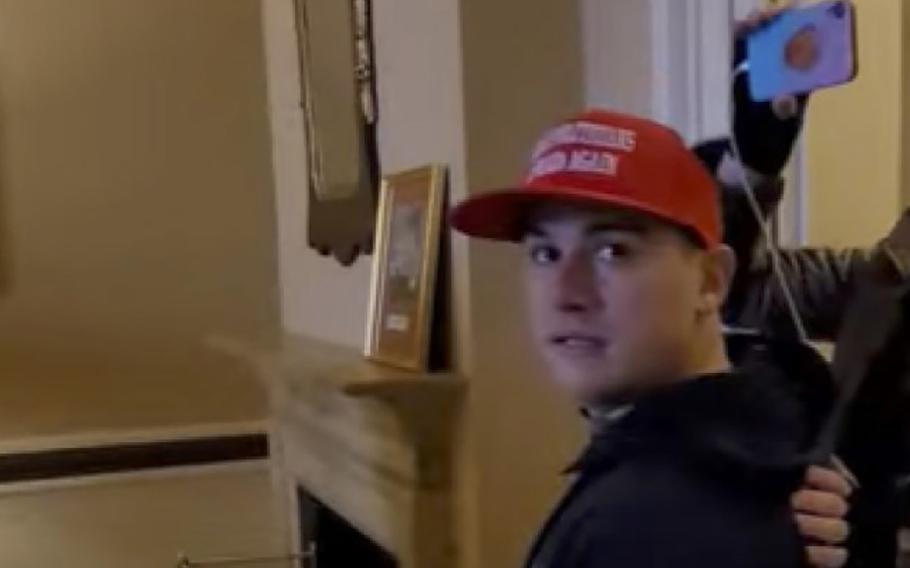 (Tribune News Service) — A Marine reservist from New Jersey who stormed the U.S. Capitol on Jan. 6, 2021, in a “Make Politicians Afraid Again” hat was sentenced to two weeks of intermittent incarceration Tuesday for his role in the riot.

Marcos Panayiotou, 30, of Wrightstown, told a federal judge in Washington, D.C., that he’d been swept up in the mob outside the building that day, which he described as “flowing through the doors like a wave of water.” He said he’d simply “followed the crowd.”

“I know it may sound tired and just trite, but I truly thought I was following the directives of President (Donald) Trump,” he wrote in a letter to the U.S. District Judge Dabney L. Freidrich. “Because of that, I truly understand the concept of herd mentality.”

Still, Panayiotou apologized and pleaded with Friedrich to let him off with just probation. Instead, she sentenced him to three years of court supervision, during which he’ll spend 14 days in jail and be required to pay $2,000 in restitution and fines.

Panayiotou first landed on the FBI’s radar after social media photos from the insurrection surfaced of a man wearing his distinctive hat and a black hoodie with the logo for the U.S. Marine’s 1st Maintenance Battalion based in Camp Pendleton, Calif.

Within days, a friend of Panayiotou’s wife named him as the man in the photo. Family members — including one who described him as patriotic but said he “does stupid things sometimes” — confirmed the identification, according to court filings.

Up until eight months before the Capitol attack, Panayiotou had been an active duty Marine stationed at Camp Pendleton and had only recently returned to New Jersey as a reservist.

He is one of 118 Capitol riot defendants with a background in military service, according to the George Washington University Program on Extremism. That means of the roughly 900 charged nationwide, nearly 13% of the defendants were veterans, reservists, active-duty service members, or members of a national guard at the time of the insurrection.

In Panayiotou’s case, prosecutors said his status made his actions on Jan. 6 all the more troubling. Assistant U.S. Attorney Maria Y. Fedor pushed Friedrich to incarcerate Panayiotou for 45 days.

“As a former military member, Panayiotou should have been well aware that a person does not have the right to enter restricted government buildings due to dissatisfaction in election results,” Fedor wrote in court filings in advance of Tuesday’s hearing. “His voluntary decision to storm a guarded government building is nothing short of shocking in light of his former military service and training.”

Despite his assertions of being swept up in the crowd that day, security footage showed Panayiotou as among the first to enter the building — climbing through a shattered window and while alarms were blaring — less than 10 minutes after the first breach.

He spent roughly 40 minutes inside, wandering from floor to floor, and even paused at a window at one point to — as prosecutors described it — beckon other rioters outside to join him.

When he was stopped on the building’s third floor by officers and ordered to leave the building, Panayiotou ignored them and wandered back through the Capitol Rotunda before eventually leaving on his own.

His defense lawyer, Carol Dominguez, explained his delay in departing Tuesday by saying that once inside the Capitol, Panayiotou “was struck with a sense of awe for (its) opulent history and beauty.”

Unlike other rioters who have been charged with destroying property or brawling with police, Dominguez noted, Panayiotou “touched no one and nothing.” And in the months since his arrest last year, he has pleaded guilty to one misdemeanor count of illegally demonstrating on Capitol grounds and has continued to struggle with his role on that day, she said.

He now works as an independent contractor for his father’s pool liner company and avoids all discussions about politics, which Panayiotou said Tuesday make him feel physically ill.

“He is embarrassed for himself, his wife, those family, friends and U.S. Marines brothers who he believes have lost faith in him,” said Dominguez. “Going forward, he is a changed person."