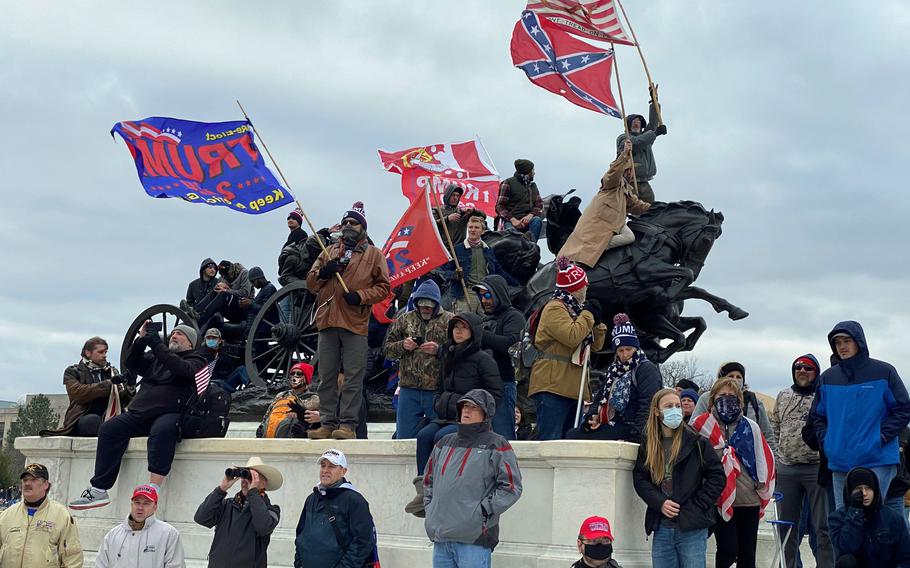 A man waving a Confederate flag and others watch rioters storm the Capitol in Washington, D.C., on Jan. 6, 2021. (Robert H. Reid/Stars and Stripes)

Twenty-one minutes after Mike Pence was evacuated from the Senate chamber on Jan. 6, an Air Force combat veteran named Larry Brock used a set of keys to try to open the door he had left through.

He did not succeed, and there is no evidence he knew how close he had come to the vice president. But Judge John D. Bates cited that moment in finding Brock guilty of six crimes related to his participation in the 2021 riot, including felony obstruction of Congress.

“Mr. Brock did more than just be present in the Capitol,” Bates said at the end of a three-day bench trial, calling it “unfathomable that Mr. Brock believed he was authorized” to be there. He “could look around and realize that he was part of a mob,” Bates said

Brock, a retired lieutenant colonel from Texas, identified himself after the riot to New Yorker magazine, which had captured footage of him wearing tactical gear and carrying plastic zip-tie handcuffs on the Senate floor. He told the New Yorker he found the cuffs on the floor; it is not clear where he got the keys he used to try to open the door off the Senate chamber.

Before Jan. 6, prosecutors noted, Brock made comments on Facebook, starting in November 2020, saying that “the battle isn’t winnable democratically” and that “fire and blood will be needed soon.” He said he bought a helmet and body armor “for the civil war that is coming.” He wrote five days before the riot that “the castle will be stormed.”

He also posted a proposed plan for taking over the government, including to “eliminate” the media.

“He was preparing for that assault as if it was a military operation,” Assistant U.S. Attorney Douglas Meisel said in his opening statement, “and viewing it through the lens of a highly trained, tactically proficient military officer.”

Defense attorney Charles Burnham argued that Brock was not trying to break the law and was unaware he was not allowed inside the Capitol building.

Burnham said in his opening argument that Brock watched President Donald Trump speak, along with “hundreds of thousands of other people,” and then entered the Capitol with “an almost orderly procession” of demonstrators. (Estimates generally put the size of the Capitol crowd in the tens of thousands.)

At that point, Burnham said, barricades surrounding the Capitol grounds had been torn down and the police “were off to the side, making no effort whatsoever to interfere with the movement of the crowd.” Capitol Police leaders have said that once they realized they could not stop the breach, they prioritized safety over the building’s security.

Prosecutors played numerous videos from inside the Capitol showing Brock in the vicinity of violence and property damage. He was in the building for over half an hour. On the Senate floor, Brock told another rioter not to sit in the vice president’s chair. Burnham argued that was a sign of Brock’s “moderating influence”; prosecutors said it showed he understood “better than anyone else” the process the mob had disrupted.

In the clip, Brock said they are in an “IO war,” an apparent reference to information operations.

Bates acknowledged that Brock at another point tried to stop other protesters from attacking police inside the building.

“But he didn’t leave,” Bates said.