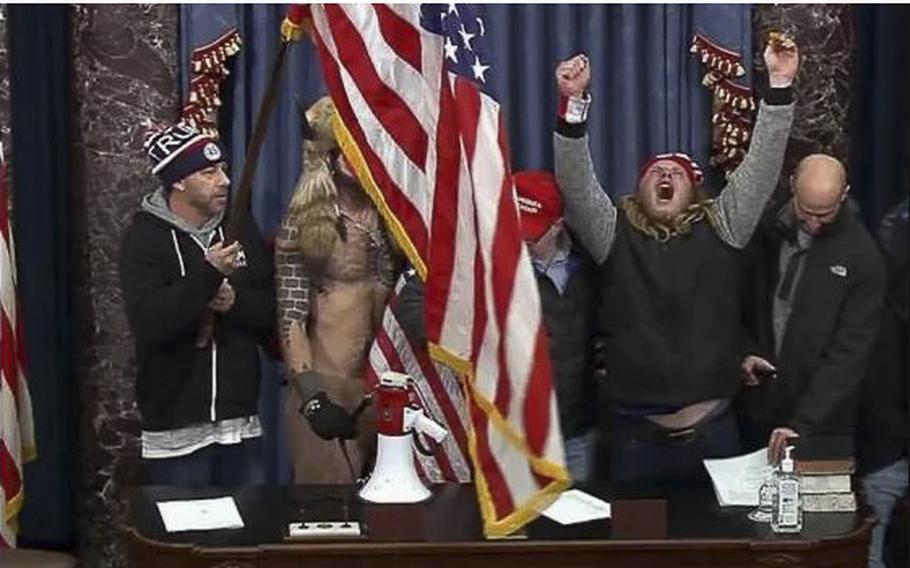 SACRAMENTO, Calif. (Tribune News Service) — Tommy Frederick Allan climbed up a rope hanging from the side of the U.S. Capitol on Jan. 6, 2021, then went through a fire door that had been broken open by rioters and made his way inside the building.

Once inside, he walked the hallways, stole an American flag, then climbed some stairs that led him to the Senate chambers, where he stood on the dais waving the stolen flag alongside Jacob Chansley, the so-called QAnon Shaman who was using a bullhorn to accuse members of Congress of being “traitors.”

Then, the 54-year-old Rocklin resident moved to a desk at the front of the Senate, where he snatched some paperwork left behind by Senate staffers who had fled the rioters, stuffed the documents into his pocket and took a cigar he found on a desk because, he explained later, he “figured I paid for” it.

This is how prosecutors describe Allan’s actions the day of the riot in Washington, D.C., and in court papers they are asking a federal judge to sentence him to two years following his guilty plea last August to obstruction of an official proceeding, a charge that could have netted him up to 20 years and a $250,000 fine.

“The nature and circumstances of Allan’s crime weigh heavily towards a term of incarceration,” Assistant U.S. Attorney Robert Juman wrote in a 40-page sentencing memorandum filed Wednesday in federal district court in Washington. “Unlike many other January 6th defendants, Allan did not just walk into the Capitol — he climbed a rope to get there, a stark demonstration that he was truly ‘storming’ the Capitol as he so eagerly anticipated.

Prosecutors also took pains to describe the very nature of the attack on the Capitol and its impact on the nation.

“The attack on the U.S. Capitol on January 6, 2021, is a criminal offense unparalleled in American history,” they wrote. “It represented a grave threat to our democratic norms; indeed, it was the one of the only times in our history when the building was literally occupied by hostile participants.

“By its very nature, the attack defies comparison to other events.”

Court papers include minute-by-minute recitations of Allan’s journey through the halls of the Capitol, as well as screen grabs from video surveillance showing him carrying his stolen flag, standing on the dais, checking his cellphone inside the parliamentarian’s office as rioters trashed it, and leaving the Capitol with one hand holding the stolen documents and the other patting Chansley on the back.

They also include social media posts, such as one Allan commented on that night when he wrote, “Best day ever.”

Facebook posts recovered by the FBI show Allan’s posts “were filled with claims that the 2020 election had been stolen and that violence was needed on January 6th to stop the transfer of power to President Biden,” court papers say.

On Dec. 21, 2020, Allan posted a comment asking “what good is a recall if they are using the same Dominion (vote) counting machines,” and urging that readers “stand and fight now or our country is Lost. Go to Washington DC January 6th,” court papers say.

On Dec. 20, he posted a message that he said “Hell no” to the thought of turning “our country over to the commies,” court papers say.

And on New Year’s Day he proclaimed that “the election was rigged” and that he would “do all in my power to prevent Fraudulent Beijing Biden and the CCP from taking over my country,” court papers say. “I’m not done fighting! On the contrary, I’m marching to the battlefield.”

Days earlier, Allan had posted that he was “coming from California with other Patriots hoping to hook up with the Proud Boys,” and on Jan. 5 he flew to Washington, where he attended then-President Donald Trump’s rally the next day and posted a photo of members of the Three Percenters anti-government group, court papers say.

“These are my people,” he wrote, according to court papers. “PATRIOTS.”

Allan recorded videos on his way, including one “of rioters using bike racks, intended as barriers, as make-shift ladders to climb over obstacles on the West Lawn,” court papers say.

“We’re storming the walls,” court papers say he announced, and ended up hauling himself up a rope over a wall of the building, a scene court documents memorialize with video screenshots of him doing so.

He continued recording and cheered rioters on as they broke windows at the Capitol.

“They’re kicking in the windows!” court papers quote him as saying. “They’re breaking the windows! We f*cking fought! You’re either with us or against us! Freedom or tyranny! Liberty or tyranny! Good or evil! That’s how I see it.”

Allan made his way inside the building at 2:45 p.m. and spent 30 minutes inside, stealing the flag, the documents and cigar, raising his fist “in celebration” and walking around the Senate floor waving the flag until law enforcement began to regain control and force the rioters from the floor, court papers say.

“Allan exited through the east door, still carrying the stolen papers and flag,” court papers say. “An officer took the flag back from Allan, and he was escorted to a nearby staircase and ordered by the officer to leave the building.

“Allan stopped along the way and had to be told again by another officer to leave the Capitol.”

Once outside, he raised the stolen documents up in front of the crowd and explained, “I was in the f------ halls of the Senate” and that he had taken the documents from the desk of Senate Minority Leader Mitch McConnell, R-Ky., court papers say.

“He held up another document, apparently signed by the former president, saying ‘Here’s a Trump f------ letter, right here. Trump signed it. I took this off f------ McConnell’s desk,” court papers say.

“When asked how he knew which desk was McConnell’s, Allan said, ‘Well, I went to the very top desk’ and asked the people around him to confirm that ‘McConnell’s the head of the Senate,’” court papers say. “Allan then pointed at the Capitol and said ‘I came from California to do this. ... Storming the m----------- building.”

Allan returned to California the next day and, apparently, reconsidered some of his actions, burning the documents in his backyard and deleting his Facebook account, court papers say.

When the FBI showed up at his home Jan. 15 after receiving a tip about his posts, “Allan asked to speak to a lawyer and terminated the meeting,” court papers say.

“Records from T-Mobile show that the next day, January 16, 2021, Allan deactivated his cellphone and switched to a new phone,” court papers say. “The original cellphone was not present when agents searched Allan’s house in connection with his arrest on January 22, 2021.”

In arguing for a two-year sentence, prosecutors note his actions inside the Capitol and point out that he was “clearly proud” of what he had done.

“He thought of the riot as the ‘best day ever’ and promised to participate in future violence,” prosecutors wrote. “And he was anxious to express his pride that it was Trump supporters, and not (Black Lives Matter) who had attacked the Capitol.”

“Moreover, while Allan was one of the first January 6th defendants to be arrested, he was not among the first to accept responsibility and plead guilty — his plea came approximately 20 months after his arrest,” prosecutors wrote. “And, unlike many defendants, Allan has never offered to speak with law enforcement officials about the events of January 6th.”

Chansley, in comparison, “did not destroy any evidence, and thus, unlike Allan, did not receive an enhancement for obstruction of justice,” prosecutors wrote. “Also unlike Allan, Chansley demonstrated extraordinary acceptance of responsibility by affirmatively contacting law enforcement officials and agreeing to speak with them almost immediately after the attack.”

The QAnon Shaman also was one of the first of approximately 900 defendants arrested in the Jan. 6 riot to plead guilty, prosecutors noted.

Allan’s case also differs from the only other Sacramento-area defendant to resolve their case to date. Valerie Elaine Ehrke of Arbuckle pleaded guilty to a single misdemeanor count in June 2021 and received probation rather than jail time.

Charges against two others — Sean McHugh of Auburn and Jorge Riley of Sacramento — are pending.