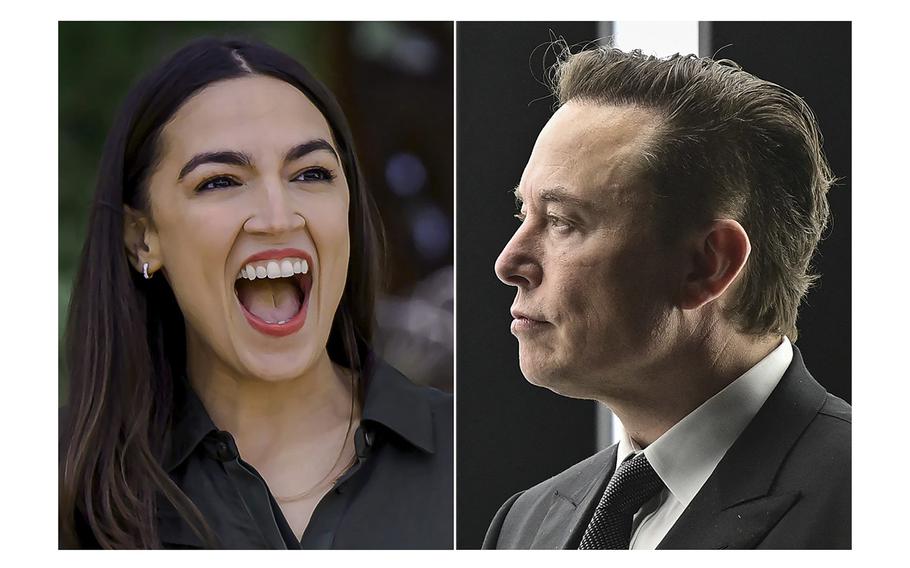 Rep. Alexandria Ocasio-Cortez and Elon Musk have been in a war of tweets since Musk took over Twitter. (TNS)

"Lmao at a billionaire earnestly trying to sell people on the idea that 'free speech' is actually a $8/mo subscription plan," the New York City Dem quipped on Tuesday night.

Musk directly responded to the tweet on Wednesday, writing, "Your feedback is appreciated, now pay $8." He even pinned the message.

Musk also posted a meme that said, "You can still use Twitter for free, just without the benefits."

He followed that up with a picture of a $58 sweatshirt on Ocasio-Cortez's campaign website.

Proud of this and always will be.

My workers are union, make a living wage, have full healthcare, and aren't subject to racist treatment in their workplaces. Items are made in USA.

Team AOC honors and respects working people. You should try it sometime instead of union-busting. https://t.co/TCOh3IHXlF

"Proud of this and always will be," she responded. "My workers are union, make a living wage, have full health care, and aren't subject to racist treatment in their workplaces. Items are made in USA. Team AOC honors and respects working people. You should try it sometime instead of union-busting."

The progressive superstar was taking a dig at Musk's strong opposition to unionization of auto maker Tesla, where he is CEO.

Ocasio-Cortez, whose personal Twitter account has 13.4 million followers, also capitalized on the promotion opportunity with a link to her merchandise.

Later Wednesday night, she tweeted, "One guy's business plan for a $44 billion over-leveraged purchase is apparently to run around and individually ask people for $8.

"Remember that next time you question yourself or your qualifications," the congresswoman added.

Musk's plan to charge for checkmarks launched a storm of complaints.

"F—k that, they should pay me," horror maestro Stephen King wrote Monday.

Musk has been on the defensive since then, tweeting on Tuesday: "To all complainers, please continue complaining, but it will cost $8"

The eccentric billionaire changed his Twitter bio to "Twitter Complaint Hotline Operator" from "Chief Twit," the nickname he chose after taking over the influential company last week.