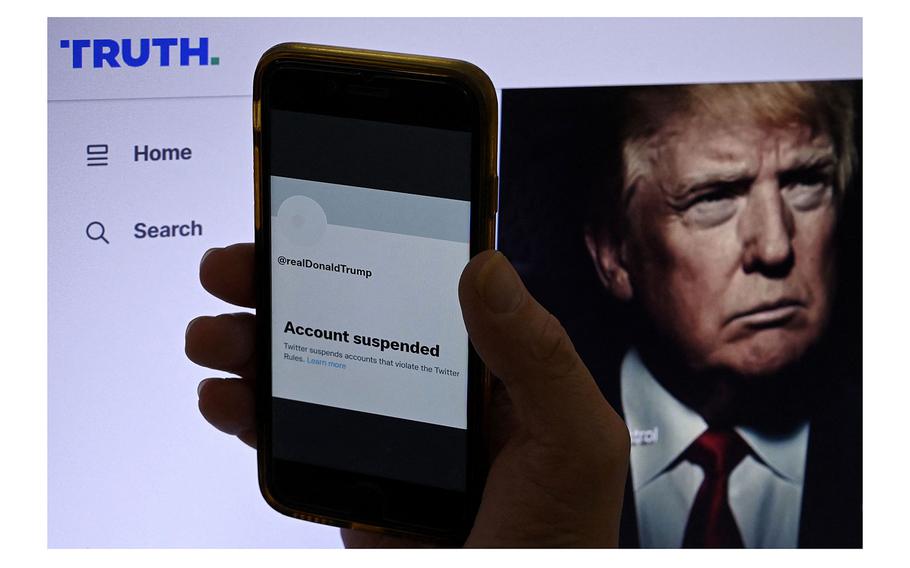 The suspended Twitter account of former President Donald Trump is displayed on a mobile phone with Trump’s Truth Social page shown in the background on Oct. 28, 2022, in Washington, DC. (Photo illustration by Olivier Douliery/AFP/Getty Images/TNS)

Twitter owner Elon Musk has addressed when banned users like former President Donald Trump will be welcomed back to the social media site.

"Twitter will not allow anyone who was de-platformed for violating Twitter rules back on the platform until we have a clear process to do so, which will take at least a few more weeks," he tweeted Wednesday.

Trump was blocked from using Twitter, the former president's favorite megaphone, amid fallout from the Jan. 6 attacks on the Capitol for violating the social network's policies. Twitter cited the "the risk of further incitement of violence" when it booted Trump on Jan. 8, 2021.

At the time, he had 88 million followers.

Earlier this week, Musk acknowledged just how many people were awaiting Trump's return, writing: "If I had a dollar for every time someone asked me if Trump is coming back on this platform, Twitter would be minting money!"

The SpaceX founder said in May that he would pave the way for Trump's return if he completed his plan to buy the company. And while the former president praised Musk's recent acquisition of the social media site — saying he was "very happy" that Twitter was in "sane hands" — he noted he had no plans to come back. Instead, Trump said he would remain on his own social media platform, Truth Social.

Since Musk officially gained control of Twitter last week, he's been flooded with questions about whether those booted from the site would be welcomed back with open arms. When he proposed to purchase the company in April, he vowed to emphasize free speech and scale back content moderation practices that have resulted in bans from the micro-blogging website. His initiative sparked concerns from some users — many of them fearing Musk's mission could trigger a flood of hate speech and misinformation on the platform.

In the month's since, the 51-year-old billionaire has attempted to soothe some with the promise of a "content moderation council." Musk noted the group would "include representatives with widely divergent views, which will certainly include the civil rights community and groups who face hate-fueled violence."

Musk's tweets came after a meeting Tuesday with several civil rights and activist groups, including Color of Change, Free Press, the NAACP and Anti-Defamation League.