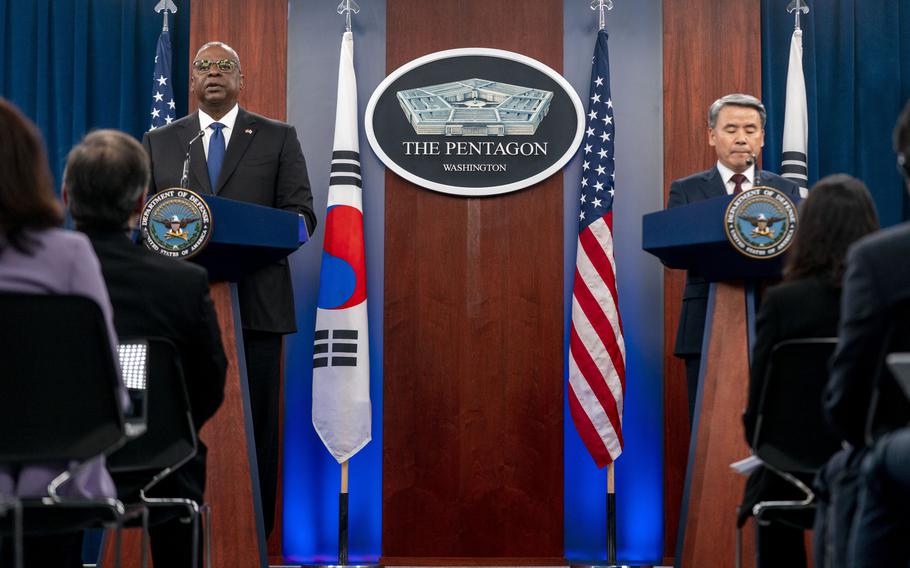 WASHINGTON — The United States and South Korea have agreed to strengthen their alliance and defenses and increase training after a flurry of new missile launches this week by North Korea, the military leaders of both countries said Thursday.

Defense Secretary Lloyd Austin and South Korean defense minister Lee Jong-Sup made the pledge during a meeting at the Pentagon and told reporters that they agreed to take other steps to bolster the security alliance, such as extending military exercises on the Korean Peninsula. Those air defense exercises, called “Vigilant Storm,” were supposed to end Friday but have been extended indefinitely, they said.

Both leaders also reaffirmed the commitment of the U.S. to deploy or enhance strategic assets to the Korean Peninsula in a timely and coordinated manner as necessary and identify new steps to reinforce deterrence in the face of North Korea’s attempts to destabilize the region, according to a joint communique released prior to a joint news conference Thursday at the Pentagon.

Austin and Lee said during the news conference that the U.S.-South Korean alliance is strong and warned North Korea against continuing its aggressive actions on the Peninsula.

“This [U.S.-South Korea] alliance has been an anchor of peace and security,” Austin said. “The United States remains fully committed to the defense of [South Korea] … and includes the full range of our nuclear, conventional and missile defense capabilities.”

“Any nuclear attack is unacceptable and would result in the end of the Kim regime,” Lee cautioned in his remarks at the Pentagon. “This is a strong warning against [North Korea].”

Lee’s visit was part of the 54th Security Consultative Meeting, which is an annual event during which U.S. and South Korean defense leaders gather and assess the overall security of U.S. and South Korean interests on the Korean Peninsula. The yearly event was discontinued under former President Donald Trump.

“The secretary and minister strongly condemned the DPRK’s escalatory activities and violations of United Nations Security Council resolutions, including ballistic missile test launches, multiple rocket launches, and firing of coastal artillery and called upon the international community to hold the DPRK responsible for its actions,” the communique states, referring to North Korea by initials for its formal name, the Democratic People’s Republic of Korea. South Korea calls itself the Republic of Korea, or ROK.

Missile tests are nothing new for North Korea. Officials and experts said they believe Pyongyang has test fired hundreds of missiles in recent years, partly out of a desire to showcase its military strength and caution adversaries against meddling in its affairs in the region.

The defense secretary said Kim Jong Un can choose one of two options – continuing on with his missile tests and nuclear proliferation or “choose denuclearization and a path toward a better future.”

“We talked about [North Korea’s] continued provocations and destabilizing actions,” Austin said. “And at this time of heightened tensions, our alliance is ironclad.”

Lee said Seoul’s relationship with Washington is vital to the country’s security on the Peninsula. U.S. forces defended South Korea from the North during the Korean War in the 1950s. That conflict ended with a peace treaty, but technically the war continues to go on.

“We have the ability to defend the Peninsula if called upon to do so,” he said.

The defense secretary stressed U.S. armed forces in the Pacific region are constantly on alert and would be ready to react to safeguard people and the interests of the U.S. and allies, such as South Korea.

“All of this activity is potentially destabilizing,” Austin said of the North Korean missile tests. “We are focused on making sure they don’t choose to employ nuclear weapons or choose to attack South Korea.”

Thursday’s meeting came a week after the Defense Department issued its first National Defense Strategy in four years and the first under Biden’s administration. That assessment repeatedly identified China as the top U.S. threat, but stressed North Korea is a “persistent threat” and a significant challenger to peace in the Pacific region.

“North Korea continues to expand its nuclear and missile capability to threaten the U.S. homeland, deployed U.S. forces, and [South Korea] and Japan, while seeking to drive wedges between the United States, [South Korea-] and United States-Japan alliances,” the strategy states.