Biden administration to refocus Afghan resettlement efforts in US 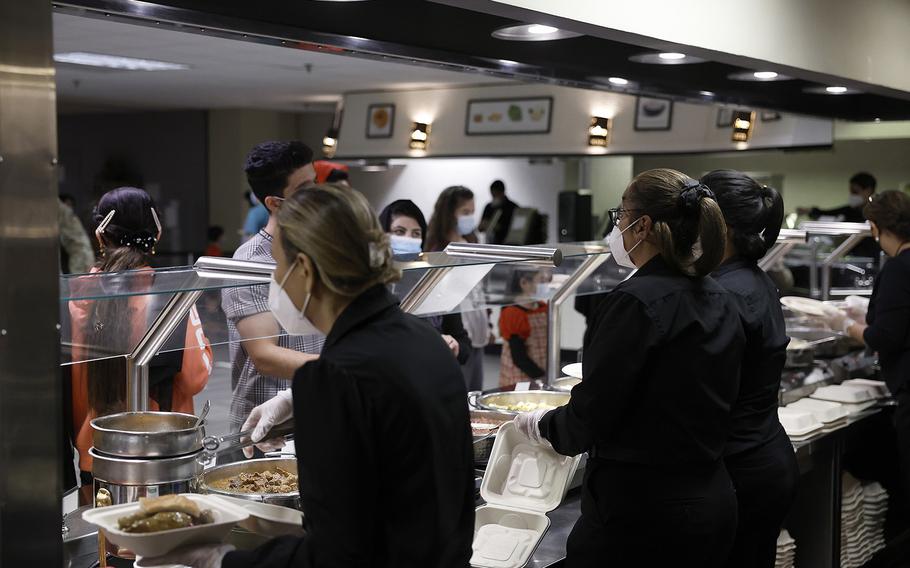 Kitchen staff serve food to Afghan nationals in the dining room of the National Conference Center, which in recent months has been redesigned to temporarily house Afghan nationals, on Aug. 11, 2022, in Leesburg, Virginia. (Anna Moneymaker/Getty Images/TNS)

Starting Oct. 1., the administration will resettle Afghans who fall into one of three categories: family members of U.S. citizens, lawful permanent residents and Afghans already brought to the United States; Afghans who are eligible for special immigrant visas; and Afghans who have received priority referrals to the U.S. Refugee Admissions Program.

The announcement of the new operation comes roughly a year after the government brought more than 80,000 Afghans to the U.S. under Operation Allies Welcome but left thousands more stranded overseas.

The administration hopes to double down on those existing immigration pathways, which lead to lawful permanent residency, as an alternative to humanitarian parole, which allows noncitizens to enter the United States temporarily without visas for pressing humanitarian reasons.

Most of the Afghans evacuated to the U.S. last year entered the country under humanitarian parole. However, lengthy backlogs in the SIV and asylum application processes have left many unsure if they can attain permanent protection through those pathways before their parole terms expire.

Last month, a bipartisan group of six senators introduced a new version of legislation to allow Afghan evacuees to adjust their status to lawful permanent residency. The proposal, known as the Afghan Adjustment Act, has been a focus of immigrant and veteran advocacy for months but faces an upward climb in the Senate.

Meanwhile, tens of thousands more Afghans who were not evacuated have applied for humanitarian parole from outside the U.S., but only a small minority have been approved.

"The President and this Administration have made clear that our commitment to our Afghan allies is enduring," a senior administration official said. "We are continuing to fulfill our special commitment to the brave Afghans who stood side-by-side with our diplomats, aid workers, and soldiers for two decades, and is working to reunify those in the United States with their family members overseas."

The Biden administration also stressed efforts to improve the SIV program, designed to help Afghans who directly assisted the U.S. mission in Afghanistan and qualify for safe haven in the United States. The program is beset by massive backlogs, with wait times that stretch far longer than the law creating the visa requires.

In July, the Biden administration announced an administrative change that would expedite SIV processing by removing a requirement to submit a form to U.S. Citizenship and Immigration Services, meaning that applicants need to deal only with the State Department.

"Resettling newcomers with a durable, long-term immigration status will facilitate their ability to more quickly settle in the United States and participate in their new communities," the official added.