Reflection for those evacuated a year after US withdrawal from Afghanistan 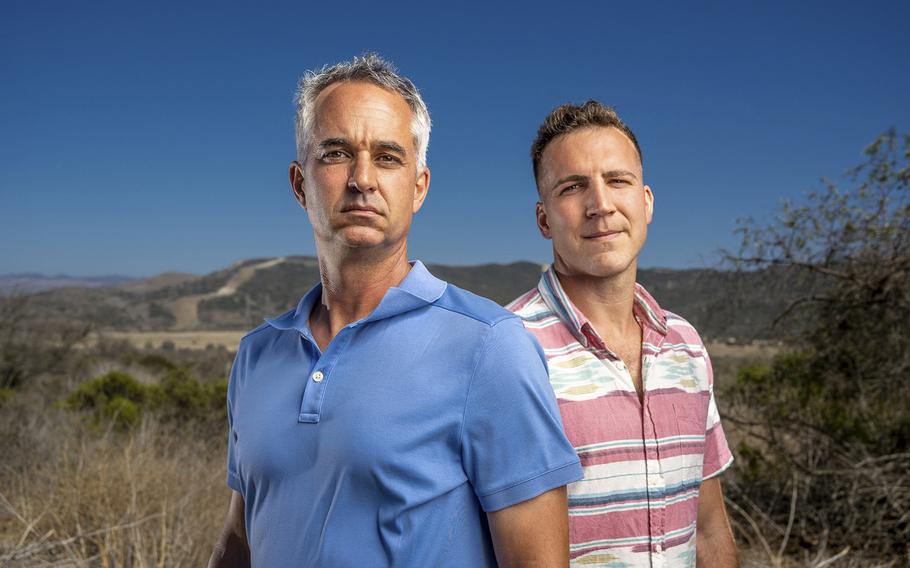 Retired Marine Lt. Col. Jamey Federico, left, and Marine Maj. Thomas Schueman are seen outside Camp Pendleton in San Clemente on Aug. 29, 2022. Both Marines went through extraordinary measures using their network of contacts to get their interpreters and their families out of Afghanistan. (Leonard Ortiz, Orange County Register/SCNG/TNS)

(Tribune News Service) — A year ago, Farkhunda “Wajmah” Koshani and Ziba Zahiri didn’t know if they would make it out of Kabul airport, where thousands of American civilians and Afghan allies were frantically fleeing the advance of Taliban forces.

Today they live days free of fear, enjoying American pastimes like picnics at the beach and trips to Disneyland.

Koshani, 22, was the new wife of Farid Zahiri, an Afghan who worked as a translator with the United States Marines; Ziba Zahiri, 64, is his mother. Just hours before a bomb blast at the airport killed 13 American service members and 170 Afghans, the two women, with help from retired Marine Lt. Col. Jamey Federico, a combat pilot and now Dana Point councilman, made it through the gates and onto one of the last planes as the U.S. finished its withdrawal from the county.

Not only were they alive, but within several months – after stopping off at camps in Qatar, Germany and at Marine Corps Base Quantico inVirginia – they made it to Orange County on Nov. 19, two months after escaping Kabul.

Many Afghan refugees and U.S. allies who fled before the withdrawal that wrapped up a year ago on Aug. 30, remain in camps around the Middle East with little hope of moving on and making it to another county. Even more remain in Afghanistan in hiding from the Taliban now in control.

As anniversary images of the final days of evacuations play on televisions, the two women say they feel both blessed and saddened. Blessed to be in the U.S., where they now live in a small Anaheim apartment, but saddened for those, including their own family, who might never be able to leave Afghanistan.

“I give it all to Jamey,” said Farid Zahiri, 31, who sits with his mother and wife. When Federico was an active-duty Marine, and on special assignment from 2012 to 2013 as an advisor to the Afghan Border Police Brigade commander, Zahiri was at his side night and day as an interpreter. “If it weren’t for him and all his connections, I would have had to wait three to four years to get them out. And, who knows what would have happened to them in Kabul?”

The women are working hard to assimilate to their new American life. Koshani is making inroads in her English as a Second Language online course at Santa Ana College. She’s just two classes away from graduating.

“I felt like nobody talked to each other,” Koshani said, with some translation help from her husband, of her first impressions trying to communicate with others in her new community. “Later, I realized it’s up to me if I want to start a conversation with someone. In our culture, everyone talks to each other.”

But thanks to her ESL professor, she’s learned ways to initiate conversations. And now, her husband makes sure that Koshani is the one to ask questions whenever they’re in a grocery store or at a medical appointment.

“Where’s the women’s stuff? “How much is the cost?” “Do you have the pink of this?” are some of her more-used phrases, she said. She hopes to move on to college and study information technology and then run her own business. The couple’s first baby is due in six months.

“It’s hard; you must watch for so many things,” Koshani said. “You have to control your car and your lane. Everything is going so fast.”

Ziba Zahiri, who raised Farid and four brothers single-handedly in Northern Afghanistan, said she is still overwhelmed that she’s in Orange County. Watching images of the mass chaos that ensued outside the Kabul airport a year ago makes her heart hurt, she said.

“I feel beyond grateful and happy,” she said. “I kept praying it would be like this.”

She spends her time watching YouTube videos to learn English, walking the neighborhood and meeting people from countries such as Jamaica and Mexico, and going to international bazaars in Los Angeles.

“Here, it is quiet and safe, and everything is perfect,” she said, smiling broadly. “I call it Flowerica (instead of America) because it’s so beautiful, like a flower.”

Zahiri also wants to drive and own a car. As a start, her son let her drive a boat during a recent visit to Big Bear Lake. Getting into nature has also helped with the transition, she said. Areas like Big Bear remind Zahiri of the green mountains of Northern Afghanistan, she said, where there are plenty of lakes and rivers and where she, her sons and Koshani grew up.

Getting to the U.S. was a total surprise for Zahiri. On the day of their escape, she accompanied Koshani to the airport to make sure she got through the dangerous streets — still wearing her pajamas with no identification. When a Marine officer asked if anyone else was evacuating, Zahiri said at first she hesitated but then realized she couldn’t send Koshani on her own. On the spot, she decided to go.

Once at the Marine base in Virginia, Zahiri said she first felt safe.

“We felt like we were at home there,” she said. “The colonel welcomed us and made me realize we were in good hands.”

Then they were on to LAX and soon back with Farid Zahiri.

A few days after watching the women reunite with Zahiri, Federico, with his wife, Alexis, also a former Marine pilot, found themselves putting on a wedding/welcome party at the Dana Point Community House. The event included about 200 from the Orange County Afghan community and dozens of Dana Point residents and groups who had learned of Federico’s efforts to help his former interpreter’s family.

“They were very generous with their gifts and donations,” Federico said of the community response that helped transform Zahiri’s apartment from a bachelor’s pad to a home.

“When you move to the U.S., it’s not an immediate remedy for all your troubles,” Federico said. “But the opportunity his children will have will be the best in the world. There is no equal, and that makes it all worthwhile.”

Since the withdrawal of its troops a year ago, the United States has welcomed home 94,000 Afghan nationals, American citizens and lawful permanent residents, according to a State Department official. Of that number, 85,000 are Afghan nationals, half of whom are eligible to apply for the Afghan Special Immigrant Visa program, which means they worked for the U.S. in some capacity or are family members of someone who did.

The State Department has worked to streamline the process by adding extra people to process the the influx of paperwork, issuing approximately 15,000 of the visas.

But, some interpreters who made it out of Afghanistan with help from the Marines they served with still find themselves in limbo now in the U.S.

Like Zahiri, Zainullah “Zak” Zaki got out of Afghanistan thanks to the dogged efforts of a Marine he served with, Maj. Thomas Schueman. But, he is among numerous Afghans still waiting to have their paperwork cleared.

Zak had translated for Schueman – recently stationed again at Camp Pendleton – and others with the 3rd Battalion, 5th Marines, a unit that encountered some of the fiercest fighting and heaviest losses in the Helmand province of Afghanistan.

Now in Texas, Zaki, 31, and his family wait pending approval of his visa – if it’s not granted, they face deportation.

Schueman and Zaki have partnered with now retired Lt. Col. Worth Parker, a Special Forces and Recon Marine who last year helped Schueman with Zaki’s evacuation, to write a book, “Always Faithful.”

Parker said the book is not only compelling in its tale of what Zaki endured and the commitment Schueman made to keep with what the government promised those who helped the U.S., but said Zaki’s story is symbolic of thousands more still in Afghanistan.

“Zak is not alone,” Parker said. “Tom and Zak’s story is important because they were so dedicated for so long. It’s what the U.S. Congress authorized, and the State Department was charged with making happen. They are an outstanding example of the connection the Afghans and Americans made over 20 years ago.”

Parker, after the withdrawal, worked with groups still assisting Afghans struggling to leave their county. A database of 60,000 allies still in need of help has been turned over to the State Department, he said. “It’s the State Department’s responsibility to act upon it.”

“My cousins have been killed, and I have a cousin currently hiding in a basement just to survive for the day, and my brother is constantly on the run,” Farid Zahiri said. “The same thing for Wajmah; some of her brothers were part of the intelligence of the former government. Now, they are some of the biggest targets for the Taliban.”

By 16, Zahiri was escorting U.S. forces from Kabul to different provinces. After becoming proficient and going through a series of background checks with the CIA, he spent five years with Marines on the ground.

He’s hoping now that some of those skills might be useful as he looks for a job as a policeman, a position that fits his talent and his heart’s desire to protect the country that saved him, he said.

Federico credits Zahiri with the success he’s already had, including becoming financially independent while taking care of everything his family needs.

“Becoming a police officer is Farid’s American dream,” Federico said. “He understands what it’s like to live without the rule of law. Any police department would be lucky to have him with his years of combat experience, empathy and knowledge of other cultures and languages. He’s got every character trait you’d need.”