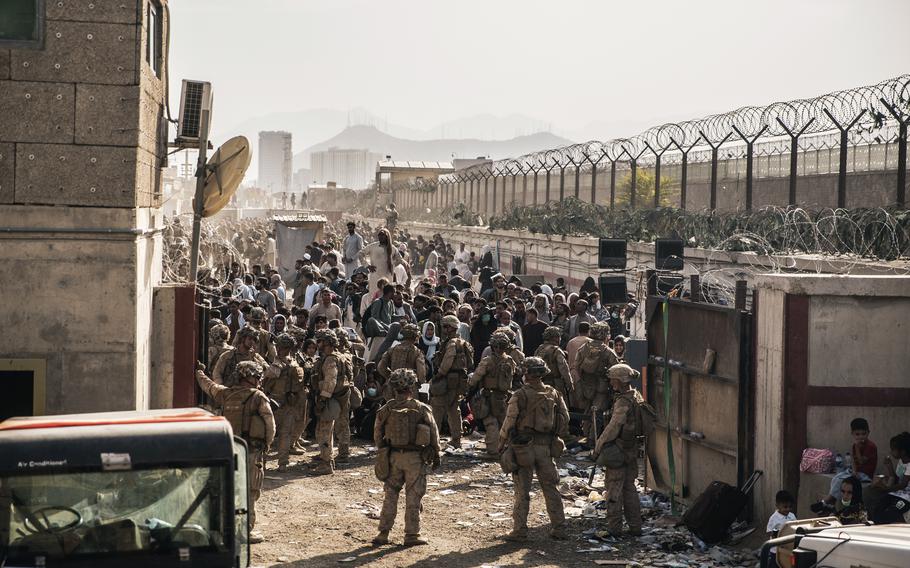 WASHINGTON — The Biden administration was at fault for the chaotic withdrawal of U.S. troops from Afghanistan last year that stranded Afghan allies and forced veterans groups to assist with a haphazard evacuation effort, according to a report published late Wednesday by House Republicans.

The report, produced by Republican members of the House Foreign Affairs Committee, accuses the White House and State Department of failing to plan for the Taliban’s swift takeover of the country, ignoring the recommendations of Pentagon officials who wanted to maintain a small force on the ground and botching a rushed evacuation.

The last American troops departed Afghanistan on Aug. 30, 2021, following a tumultuous mass airlift of nearly 130,000 U.S. citizens and Afghans vulnerable to retribution from the Taliban. Army Gen. Mark Milley, chairman of the Joint Chiefs of Staff, and other top military advisers told lawmakers last year that they would have preferred to maintain a U.S. force of 2,500 in the country.

“Following the evacuation debacle, the committee minority believes America’s standing in the world has been degraded, the U.S. is less safe than it was before, and those Afghans most at-risk of Taliban reprisals remain trapped in Afghanistan,” the report states.

Republicans said they interviewed people who were on the ground in Afghanistan’s capital city of Kabul, reviewed hundreds of situational reports and internal memos, and took fact-finding trips to Pakistan, the United Arab Emirates and Qatar to prepare their findings.

They said they were unable to complete a thorough investigation due to stonewalling from the State Department and named 34 current and former officials who are likely to be subpoenaed if Republicans win control of the House in the midterm elections in November.

Ned Price, the State Department’s spokesman, said Monday that Congress members and staff received more than 150 briefings on the withdrawal, the status of Afghan women and girls, relocation operations, counterterrorism, talks with the Taliban and other issues.

“We consistently stayed until we had exhausted all of their questions from both Republicans and Democrats on the committee,” he said.

Price said the report overlooked, ignored, misrepresented and got several facts wrong, namely that the administration of President Joe Biden could have reneged on the 2020 Doha peace agreement between the U.S. and the Taliban.

The report offers a detailed account of the end of a 20-year offensive in Afghanistan that killed 2,300 U.S. military personnel, wounded another 20,000 and cost almost $1 trillion, according to Defense Department estimates. More than 775,000 American troops served in the war.

The report also blames poor decision-making for the war’s last casualties, the 13 service members and 170 Afghans killed in a suicide bombing at Kabul’s airport during the last days of evacuation. Republicans contend those lives could have been spared if the U.S. agreed to manage security of Kabul as the Taliban had proposed. 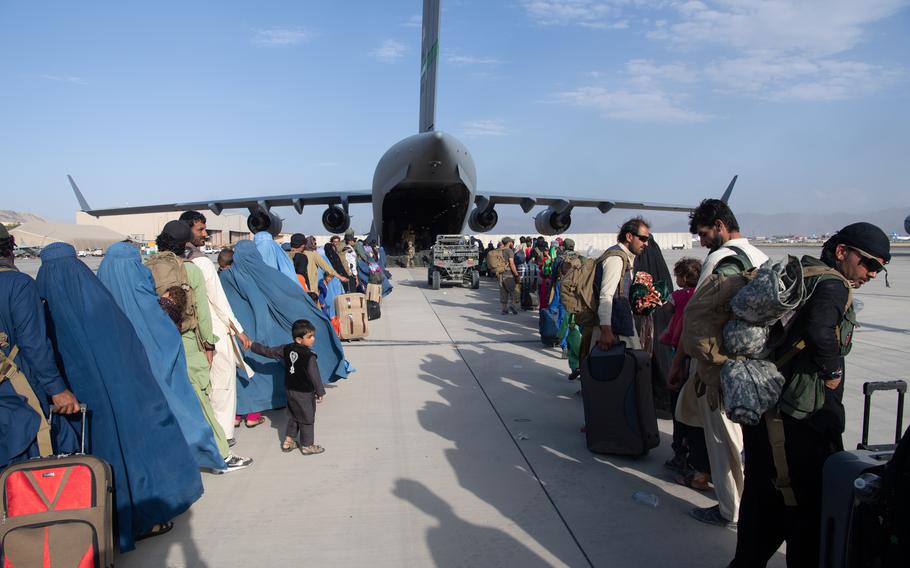 “The chaos at the gates and the Taliban’s inability to control the perimeter meant that U.S. military personnel were closely packed together as they sought to screen would-be evacuees, placing them in a more vulnerable situation that was exploited by the bomber, contributing to the high number of casualties,” the report states.

Marine Gen. Kenneth McKenzie, then-commander of U.S. Central Command, has repeatedly dismissed the Taliban’s offer as insincere and said the U.S. did not have the resources to undertake such a mission.

Securing the Kabul airport alone proved to be a struggle as thousands flocked to U.S. aircraft to escape the Taliban, some clinging to landing gear and falling to their deaths. Republicans criticized U.S. officials for urging desperate Afghans to make their way to the airport even though it was at full capacity and entry gates were closed.

The report states only 36 consular officers from the State Department were on the ground to screen more than 124,000 evacuees, amounting to “roughly one consular officer for every 3,444 evacuees.”

The slow processing led staffers and advisers for senior officials such as Vice President Kamala Harris, first lady Jill Biden, and an unnamed member of the Joint Chiefs of Staff to reach out to outside veterans groups for help, according to the report. Jake Sullivan, the national security adviser, and other officials directly contacted military officers in Kabul to request aid for specific at-risk Afghans, one military officer told Republican committee members.

“The fact that high-level members of the administration felt the need to go to a volunteer organization and tactical-level commanders on the ground as opposed to utilizing the State Department’s or other government entities’ formal internal processes and chains of command underscores how critical outside groups became to the evacuation effort, even with thousands of U.S. military personnel on the ground,” the report states.

Republicans said veterans groups and other volunteers developed their own procedures to speed up the evacuation, creating special signs with distinct symbols and phrases, code words and other visual signals to allow American service members to pluck select evacuees out of the teeming crowds. The evacuees largely consisted of personnel from elite Afghan military and intelligence units.

The volunteer groups also stepped in to clothe, feed and shelter tens of thousands of Afghans left behind. Many of the volunteers were veterans who drained their 401k retirement plans, quit or took leave from their jobs to fund the operation of a safe house network, according to the report.

Most of those who were able to leave Afghanistan were men. Kelley Currie, the former ambassador-at-large for the State Department's Office of Global Women's Issues, wrote in the report that only 25% of evacuees were women and girls. State Department officials have said it was more than 40%.

The State Department evacuated more than 800 American citizens from Afghanistan after the pullout of U.S. troops and continues to process immigration requests. As many as 160,000 Afghans and their family members are eligible to come to the U.S. through a Special Immigrant Visa, according to the State Department. Processing those applications could stretch well beyond the end of Biden's first term in January 2025.

Republicans said they are particularly concerned about a “significant” number of Afghan commandos and other special forces who remained behind and are in danger of being recruited by foreign adversaries. They charged the Biden administration has yet to put a plan in place to prioritize their evacuation and said some have crossed into Iran as a result.

House Republicans also took aim at the Biden administration’s “over the horizon” counterterrorism strategy, which relies on drones strikes and special forces operations. The report asserts Afghanistan has once again become a safe haven for terrorists and points to the killing in July of al-Qaida’s top leader, Ayman al-Zawahiri, in Kabul as proof.

Military officials, including Army Gen. Bryan Fenton, commander of Joint Special Operations Command, have defended the strategy to lawmakers. During his Senate confirmation hearing in July, Fenton said battling terrorism from afar is difficult but “absolutely doable” in Afghanistan.

However, a separate report issued Tuesday by the Defense Department’s Office of the Inspector General said the U.S. has been "significantly challenged" by the lack of a physical presence in the country as well as “scant intelligence and a lack of access to nearby military bases."

Republicans in their report chastised the Biden administration for failing to secure bases for intelligence, surveillance and reconnaissance operations in any of Afghanistan's neighboring countries.

The Defense Department inspector general reported the Taliban seized about $7.1 billion of military equipment that the U.S. left behind in Afghanistan, including $923.3 million in aircraft and about $4.1 billion in military vehicles. Some of the equipment had been made inoperable during the evacuation.

"The Afghan forces were heavily reliant on U.S. contractor support to maintain both their aircraft and vehicle fleets,” the report said. “Without this continued support, the long-term operability of these assets would be limited.”

The amount also included roughly $294.6 million in aircraft munitions and $511.8 million in weapons such as rifles, grenade launchers and howitzers, though it is unknown how many remain operational, according to the report.