Airman charged in April insider attack at US base in Syria 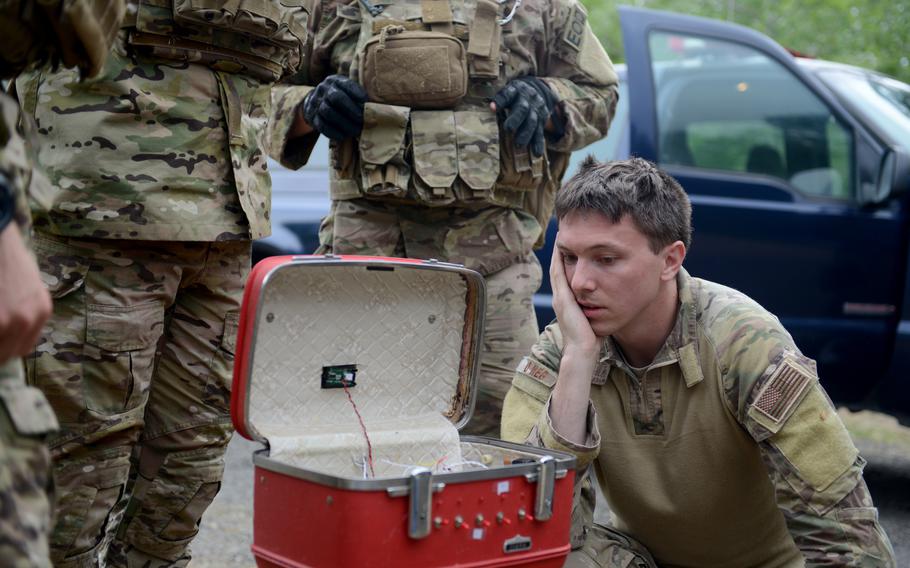 David Dezwaan, at the time an Air Force staff sergeant with the 60th Civil Engineer Squadron working as an explosive ordnance disposal technician, inspects the wiring of a simulated radioactive dispersal device during an exercise in May 2016 at Clear Lake, Calif. Dezwaan, now a technical sergeant with the 775th Civil Engineer Squadron, was charged Thursday, Aug. 4, 2022, with six crimes in connection to an explosives attack in April on a small U.S. military base in Syria that wounded four American service members, the Air Force said. (Bobby Cummings/U.S. Air Force)

WASHINGTON — An airman has been charged with six crimes in connection with an explosives attack in April that wounded four service members on a U.S. military base in Syria, the Air Force said Thursday.

The charges stem from an investigation into an April 7 bombing that took place at the base known as Green Village, which is east of the Euphrates River in Syria and adjacent to major oil fields.

Dezwaan was arrested June 16 when his commander made the decision to place him in pretrial confinement after reviewing the results of an investigation by the Army Criminal Investigation Division and the Air Force Office of Special Investigations, Stefanek said at the time.

Though indirect fire was initially blamed for the incident, investigators later found evidence that suggested someone had deliberately placed explosive material in an ammunition storage room and a shower area, according to an April 15 statement by Combined Joint Task Force — Operation Inherent Resolve.

Dezwaan’s preliminary hearing is scheduled for Aug. 23 at Hill Air Force Base in Utah, Stefanek said.

Several hundred U.S. and coalition forces are stationed at Green Village as they train local forces to fight remnants of the Islamic State terrorist group, according to the Pentagon.

Operation Inherent Resolve is a U.S.-led international coalition under U.S. Central Command that targets ISIS, primarily in Iraq and Syria.