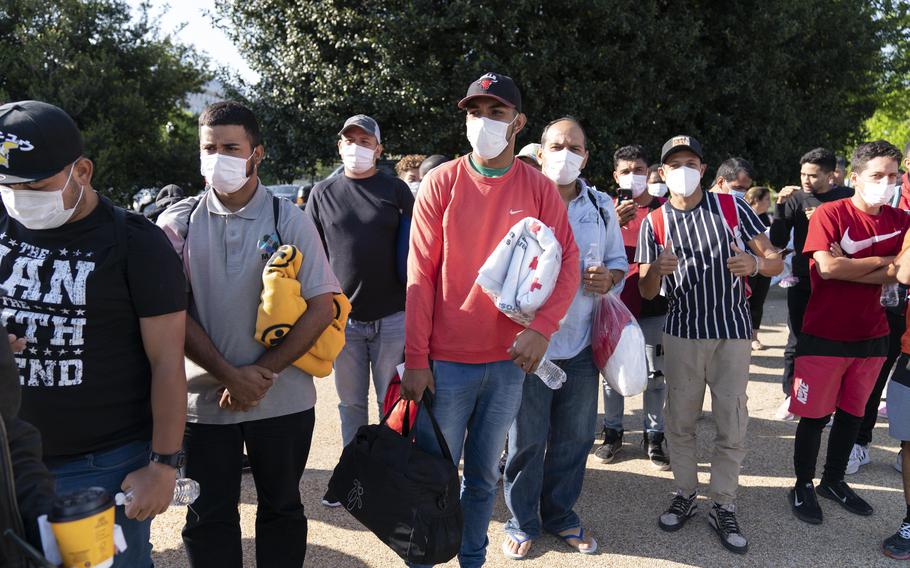 Migrants at Union Station near the U.S. Capitol in Washington hold Red Cross blankets after arriving April 27, 2022, on buses from Texas. D.C. Mayor Muriel Bowser said Thursday, July 28, 2022, that she has requested National Guard assistance to help stem a “growing humanitarian crisis” prompted by thousands of migrants that have been sent to Washington by Texas Gov. Greg Abbott. (Jose Luis Magana/AP)

WASHINGTON — D.C. Mayor Muriel Bowser has asked the Pentagon to activate the D.C. National Guard to help address a swelling number of migrants arriving in buses at the city’s Union Station, she told reporters Thursday.

“We need the federal government to be involved, so I've asked for the deployment of the Guard [for] as long as we need the Guard to deal with the humanitarian crisis that we expect to escalate,” Bowser said.

Texas Gov. Greg Abbott in April began chartering buses to send asylum-seeking migrants from his state to Washington, D.C. Since then, 6,100 migrants riding on 155 buses have traveled to Washington, according to his office. Most of the migrants are from countries in Central and South America.

To board a bus to D.C., migrants must volunteer for the trip and must have been processed and released from federal custody, according to Abbott’s office. He has blamed this and other measures he’s taken at the Texas border with Mexico on President Joe Biden.

“Washington, D.C., finally understands what Texans have been dealing with every single day, as our communities are overrun and overwhelmed by thousands of illegal immigrants thanks to President Biden’s open border policies,” said Renae Eze, a spokeswoman for Abbott. “If the mayor wants a solution to this crisis, she should call on President Biden to take immediate action to secure the border — something he has failed to do.”

Abbott has used the Texas National Guard to deter people in Mexico from entering his state illegally across the Rio Grande. Nearly 6,000 Texas troops are now deployed to the state’s southern border on a mission known as Operation Lone Star.

While the troops are not involved with the state’s busing operation, which the governor has raised more than $118,000 to fund privately, they do have the authority to detain anyone who is believed to have crossed into the U.S. illegally.

Bowser said she previously secured a $1 million grant to help set up “a respite center in a neighboring jurisdiction” and is now asking for the Defense Department to step up, as well.

“The number of people crossing the border seeking asylum we expect to only go up, and we need to ensure that there is a national response — not an ad hoc city-by-city, state-by-state response,” she said.

The mayor said the federal government has been able to help with Afghan and Ukrainian refugees with “a robust federal response that helps people with transportation on to their final destinations, [and a] legal route to work.”

“We need a parallel system for the increasing numbers of people that we will see crossing the border seeking asylum,” Bowser said.

The D.C. National Guard confirmed it had received a request from Bowser to activate but declined to say the purpose.