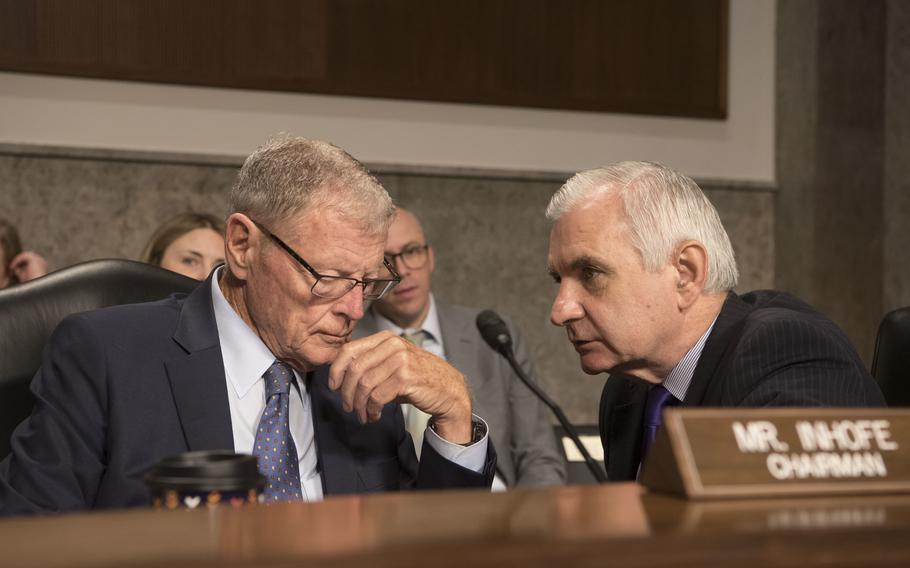 Senators and committee staff attributed more than half of the funding increase to historic inflation that has been teetering between 7% and 8%. The remainder of the increase accounts for additional funding for security aid to Ukraine, filling the Pentagon’s munition stocks, procuring equipment and initiating more military construction projects.

Congress last year exceeded the White House’s proposed budget by $25 billion, authorizing $768 billion to reflect an inflation rate of about 2%, said Oklahoma Sen. Jim Inhofe, the committee’s ranking Republican. The White House had requested $813 billion for defense spending next fiscal year, including $773 billion for the Pentagon.

“I’m very pleased because it’s actually … everything I hoped for,” Inhofe told reporters before the 23-3 vote on the measure. Inhofe and other Republicans had pressed for an overall increase of 3% to 5% above inflation.

Rep. Adam Smith, D-Wash., the chairman of the House Armed Services Committee, told reporters Wednesday that he also expects spending totals to increase in the House’s version of the 2023 National Defense Authorization Act.

“We’ll see by how much, but it’s not going to be an insignificant amount,” he said. “We’re going to wind up with an increased number.”

The House Armed Services Committee is scheduled next week to mark up its draft of the authorization bill, which sets policy and funding expectations for the Pentagon. Democrats on the House Appropriations Committee approved a $762 billion fiscal 2023 defense budget on Wednesday that is in line with the White House’s request. The full committee is set to vote on the bill next week.

So far, every draft of the 2023 defense legislation has included a 4.6% pay raise for service members despite lawmakers such as Rep. Jackie Speier, D-Calif., acknowledging last week that it “may not be enough” to offset a rising cost of living. The pay raise matches the White House’s proposal to give troops the largest wage hike in 20 years.

Sen. Jack Reed, D-R.I., chairman of the Armed Services committee, said Thursday that the panel was “very conscious and sensitive” to the issue but was adhering to metrics that tend to tie raises for service members to wage hikes for civilians across the federal government.

“We still have a long way to go before final passage,” Reed said of the potential to push pay higher.

Committee staff noted Thursday that provisions in the legislation would give the Defense Department greater financial leeway for bonuses and other incentives to help the military recruit and retain personnel. House lawmakers proposed last week that the Pentagon study how military pay tables are calculated to see if future adjustments are needed.

The legislation nearly triples authorized funding for the Ukraine Security Assistance Initiative, from the $300 million requested by the White House to $800 million, to help the embattled country defend itself against invading Russian forces. House appropriators stuck to the $300 million price tag for the program in their draft funding bill this week.

“Ukraine’s fight for freedom carries implications that will go beyond its borders,” Sen. Jeanne Shaheen, D-N.H., said in a statement. “Helping our partners defend their sovereignty and freedom is not only a moral responsibility, but a key U.S. national security priority to show Putin he cannot seize any nation he’d like or destabilize our world order. The military assistance provided in the fiscal year 2023 National Defense Authorization Act reaffirms that sentiment.”

Other Ukraine-related provisions in the bill seek to replenish weapons sent to the country, accelerate munitions production to keep the Pentagon’s inventories well-stocked and require the Defense Department to produce an assessment of force posture in Europe.

The legislation also heavily invests in technology and modernization efforts across the service branches and prevents the retirement of 12 of the 24 ships that the Navy had wanted to decommission. House lawmakers are aiming to save five ships from the chopping block.

Passage of the Senate panel’s bill marks the beginning of a monthslong process that will see the measure debated and voted on by the full Senate as a companion bill works its way through the House. Once both chambers pass their version of the legislation, lawmakers will draft a final version that will be passed by the Senate and House before being sent to the White House.