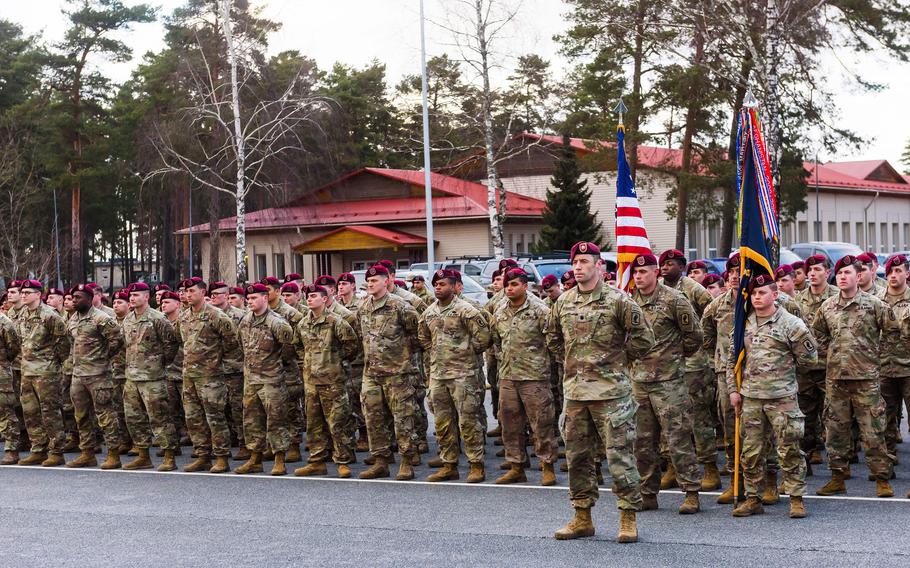 Soldiers of an airborne brigade of the U.S. Army stand at the Adazi Military Base of the Latvian armed forces in Adazi, Latvia, on Friday, Feb. 25, 2022, upon arrival for their mission to strengthen the NATO enhanced Forward Presence multinational battlegroup. (GINTS IVUSKANS/AFP)

The pay increase, the largest the military has seen in 20 years but well short of the current inflation rate, mirrors President Joe Biden’s fiscal 2023 budget request. But lawmakers, including House Armed Services ranking member Mike D. Rogers, R-Ala., have said the increase is inadequate given inflation, which is running above 8%, according to the Bureau of Labor Statistics.

A subcommittee aide told reporters that there is congressional interest in potentially raising the level of military pay further, but no proposals to do so have emerged so far.

The mark would also commission studies on the military’s basic housing allowance, a program that offsets the cost of private housing for troops, increasing the pay of military child care center employees and reimbursing moving expenses for military spouses who own home businesses.

“We used the Army’s number based on our understanding about their ability to meet requirements. We felt we would go with the number they had, but we’re going to be scrutinizing it because it’s such a big change. So that will be a concern for our oversight activities as we go on throughout the year,” the aide said.

Army officials have said the cut is needed to modernize the force, and the reduction in troops comes as the military services are increasingly struggling to recruit qualified servicemembers from a shrinking pool of eligible Americans. The subcommittee plans to mark up the bill on Wednesday.

On June 22, the full committee is scheduled to hold its marathon annual markup, which will wrap up all of its subcommittees’ marks into one measure, add the full committee’s changes and then report it to the House.

The Senate Armed Services Committee, meanwhile, plans to mark up its version of the bill next week.

The NDAA has become law for 61 years in a row.