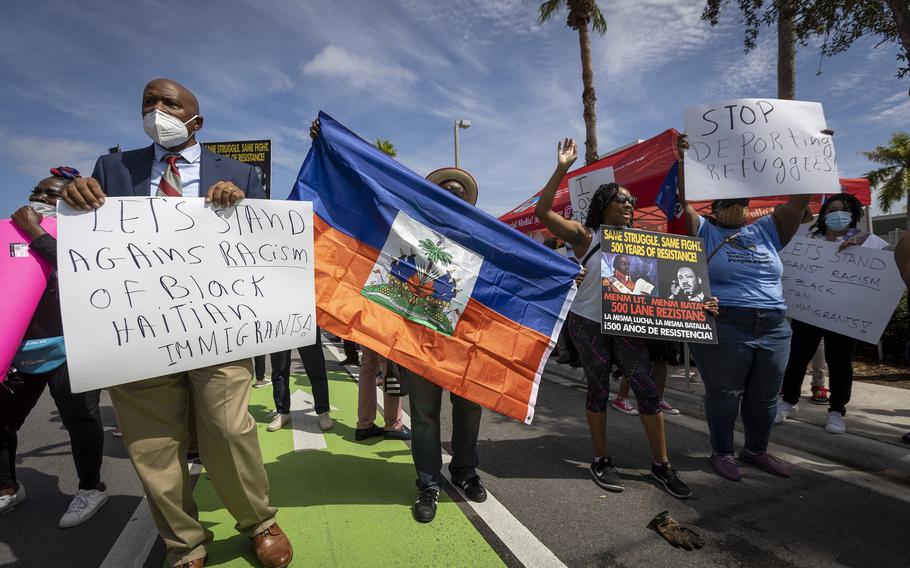 Protestors chant slogans in front of the USCIS district office in Miami as members of Miami’s Haitian community protest Sept. 22, 2021, against the Biden administration for their handling of Haitian immigrants at the U.S.-Mexico border. (Jose A. Iglesias, el Nuevo Herald/TNS)

(Tribune News Service) — A massive spending bill signed by President Biden on Tuesday to fund the federal government and provide $13.6 billion to address Russia’s invasion of Ukraine also includes language on accountability on Haiti and modification to U.S. policy toward the crisis-wracked Caribbean nation.

Tucked inside the omnibus spending bill’s 2,741-pages are reporting requirements for the State Department to brief congressional lawmakers on everything from Haiti’s ongoing governance crisis and individuals involved in acts of corruption to the events surrounding the 2018 massacre in Port-au-Prince’s La Saline neighborhood, to a status report on the ongoing investigation into the assassination of President Jovenel Moïse.

Lawmakers are not just seeking an update on where the U.S. investigation stands, but they want an assessment on Haiti’s ability to carry out its stalled inquiry into the July 7 killing and what assistance the Biden administration has provided to the country’s dysfunctional judiciary to help.

The push for accountability on Haiti was spearheaded by New York Democratic Congressman Hakeem Jeffries, and dates back to when Moïse was still alive and U.S. lawmakers in both chambers were urging the Biden administration to drop its support for Moïse and support a transition in Haiti. In addition, lawmakers are seeking “a significant policy review” of the U.S. policy to Haiti and a way to measure progress in addressing corruption, improved governance and advancement in the rule of law.

While some Haiti watchers hope the new language and requirements will produce new policy toward the country, others hope that at the very least the reporting will show the shortcomings of U.S. policy in the country.

Members of Haitian civil society, for example, had long complained about being dismissed by the U.S. embassy in Port-au-Prince and other State Department policy makers during their anti-government protests against Moïse and in discussions about the country’s future after his death.

Now lawmakers are mandating U.S. policy makers to provide updates on U.S. efforts “to consult and engage” with civil society groups, as well as Haitian government officials. They also want a description of the response by the government of Haiti to civic protests that have taken place since July 2018 and any allegations of human rights abuses, including attacks on journalists.

Congress is also giving the State Department no later than 180 days after Tuesday’s signing to provide an assessment of major corruption committed by members of the public and private sector in Haiti, including identification of any individual or entity that financed corrupt activities, and all corruption prosecutions investigated by the judiciary of Haiti since January 2015.

That includes an overview of efforts by the government of Haiti to address allegations that more than $2 billion from Venezuela’s PetroCaribe petroleum-import finance project were pilfered over eight years by several Haitian governments. According to damning investigations by Haiti’s Superior Court of Auditors and Administrative Disputes, which until now have received no traction from either the Haitian government or the international community, most of the petrodollars were spent in the decade following the devastating Jan. 12, 2010, earthquake. The court said the funds were wasted, embezzled and poorly managed as they were poured into hundreds of projects that did little to improve the lives of Haitians after the hemisphere’s worst natural disaster.

Known as the Haiti Development, Accountability, and Institutional Transparency Initiative Act, the Haiti language in the bill includes several modifications reflecting the current state the country finds itself in. In the time it has taken for the bill to make its way through committee before being passed as part of the omnibus spending bill, Haiti has slipped deeper into crisis.

The assassination of Moïse was followed by a deadly earthquake and powerful storm. And Haiti is seeing an increase in gang-related violence and kidnappings as well as a surge in maritime migration that has led to over 700 fleeing Haitians washing up on South Florida’s shores since November.

With no elected president or functioning parliament, the current interim government and members of civil society have been at loggerheads over the way forward, with U.S. lawmakers pushing for the Biden administration to support a plan by civil society over that of interim Prime Minister Ariel Henry, who wants to hold general elections later this year.

Henry’s critics in Congress contend that his government does not reflect a broad consensus and the Biden administration should instead support the civil society plan known as the Montana Accord. That plan proposes a two-year transition led by a five-member presidential college and a prime minister, whom accord supporters have already chosen.

While it sticks to the U.S. stance of not providing direct funding to Haiti’s government, the new policy does lay out under what conditions support to the central government of Haiti may be considered: After free and fair elections produce a new president and parliament, or if the country is being led by a transitional governing authority with broad representation of Haitian society.

The State Department, which has held several talks with Henry and civic leaders in recent weeks, has pushed back against critics who accuse it of supporting Henry over civil society.

“We know that the political situation in Haiti is at an impasse with de facto ruler Ariel Henry refusing to cooperate with the civil society-led process to a democratic transition,” said Rep. Andy Levin, D-MI, noting that he was glad to see the Haiti legislation pass as part of the omnibus package, particularly because it sets a baseline that U.S. policy promote “broad, inclusive and sustained political dialogue among the different actors in Haiti to restore democratic legitimacy and institutions in Haiti.”

A vocal supporter of the Montana Accord, Levin said that “to fulfill this new mandate for U.S. policy, Biden administration officials should withdraw their support from Henry and start supporting a truly inclusive, Haiti-led path to democracy.”