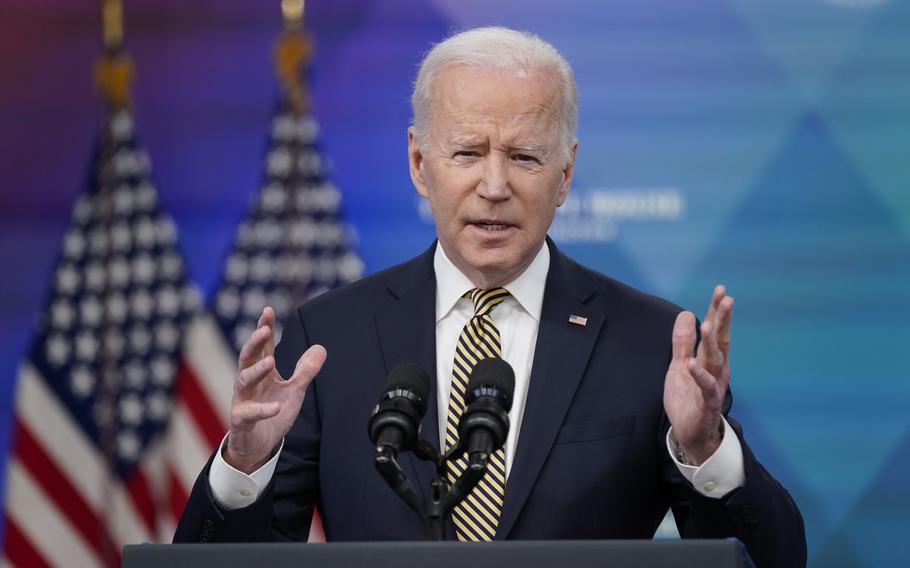 President Joe Biden speaks about additional security assistance that his administration will provide to Ukraine in the South Court Auditorium on the White House campus in Washington, Wednesday, March 16, 2022. (Patrick Semansky/AP)

The Department of Homeland Security said Wednesday that it will grant temporary protected status, or TPS, to Afghan nationals living in the United States without permanent legal status, adding them to a long list of immigrants waiting for the same protection under the law.

Approximately 74,500 Afghans are eligible to apply for the status, which grants them protection from deportation for 18 months and eligibility for a work permit. Afghans residing in the United States as of March 15 are eligible to apply, and they must pay a fee and pass a background check.

For most Afghans, the protection is redundant: The vast majority were paroled into the United States under Operation Allies Welcome and allowed to apply for work permits free of charge. DHS said in a statement that this additional protection will mainly affect approximately 2,000 foreign nationals who were not evacuated - such as international students - and whose visas could expire and leave them in legal limbo.

“This TPS designation will help to protect Afghan nationals who have already been living in the United States from returning to unsafe conditions,” DHS Secretary Alejandro Mayorkas said in a statement. “Under this designation, TPS will also provide additional protections and assurances to trusted partners and vulnerable Afghans who supported the U.S. military, diplomatic, and humanitarian missions in Afghanistan over the last 20 years.”

The designation comes months after the emergency evacuation of tens of thousands of Afghans who aided the United States in Afghanistan before President Joe Biden withdrew U.S. troops and the country fell to the Taliban last year.

To justify the TPS designation, Mayorkas cited the “ongoing armed conflict” and “extraordinary and temporary conditions” that prevent their safe return to Afghanistan, including repression by the Taliban, a “collapsing public sector” and an economic crisis exacerbated by drought and food and water insecurity.

The designation takes effect after it is published in the Federal Register.

The new designees join hundreds of thousands of immigrants from Haiti, Venezuela and other nations already waiting in a massive backlog for TPS processing. Advocates for immigrants say the backlogs are so severe that many immigrants are unlikely to receive the protection before it officially expires, although DHS can renew the protection.

Approximately 100,000 applications from Haitian nationals were pending in the first quarter of this fiscal year, which ran from Oct. 1 to Dec. 31, and little more than 1,000 were approved in the same time period, federal records show. Applications from more than 200,000 Venezuelans were pending in the first quarter, and approximately 13,400 were approved.

The Biden administration has also added Myanmar and Ukraine to the list of countries whose nationals are eligible for temporary protected status, while renewing protections for people from El Salvador, Honduras, Nepal, Nicaragua, Somalia, Sudan, South Sudan, Syria and Yemen.

Biden’s critics say his administration has used its authority too liberally and that the program’s “temporary” intent has been rendered meaningless.

“Mayorkas is clearly committed to using every world conflict or weather event to grant de facto amnesty through the deeply flawed TPS program,” said RJ Hauman, a spokesman for the Federation for American Immigration Reform, which seeks to reduce immigration levels. “Does Congress even care about this unprecedented abuse of authority?”

Democratic Sen. Alex Padilla of California, which has the largest population of Afghan immigrants in the United States, said he was “grateful” to the administration for shielding them from the risk of deportation back to their Taliban-controlled homeland.

Padilla urged the administration to facilitate the arrival of more Afghans who have fled and are now waiting in third countries for a U.S. visa or travel authorization. “We must also not forget about Afghan refugees who are still outside the United States,” Padilla said in a statement.

“I encourage the Department to waive fees and expedite processing for the Afghans applying for humanitarian parole and to take immediate steps to expedite the [special immigrant visa] and refugee program processing,” he said.