About 2,000 migrants from Haiti and Cuba have made the risky trip to Florida since October 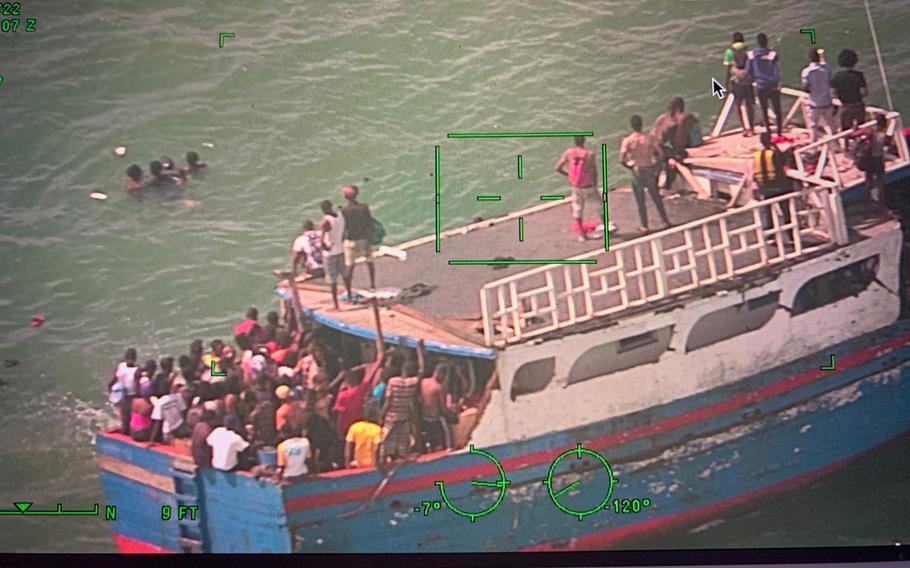 A wooden boat packed with migrants from Haiti arrived in the shallow waters off Ocean Reef Club in Key Largo on March 6, 2022. (U.S. Coast Guard)

MIAMI — About 2,000 migrants from Haiti and Cuba have risked their lives sailing to Florida to flee from political and economic turmoil in their home countries since Oct. 1, according to federal authorities.

On Sunday afternoon, over 350 migrants from Haiti arrived in an overloaded wooden boat that grounded offshore from an exclusive gated community in northern Key Largo, the U.S. Coast Guard said in a statement the next day. In videos posted on social media, many were seen trying to swim to shore.

In about five months, from Oct. 1 of last year to the first week of March, the Coast Guard has stopped 1,152 Haitians at sea, the military branch said.

The federal government tracks migration by the fiscal year, which begins and ends Oct. 1 of every calendar year. Maritime migration from both Haiti and Cuba saw a significant bump last fiscal year compared to the year before. And, if migration between both nations and South Florida continues on its current trajectory, look for fiscal year 2022 to end with numbers not seen in years.

In response to the spike, the Coast Guard and U.S. Customs and Border Protection have been urging would-be migrants not to take to the sea because of the potential perils. Several recent migrations have turned tragic, including when a boat capsized between the Bahamas and Fort Pierce Inlet in late January, resulting in the deaths of 39 people from various countries seeking a new home in the U.S.

The following are the latest figures from the Coast Guard of Haitian migrants stopped at sea:

Since Oct. 1 of last year, the Coast Guard has intercepted more than 850 Cuban migrants, the military branch said this week. Halfway through the fiscal year, these numbers already topped fiscal year 2021.

The following are the latest figures from the Coast Guard of Cuban migrants stopped at sea:

Migrant interceptions off Florida’s coast in 2022

Here are the most recent migrant interceptions off the Florida coast this year as reported by federal authorities:

March 4: For the second time in a week, the Coast Guard stopped an overloaded sailboat — this time packed with 123 people migrating from Haiti — about 10 miles off Anguilla Cay, a Bahamian island just north of Cuba.

March 1: Twelve Cuban migrants arrived in the Florida Keys, the second group in the same week.

Feb. 25-28: In a matter of four days, five suspected migrant vessels were stopped in the waters off Key West, according to the Coast Guard. In total, 36 people from those five stops were repatriated to Cuba last Thursday.

Feb. 27: A group of 13 migrants from Cuba — including two children — arrived in Key West on a wooden fishing vessel.

Feb. 8: Ten Cuban migrants — all men — landed in a canal-front neighborhood in the Florida Keys, according to the U.S. Border Patrol. The group arrived in a makeshift pontoon boat that resembled a floating bed.

Jan. 30: A man borrowed his friend’s boat and used it to pick up 27 migrants from Cuba to bring them to the United States. But the Coast Guard stopped him two days later about 11 nautical miles southeast of Marathon in the Middle Florida Keys, federal authorities said.

Jan. 22: A boat with 40 migrants on board overturned off Fort Pierce Inlet in St. Lucie County. Authorities found one survivor and five bodies before suspending the search.

Jan. 7-10: A Coast Guard airplane crew spotted a boat carrying migrants about 60 miles off Marquesas Key on Jan. 7, the agency said. On Jan. 10, Miami-Dade Fire Rescue personnel tended to a migrant boat off Key Largo carrying up to 100 people from Haiti. Another vessel was also intercepted during that time. In all, more than 30 migrants got sent back to Cuba on Jan. 13.

Jan. 7: A group of 18 migrants from Cuba — including three women — landed in Big Pine Key in the Lower Key, according to the Border Patrol.

Jan. 4: A group of 15 people from Cuba came ashore in the Middle Keys city of Marathon in a rustic wooden boat with the words “S.O.S. Cuba” written on the hull, according to the Border Patrol.