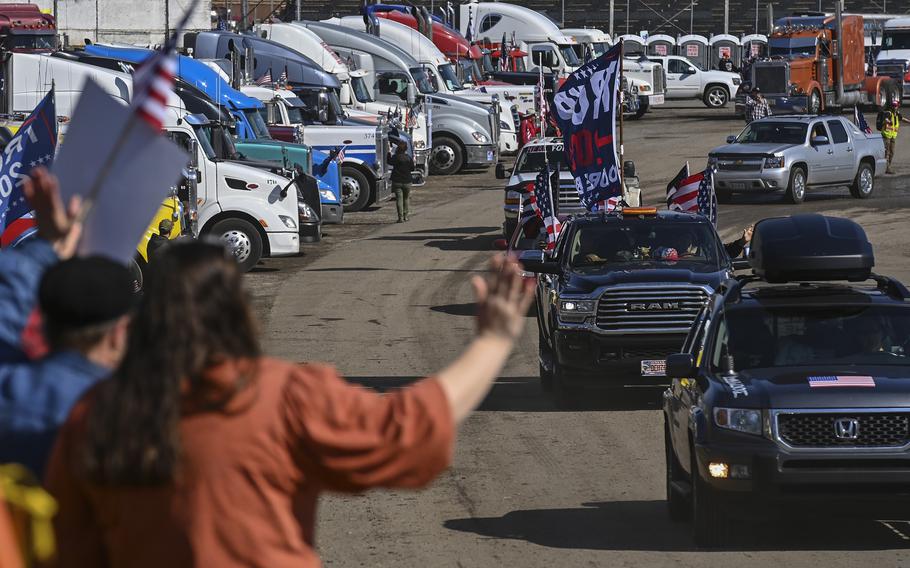 WASHINGTON — Police blocked interstate exits in Washington into downtown as hundreds of trucks, cars and SUVs protesting the government's response to the pandemic rode into the nation's capital to start a second week of demonstrations.

Members of the "People's Convoy" and thousands of other motorists encountered severe backups Monday afternoon, when highway traffic that already was heavy only worsened with the convoy's arrival. The convoy entered the city via the 14th Street Bridge on Interstate 395 amid a near-standstill, then continued to Interstate 695 before crossing the Anacostia River and returning to the Beltway.

Eastbound traffic crawled along a four-mile stretch from the Potomac River to Anacostia in the middle of the day. The D.C. detour represented an escalation in the group's tactics after an application by convoy leaders for a nearly two-week permitted protest on the National Mall was partially denied.

"I believe we're making a good statement today," said one truck driver whose journey was live-streamed under the account ZOT on YouTube. "We're right in the swamp now and creating a horrible mess down here."

Police asked for patience amid the road closures along interstate exits, saying authorities were trying to prevent the convoy from leaving the highway.

"These rolling road closures are occurring in real-time as they are needed, and will be lifted as soon as they are no longer necessary," said an alert from D.C. Homeland Security and Emergency Management. D.C. police began to reopen exits about 3:30 p.m. as the convoy departed the city.

On livestreams, truckers said they never planned to leave the highway and blamed police for causing traffic disruptions. Alaina Gertz, a D.C. police spokeswoman, declined to comment on the decision to block exits, saying the department doesn't comment on "operational tactics."

The convoy, a group of truckers and other drivers protesting pandemic-related health measures, spent parts of most days last week looping the Capital Beltway as a form of protest, but leaders had avoided bringing the group into the city despite a desire from some supporters.

After taking the weekend off because of a snowstorm in the region, convoy organizers announced Monday the group would resume their Beltway loop. They left the Hagerstown Speedway about 10 a.m., but this time with added plans for a detour into Washington.

"Today we're getting right next to their walls," said Mike Landis, a People's Convoy co-organizer. "We're not going to go in and throat-punch them just yet, even though I know we would all love to do that."

Organizers decided to go through the city to display "a bigger presence," convoy leader Brian Brase said in an interview.

"We are still here, and we're not going anywhere yet," Brase said. "It won't be stopping, it won't be blocking anything, they'll just be driving through."

Monday's convoy journey drew comparisons by some drivers to the Battle of Jericho — the biblical conflict in which the city's walls fell to the sound of trumpets after being circled by an Israelite army for seven days.

"Seventh day and we're blowing our horns," one driver said over a CB radio heard during a live stream. "What do you think is going to happen?"

The detour brought the full convoy into the District for the first time since it began Feb. 23 in Adelanto, California, en route to Hagerstown, where its members have been since March 4.

Convoy leaders say they want to hold lawmakers accountable for the government's pandemic responses, saying they are frustrated with vaccination requirements for health workers, federal employees and military personnel intended to limit the spread of the coronavirus. Though many pandemic-related restrictions at state and local levels have been blocked or rescinded, convoy organizers have rallied supporters by calling mandates an infringement on their freedoms.

A broader range of grievances has also brought people to the cause, evident in signs, flags and chants from drivers and supporters in Hagerstown. Some have expressed far-right beliefs and misinformation that equate mandates to slavery, falsely claim "Trump won," referring to the 2020 presidential election, and repeat QAnon conspiracies.

The People's Convoy had also hoped to hold a nearly two-week permitted trucker protest on the Mall starting Monday, but the application was partially denied because of other events already booked during that time frame, according to National Park Service records.

The Park Service was working with the group on another date, location and the conditions for the protest when the People's Convoy withdrew the application Sunday night, according to Park Service spokesman Mike Litterst. The NPS accepts permit applications on a rolling, first-come first-serve basis.

"As far as we are concerned, the books are closed on that proposal," Litterst said.

The convoy originally aimed to bring 500 trucks, 1,000 cars and campers, and up to 100,000 people to the Mall between 3rd and 12th streets on Jefferson and Madison drives from March 14 at 12:01 a.m. until noon March 26, according to the application submitted by Brase.

In conversations with NPS leadership, Brase said he was considering reducing the number of tractors without trailers to no more than 50, down from about 50 to 75, according to a letter from Robbin Owen, chief of the Park Service's permits management division. Brase also was considering reducing the number of participants from a range of 10,000 to 100,000 to no more than 200.

Brase said the permit application was a "contingent plan in order to bring trucks down in a symbolic display where we were going to park on the National Mall."

On the application, Brase said he estimated "a bunch of numbers because I had no idea who was going to show up and I wanted to make sure it was protected." But after speaking with authorities about logistics, he said he did not feel comfortable with the "strain" it would put on city and federal agencies. To address it, Brase said, he came up with a smaller number of participants, but decided against it.

"Ultimately, it just didn't sit well with me not being able to bring everybody down in. I didn't like the idea of having to select who gets to go down there," Brase said. "They never told me I had to cut it down at all. They were totally willing to facilitate that. It's a First Amendment right protest. But I was trying to, I guess, make it easier on them."

The application submitted by Brase also did not include enough information for the National Park Service to evaluate it, according to a letter that requested plans for security, medical aid, transportation, a final list of equipment and information for points of contact.

The group was not planning acts of civil disobedience, according to the application.

When asked on the Park Service form whether the group thought an individual or group would seek to disrupt their event, Brase wrote "antifa," referring to anti-fascist activists.

The application also references "TenFourDC plans," referring to the annual demonstration Brase has helped to coordinate on the Mall. The most recent event was this past fall to protest "the ongoing over regulation of the trucking Industry," according to a permit issued by the Park Service.

It's unclear whether the People's Convoy will again bring its protest into Washington D.C. or hold a permitted demonstration in the future.

"That's a day-by-day case at this time, and we're kind of weighing those options day-by-day," Brase said. "And if I feel that it is something that we need to do, then I will definitely go back down to the permits office and file for a new permit."