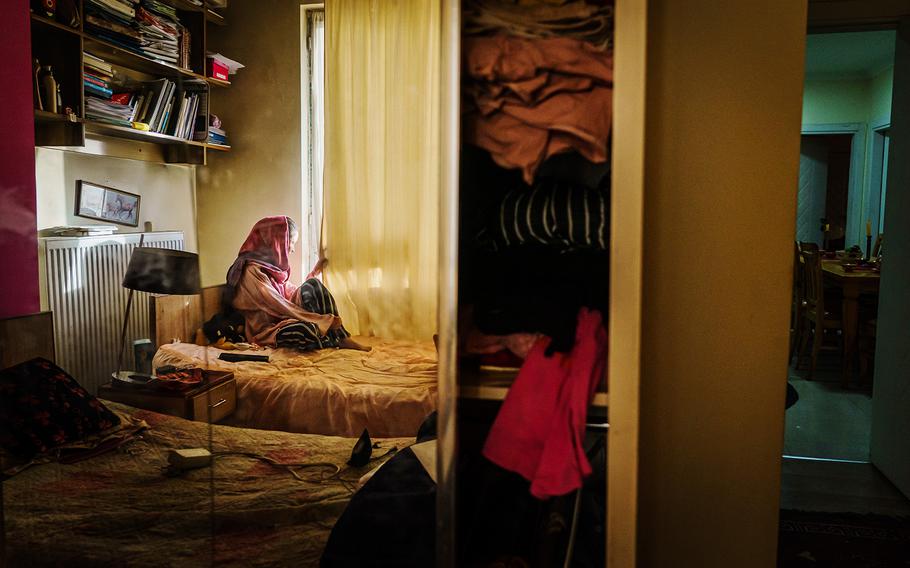 Lamar, 18, who goes by her first name, aspires to work in politics like her father, who used to work for the previous government. She is in her home in Kabul, Afghanistan, on Sept. 16, 2021. Lamar is waiting for her family to evacuate the country. (Marcus Yam, Los Angeles Times/TNS)

WASHINGTON (Tribune News Service) — The Biden administration has issued dozens of denials to Afghans seeking safety in the United States through a fast-track for legal entry called humanitarian parole.

The numbers are still relatively small, but advocates fear they represent a larger trend.

Under humanitarian parole, which is not a pathway to citizenship, the federal government can cut through the red tape of the typical visa process to temporarily allow people to enter the U.S. for emergency or public interest reasons. Advocates say the government belatedly set unnecessarily steep barriers that many Afghans can’t surmount.

Parole is issued on a case-by-case basis and typically reserved for dire circumstances, such as giving someone a few days to visit a dying loved one, but it has also been used to quickly bring in thousands of people in the aftermath of wars or environmental disasters.

U.S. Citizenship and Immigration Services, which typically processes 2,000 parole applications annually, has been flooded with more than 20,000 from Afghans alone since August. With a filing fee of $575 per person, that translates to an infusion of more than $11 million for the agency.

So far, Citizenship and Immigration Services has approved 135 cases.

Spokeswoman Victoria Palmer said the agency has increased the number of staffers working on parole cases fivefold to 44 officers. She added that parole is not intended to replace established processing channels under the U.S. Refugee Admissions Program for people who have fled their country of origin and are seeking protection.

In some limited circumstances, protection needs are so urgent that obtaining protection via that process is not realistic, she wrote in a statement, adding: “This, along with other, multiple factors are taken into consideration when USCIS assesses whether urgent humanitarian or significant public benefit parole warrants a favorable exercise of discretion.”

With no way to quickly leave Afghanistan, even those with family ties to the U.S. could wait more than a decade because of massive visa backlogs.

In denial letters, the agency has requested third-party evidence of “risk of severe targeted or individualized harm.” A 2017 Citizenship and Immigration Services training manual says officers can grant humanitarian parole to people facing “generalized violence.” But the website states that parole is generally not intended to protect people “at generalized risk of harm.”

Applicants must also complete in-person vetting and biometrics screenings before they can be approved for parole. Because the embassy in Kabul is closed, applicants must travel to a third country to do so, Palmer said.

That’s assuming they can sneak past the Taliban to leave.

Massachusetts Democratic Sen. Edward Markey and Rep. Seth Moulton, along with 53 other lawmakers, sent a letter to the federal agency on Monday expressing alarm about the “restrictive and inconsistent” humanitarian parole processing. They asked agency officials to justify what they consider changes to the requirements for Afghans to prove they need parole despite the agency’s discretional authority.

The lawmakers also urged the agency to create a special parole program for Afghans that would go beyond the program established for those evacuated by U.S. forces.

“Tragically, tens of thousands of Afghans and their families now face persecution and death threats from the Taliban, as well as threatened deportation back to Afghanistan for those who made it to third countries,” the lawmakers wrote. “We urge you to ensure that all vulnerable Afghans, including those in third countries and those still stranded in Afghanistan, are paroled into the United States and not left to languish in legal limbo.”

Some 75,000 Afghans evacuated during the chaotic U.S. withdrawal and were brought in under humanitarian parole, which lasts two years and qualifies beneficiaries for work permits and temporary refugee assistance. More than half are ineligible for the special immigrant visas given to those who worked directly with the federal government and will have to seek asylum or other protections before their parole expires or possibly face eventual deportation.

That means many Afghans currently in the U.S. fall under the same category as the journalists, human rights activists, women and others now facing danger and denials of their parole requests from outside the country.

Kyra Lilien, a lawyer at Jewish Family & Community Services East Bay, has received 13 denials for members of two Afghan families. She filed the applications in late August when advocates thought they could get families on evacuation flights if they had a notice that U.S. Citizenship and Immigration Services had received their parole request and it was pending.

Jewish Family & Community Services is also a refugee resettlement agency and has helped arriving Afghans move to the Bay Area for years. The resettlement staff is largely Afghan, Lilien said, and has been submitting humanitarian parole applications for their own families.

Among the denials are an elderly mother, disabled daughter and another daughter who serves as their caretaker. They are relatives of of two special immigrant visa holders who live in the U.S. The women can’t physically sneak over the border to escape. Once people with special immigrant visas receive their green cards, they can petition for immediate relatives to immigrate.

Another client whose case remains pending is a prominent journalist for an international media outlet, whose brother is a U.S. citizen. The same day the Taliban took over his city, they asked the journalist to come to their office for an interview, Lilien said. The man, who had been kidnapped and tortured by the Taliban before the arrival of U.S. forces, was bedridden from a recent back surgery and asked for a week to finish recovering.

As soon as he was able to move, he went into hiding. A neighbor had recently been invited by the Taliban for a meeting and was found dead hours later, according to Lilien.

When the Taliban found out the journalist had fled, they took a third brother, a shopkeeper. The family paid $25,000 to release him from jail days later.

Lilien worries the family will be denied parole and is trying to supplement the applications with testimony from people who witnessed the kidnapping of the shopkeeper. But she’s not sure it’ll be enough.

“The people who are getting denied now are the same people who were being scooped into the bellies of airplanes in August,” she said. “It’s just that the door is closed.”