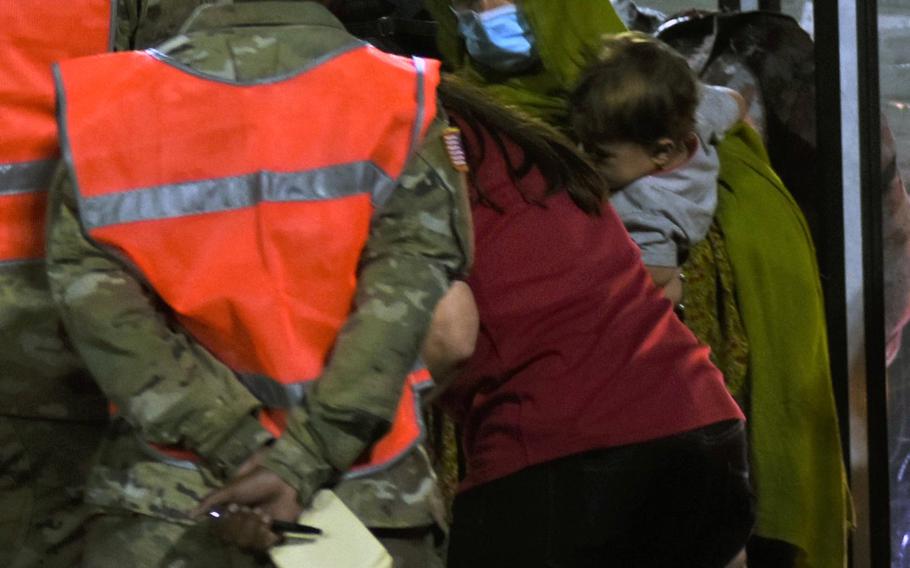 Buy Photo
A woman holding a small child steps off the bus at Ramstein Air Base, Germany, on Friday, Aug. 20, 2021, after arriving on a U.S. military flight from Al Udeid Air Base, Qatar. (Jennifer H. Svan/Stars and Stripes)

(Tribune News Service) — The wrenching scenes of Afghans fleeing a chaotic Kabul disappeared from television screens weeks ago, but thousands are still in danger and desperate to get out of the country.

Now a large, national coalition of legal and community groups is working to enable many of those people to enter the United States — but says the Biden administration isn't helping.

The administration, says Project ANAR, the Afghan Network for Advocacy and Resources, has stopped approving a specific type of immigration permission, called humanitarian parole, for Afghans trapped inside the country.

No one there has been granted parole since Aug. 31, they say, when the United States completed its official evacuation. Parole would allow endangered Afghans to enter the United States, although they would need to get here on their own.

A spokesperson for United States Citizenship and Immigration Services, the agency that handles parole requests, on Thursday referred questions on the matter to the Department of Homeland Security. That agency did not immediately respond when asked for comment.

"We have filed thousands of applications for Afghans left vulnerable by the U.S. government," said Saamia Haqiq, a coordinator with Project ANAR. "We are extremely concerned that these applications are now at a standstill."

The United States evacuated about 120,000 people as Afghanistan fell to the Taliban. Today an estimated 53,000 are living on eight U.S. military bases, including Joint Base McGuire-Dix-Lakehurst in South Jersey, as they await resettlement to communities across the country.

Though commonly described as "refugees," most were in fact admitted under humanitarian parole, a different category of immigration.

This week about 120 Afghan, legal, advocacy and community organizations sent a letter to the White House and members of Congress, demanding information and clarity on thousands of pending petitions. The groups asked the White House and elected and appointed officials to:

— Issue conditional approvals to Afghans who have completed their parole applications, and ensure safe passage for those in Afghanistan and other countries as they seek to travel to the United States.

— Require officials from the Department of Homeland Security and the State Department to publicly brief Congress on the matter within 30 days.

— Publish how many applications USCIS has received for humanitarian parole, along with how many of those have been granted, and show how long the process is taking.

Project ANAR estimates that 9,000 applications have been filed but not adjudicated by USCIS, and said it expects to file a total of 30,000 on behalf of vulnerable Afghans.

Some of those people worked closely with American forces. Others fear harm from the Taliban because they worked as journalists or in government, or because they're targeted ethnic minorities, like the Hazara people.

What all have in common, says Hamid Yazdan Panah, an immigration attorney and the advocacy director for Immigrant Defense Advocates in California, is "they're folks who are terrified at the prospect of living under the Taliban."

Project ANAR says it has raised more than $350,000 to help pay the $575 filing fee required with every application. And that it could raise more money to help pay for flights and transportation out of Afghanistan.

Humanitarian parole is merely a permission to enter, not an immigration status. And unlike the designation of "refugee," it carries few benefits and privileges.

Those entering under parole get no automatic right to work, nor a guaranteed path to permanently stay in the United States.

Even with parole approvals in hand, Afghans would still have to find their way to a U.S. embassy or consulate in a neighboring country, since American diplomats have left Afghanistan. They also would have to pay for their own flights and transportation.

Against those barriers weighs the fact that parole can save lives.

Though usually granted on a limited, case-by-case basis to people in urgent need — say an adult child needs to enter the country to care for a dying parent — parole also has been employed to evacuate large groups of people, particularly wartime allies.

"The United States owes a unique duty to the people of Afghanistan given not only the events of the last year, but the last few decades in the region," said Wogai Mohmand, an attorney and coordinator for Project ANAR. "The least our government can do is act in good faith in responding to this community-led effort to provide critical support to Afghans.