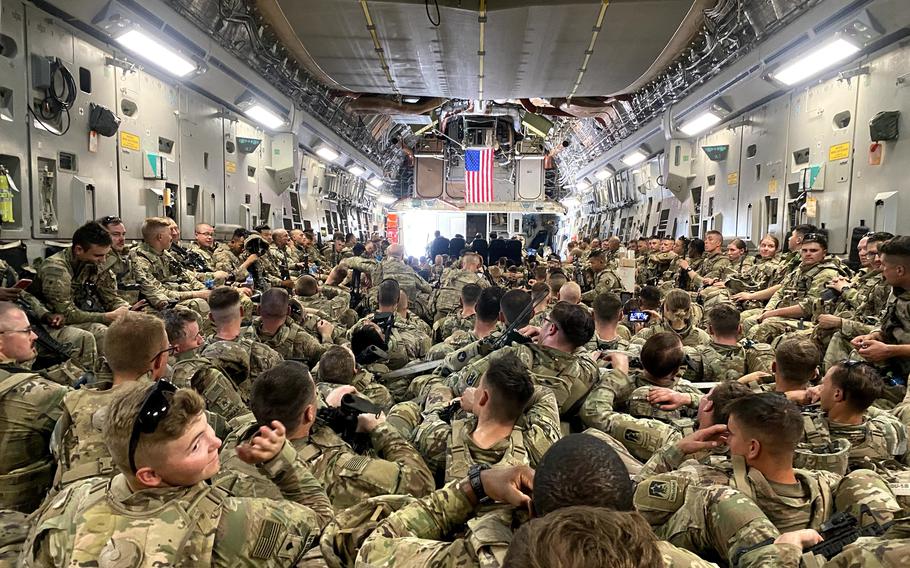 National Guard Soldiers from the Minnesota-based 34th Infantry Division pack a U.S. Air Force-operated C-17 in August following the completion of their mission in Kabul, Afghanistan. Deployed in support of Operation Spartan Shield, about 400 Soldiers from 34th ID were temporarily relocated to Kabul, Afghanistan, and have since arrived safely in Kuwait, where they are assigned. (Bridget Haugh/U.S. Army)

(Tribune News Service) — Lt. Col. Jake Helgestad bolted awake from a dead sleep. It was 11:17 p.m. on Aug. 12, and someone was knocking at his trailer door in Camp Buehring, Kuwait.

"Sir, we have to be in Afghanistan in 24 hours," a soldier told the commander of the Minnesota National Guard's 1st Combined Arms Battalion, 194th Armor Regiment, based in Brainerd.

Helgestad rubbed sleep from his eyes: "What?"

For weeks, his soldiers had been monitoring the deteriorating situation in Afghanistan as Taliban fighters closed in on Kabul with the pending American evacuation. He didn't expect his unit would head to that tense place — theirs is a unit with tanks and hulking Bradley Fighting Vehicles, and Afghanistan is a mountainous country.

But their mission was to be ready. For anything.

"Then it was zero to 1,000: 'Hey, you gotta go, and you gotta go now,'" Helgestad said from Kuwait last week in his first media interview since the Afghanistan evacuation. "What I always say to my staff is that no one will ever have to wait on us. They tell us they need us to be there, we'll be there."

The military machine cranked into motion. The 425 Minnesota soldiers leaving Kuwait for Afghanistan were to provide security to ensure the safe evacuation of tens of thousands. They packed — gear, ammunition, food — then went to the nearby U.S. air base and waited for planes to ferry them into the chaos. They slept on a gravel parking lot. Helgestad stood on a chair and addressed his troops: "We have spent the last two years training for this very event. You have to trust yourself."

Early on the morning of Aug. 18 — less than 48 hours after the terrifying scene of fleeing Afghans clinging to an American military plane had captured the world's attention — a C-17 filled with Minnesota National Guard soldiers dove into the darkness of Kabul on a steep combat landing.

The next 12 days at the Kabul airport were, for Helgestad and his soldiers, a sleepless time of never knowing if, or when, their security mission could turn deadly.

The area the Minnesotans were in charge of was a section of the airport, perhaps four city blocks wide, just north of the tarmac. Along with the Army's 82nd Airborne Division, they provided security at the airport so a successful evacuation could take place. Minnesota National Guard snipers manned five security towers alongside Afghan soldiers. They guarded two entry-control points and made sure people did not hop over the two walls, including a 15-foot concrete wall, that kept the airport separate from public streets. Their biggest fear was an ISIS-K rocket-propelled grenade attack of a security tower. Or a suicide bomber sneaking through alongside fleeing refugees.

During those two weeks, Helgestad estimates some 40,000 Afghans flowed through their part of the airport. Most of the Afghans he saw were "the lucky ones" who had been allowed inside airport walls and were leaving the country. He could see tense families heave a breath of relief once it seemed they had secured spots on flights. He cautioned his soldiers to stay emotionally unattached; they had a mission to do, and they could not help everybody.

Still, it was impossible not to be touched by the humanity and by the despair. Helgestad will always remember Afghan refugee children inside airport walls, about to begin a new life, turning office chairs into the most fun toy in the world. The 48-year-old father of two couldn't help but think of his own children, now in high school in the Twin Cities' southern suburbs, in the midst of college visits and high school football season.

His wife and children have been through plenty of long deployments.

Helgestad had joined the Guard in 1991 to help pay for college. He was selling insurance in Rochester, fresh off a Saudi Arabia deployment and graduation from officer candidate school, when 9/11 happened. He went all in on the military life. He deployed to Kosovo on a peacekeeping mission, then to Iraq for a nearly two-year tour during the surge. He's worked full time for the National Guard ever since.

He landed in Kuwait in June with 10 companies and 1,100 soldiers under his command, the vast majority of whom had never deployed.

After the 425 soldiers landed in Kabul, they improvised. Soldiers were transported around the airport on baggage carriers, feet dangling over the side. Service members who knew how to weld helped seal holes in the perimeter. One of Helgestad's administrative soldiers could hot-wire vehicles, so the soldier commandeered a giant street sweeper and cleaned the tarmac so C-17s could take off without debris being sucked into engines. Cooks had evacuated the cafeteria, so soldiers cooked up thousands of chicken fingers. Helgestad procured an armored Mercedes-Benz to ferry him around the airport grounds; the car had Pink Floyd's "The Wall" on the stereo.

"It was surreal," Helgestad said.

On Aug. 26, a week after the Minnesotans landed, a suicide-bomb attack at the airport's Abbey Gate was followed by an assault by gunmen, killing 13 U.S. service members and scores of Afghans.

Abbey Gate was on the other side of the airport from where the Minnesota National Guard soldiers were. They didn't even hear the blast, but a surgeon and physician assistant from the Guard assisted in the chaotic triage afterward.

During those two weeks, one Minnesota soldier was hit in the head by a stray bullet; he had his helmet on, though, and the bullet only shattered the mount for his night-vision goggles. Another bullet pierced a soldier's pantleg.

Miraculously, by the time all the Minnesota National Guard soldiers had left Kabul by the end of August and returned to the Kuwaiti desert, they had zero casualties.

How does a soldier process those two weeks spent perpetually on edge?

Do you place it in the sweep of history? Do you emphasize how you helped evacuate tens of thousands of Afghans in one of the largest airlifts in history? Or do you focus on those left behind?

Helgestad did none of the above. As his 425 soldiers in Kabul were approaching the withdrawal deadline, his soldiers who'd stayed behind in Kuwait were processing and doing medical checks of the 5,000 Afghan refugees temporarily housed at Camp Buehring. Nearly 200 of his soldiers were about to head to Egypt for a weekslong multinational training exercise. Iraqi elections were coming up, and his unit had to keep tabs. Their deployment won't end until January or February, and there was no guessing what might come next.

"We participated in a generational event," he said.

History, he knows, will judge its meaning. They did their job. Emotions can be dealt with later; this is a memory he knows will never fade. Helgestad is still a soldier, still with a battalion under his command, still on deployment in a region of explosive uncertainty.

Their last night in Kabul, the soldiers did not sleep. Desperate Afghans, who knew Americans would soon be gone and their fate would fall to the Taliban, scampered over airport walls in a rush to escape their country. But American soldiers had to keep an orderly operation, not just allow anyone to evacuate. So that last night, they detained several dozen of these Afghans and escorted them back to the other side of the walls.

Early on the morning of Aug. 30, the last plane of Minnesotans was leaving. Helgestad stood on the runway, next to the C-17's ramp. Eight of his snipers sprinted across the tarmac and into the plane. Helgestad followed, and the ramp closed.

Only three units from the 82nd Airborne remained, and all three would leave Kabul before midnight.

As the plane lifted off over the mountains near Kabul, Helgestad knelt by the sealed ramp, pulled out his poncho liner, curled up on the metal floor and fell fast asleep.