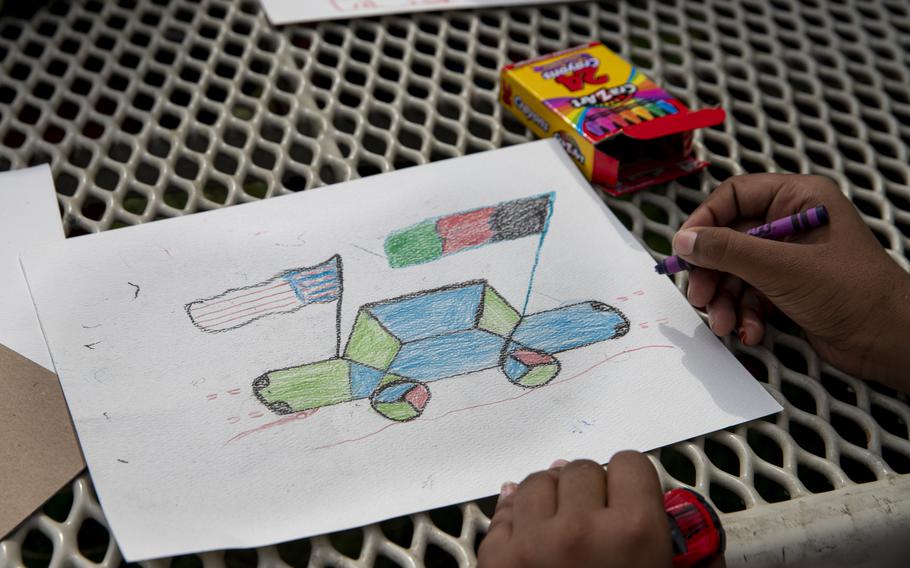 An Afghan child draws a car with the American and Afghanistan flag at a children’s activity event held by non-governmental charities on Ft. McCoy, Wisconsin, Aug. 31, 2021. (Rhianna Ballenger/U.S. Army)

But as the area gets ready to welcome hundreds of Afghan families, agencies such as the Della Lamb Community Center are preparing for a more hectic schedule in the coming days.

“We anticipate that we’ll be receiving multiple families a week for the foreseeable future,” executive director Ryan Hudnall said.

Della Lamb is scheduled to welcome the agency’s first five Afghan families by the end of this week or early next week, Hudnall said.

“It’s providing a leading indicator of the volume that we expect to receive,” Hudnall said.

Della Lamb expects to receive a total of 250 Afghan evacuees.

More than 20 evacuees have arrived at Catholic Charities of Northeast Kansas since last month. More are expected to arrive through the weekend, according to Kasey Featherston, director of refugee and immigration services.

Afghan translators, interpreters and other workers who have aided the U.S. military are eligible to resettle in the U.S. under the Special Immigrant Visa program. But the majority of Afghan evacuees are arriving on “humanitarian parole,” meaning they are not legally considered refugees and are typically ineligible for the same benefits.

But Congress passed a continuing resolution on Sept. 30 granting Afghan evacuees without a Special Immigrant Visa access to refugee resettlement benefits, including food assistance and Medicaid.

The resolution has relieved some pressure from local resettlement agencies.

“This will give us the capacity to really support people,” Singer said. “It will also give us the ability to provide additional direct financial assistance to cover basic needs for people as they transition into work.”

The three agencies said they have had to work fast under short notice to make the necessary arrangements to welcome families, including identifying and furnishing affordable housing.

Agencies typically receive two to four weeks’ notice to get a family set up. But given the urgency of the situation, that period has shrunk to allow for just a couple of days’ notice.

“Our preference is to have a permanent home, fully furnished and waiting for them, to bring them home to after we pick them up at the airport,” Singer said.

Though Singer is hopeful to make this happen for many families, she anticipates it will be a challenge given the lack of available affordable housing in Kansas City. She’s looking at temporary housing for people to stay in until they can find permanent housing solutions.

Catholic Charities has limited free temporary housing, but some evacuees have had to resort to staying in hotels, paying out of pocket from their one-time, $1,225-per-person stipend from the government, Featherston said in an email. Catholic Charities is seeking additional financial support to help offset the expense for families.

While many Kansas Citians have volunteered their homes, placing evacuees in a house with people they don’t know or share a common language with is not preferred, Singer said, adding that it’s a last resort.

She recommends getting involved by volunteering with any of the three Kansas City area agencies, donating items, especially furniture, or sending financial support.