Vaccine resistance in the military remains strong, a dilemma for Pentagon as mandate looms 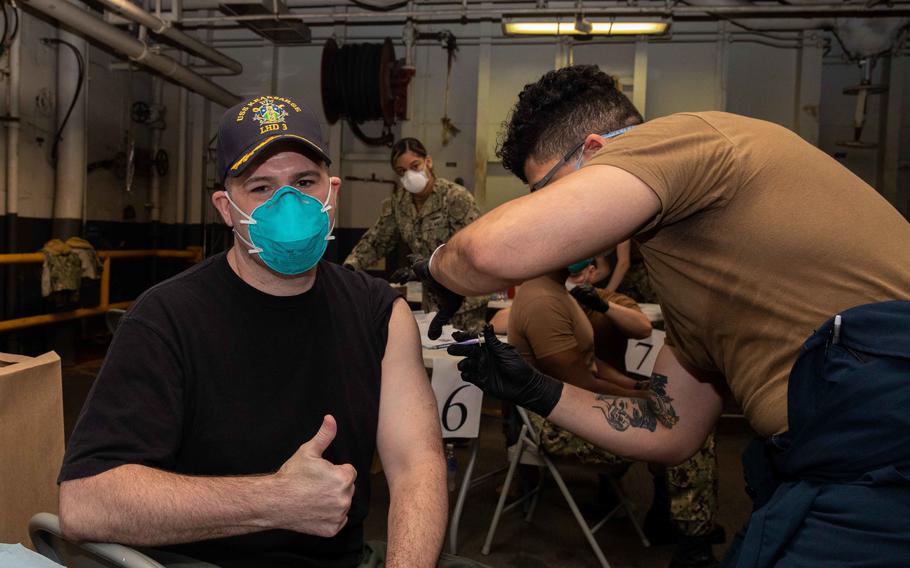 WASHINGTON — The Pentagon’s effort to mandate coronavirus vaccination for all 1.3 million active-duty service members will continue to face resistance from a segment of the force, troops and observers say, until military leaders devise an effective strategy for countering pervasive doubt about the pandemic’s seriousness and widespread misinformation about the shots designed to bring it under control.

When Defense Secretary Lloyd Austin announced earlier this month that he would seek to require inoculation no later than mid-September, Pentagon data showed that thousands of personnel — about one-third of the force — remained unvaccinated. President Joe Biden quickly endorsed the move.

The looming mandate comes as the virus’s highly transmissible delta variant fuels a new wave of infections globally, and after Biden, in what was widely seen as a signal to state and local governments and the private sector that they should follow suit, directed agencies throughout the federal government to implement proof-of-vaccination requirements or impose restrictions on employees who refuse. For military personnel, administration officials have said, the need is particularly urgent.

“Right now it’s being framed as a readiness issue,” said Katherine Kuzminski, a senior fellow at the Center for a New American Security, pointing to the current security crisis that has unfolded in Afghanistan’s capital, where thousands of U.S. troops were sent with little notice to help evacuate American citizens and U.S. allies following the Taliban’s takeover of the country. “As we see in Afghanistan, there is certainly a need to rapidly deploy people, and they may or may not be going to places that have relatively high rates of vaccinations.”

But, Kuzminski added, “I don’t think we’ve seen a vaccine that was [so] politicized.”

The Defense Department did not respond to a request for comment about its efforts to address vaccine hesitancy within the ranks.

Vaccine rates have varied widely between the individual service branches. In July, before Austin’s announcement, the Navy led the way with more 70% of its personnel fully vaccinated. At the low end, fewer than 60% of Marines met that criteria.

Though Pentagon officials have made clear a mandate is imminent, and that those who refuse risk losing their jobs, inoculation has been voluntary since the vaccines were introduced over the winter — a rare optional task in an organization where orders are the norm. Anecdotally, it appears at least some have viewed the lack of a requirement as grounds to infer the shots might not be safe despite a wealth of evidence to the contrary — or even that they’re unnecessary if their health and physical fitness is otherwise good.

“Just from talking to soldiers, picking their brains, some of the things I’ve heard have been ‘I don’t know the long term effects’ or ‘I just don’t know enough and it worries me,’” said Capt. Javon Starnes, a soldier at Fort Bragg in North Carolina. Starnes detailed his own bout with the virus in an episode of “The 18th Airborne Corps Podcast,” which also featured interviews with other soldiers from the base who espoused a variety of views on vaccinations, ranging from an early desire receive a vaccine to an ongoing reluctance.

“Me being a 24-year-old guy, I work out regularly, I think I’m pretty in shape,” said Sgt. Colton Joiner said on the podcast. “I think if I were to weight the risk, I think at this time it’s not as much of a risk, it’s not that significant to me.”

Kuzminski, the military analyst, noted that age — and the relative youth of the armed forces compared to other government institutions — is likely a factor in voluntary vaccination rates.

“The reality is that there is some impermeability with young service members. They have a tough job, they put their lives on the line,” she said. “There is a certain sense of fearlessness.”

But as the Pentagon’s data bear out, that mindset is not pervasive across all of the services.

One potential factor driving the Navy’s comparatively high vaccination rate, observers say, can be traced to last year’s high-profile coronavirus outbreak on the USS Theodore Roosevelt, which left the ship and its crew crippled after hundreds of sailors became sick. It was one of the first major incidents within the military to illustrate how swiftly the virus can spread, particularly among those living in tight quarters, and for many leaders it was a frightening wake-up call.

“There’s also a culture in the Navy that is much more top-down,” Kuzminksi said. “The commander has a lot more cultural authority because being shipboard is such a contained community.”

Others pointed to past instances of forced exposure to vaccines or chemical agents, dating to radiation tests and Agent Orange in Vietnam, as a potential explanation for the vaccine hesitancy that remains so pervasive. In 2004, a federal judge barred the Department of Defense from mandating an experimental anthrax vaccine after some service members who were inoculated years prior questioned whether there was a corollary to various ailments they had developed. More recently, questions have been raised among military veterans and medical professionals about health issues stemming from exposure to toxic substances at open-air burn pits in Iraq and Afghanistan.

“What I’ve found from speaking to soldiers is that there are some who are, in a broad sense, skeptical of the government,” said Col. Joe Buccino, a military spokesperson for the XVIII Airborne Corps at Fort Bragg who, as host of the unit’s podcast, has explored the question of vaccine hesitancy among Army personnel. “And that is probably drawn from a broader skepticism within the American population, probably going back to the early 1970s.”

There is also the inescapable reality that, for many Americans, the coronavirus vaccines are seen more as a partisan political issue rather than a matter of public health and shared responsibility. Further sewing doubt for some are the rampant disinformation and conspiracy theories spreading on social media, not just related to the virus or the efficacy of the vaccines but to potential exemptions for service members.

When the coronavirus vaccine is made mandatory for military personnel, the only exemptions would be for religious or medical concerns, which the Pentagon has pledged to uphold. Yet last month on Gab, a social networking site popular among the far-right, documents circulated claiming they would garner an “air tight religious exemption” request from the “potentially deadly” vaccine.

“You’ve got a social media site that already traffics in white nationalism that is specifically targeting the military to inject these ideas into the conversation,” said Kris Goldsmith, an Army veteran and CEO of Sparverius, a company that tracks online extremism. “ . . . There is also a lot less distance between your family and friends. Today you bring your TikTok and Twitter with you, so even if the military is a diverse place, you can constantly be exposed to misinformation.”

With the likelihood of the vaccines becoming mandatory, military leaders now face the possibility social media disinformation campaigns will actively work to undermine them. Goldsmith notes that, already, there is considerable messaging online “encouraging active-duty troops to disobey lawful orders,” and users who identify as service members questioning whether they will be forced to resign or retire from the military should they continue to refuse the vaccines.

It remains to be seen precisely how the military will address any continued resistance once the vaccine mandate takes effort. In announcing his intent Aug. 9, Austin stopped short of establishing a deadline by which all personnel must be vaccinated and said that the leaders of each branch of service would be responsible for establishing their own plans.

“One of the narratives that has been getting picked up over the past couple of weeks is this idea that there will be all these people court-martialed,” Goldsmith said, referring to a sort-of doomsday scenario that’s been discussed online in the military is faced with the decision of separating tens of thousands of troops or conceding to those who wish to remain unvaccinated. “And while that is theoretically possible, that would be a huge drain on resources. So what I would expect is [that commanders turn to] nonjudicial punishments, duty restrictions, measures that make life inconvenient until someone relents.”

For now, it appears the Defense Department’s senior leadership anticipates such instances will be rare, and that those told to get vaccinated will fall in line. Asked earlier this month if he thought service members would refuse such an order, the Pentagon’s chief spokesman, John Kirby, demurred. “Members of the military, he said, “understand when you sign up for the military that there are requirements laid upon you.”