Biden orders Pentagon to plan for mandatory coronavirus vaccines for troops, but the shots remain voluntary for now 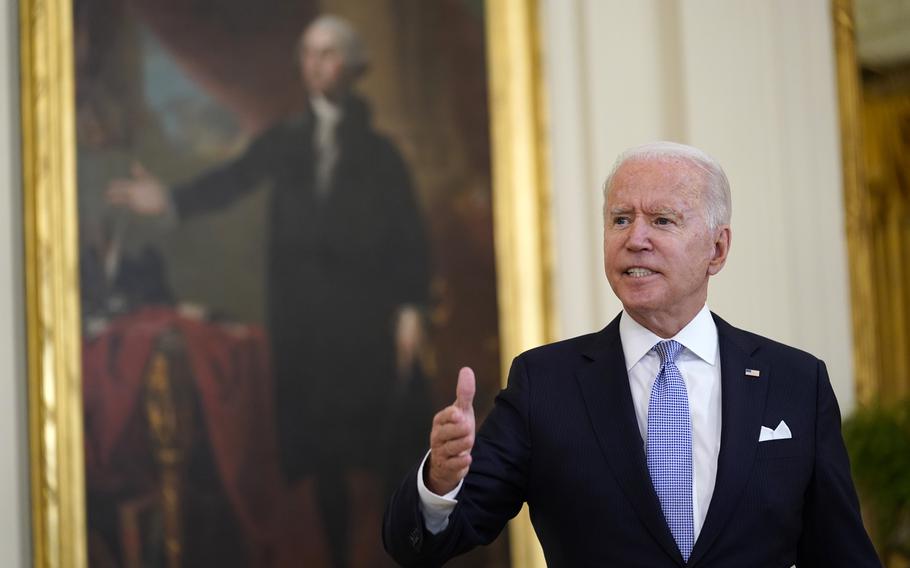 President Joe Biden answers a question from a reporter after he spoke about coronavirus vaccine requirements for federal workers in the East Room of the White House in Washington on Thursday, July 29, 2021. (Susan Walsh/AP)

WASHINGTON — President Joe Biden on Thursday directed the Pentagon to consider how and when they will require troops to receive the coronavirus vaccine but stopped short of mandating the shots as the vaccines remain under emergency-use authorization by the Federal Drug Administration.

Though the military requires troops to receive many vaccinations, federal law prohibits the Pentagon from mandating those without full FDA approval. The president has the authority to bypass the restriction and require troops to get the shot, but Biden has not done so.

Yet Biden said Thursday during a public address from the White House that service members have an especially critical need to get vaccinated.

“I think this is particularly important because our troops serve in places throughout the world — many where vaccination rates are low and disease is prevalent,” he said.

Defense Secretary Lloyd Austin is “open” to requiring the vaccine before its full authorization, Biden said, but “the question is when is the right time to get the most bang for the buck?”

“A lot of this is timing, and so I think it's going to happen,” the president said. “It's still a temporary approval, so when does the final approval come? It usually takes a lot of work to get there.”

Biden said he expected full FDA approval should come “in the early fall.”

About 77% of active-duty sailors, 70% of soldiers, 61% of airmen and 58% of Marines had received at least one dose of the vaccine as of June 30, according to the most recent data from the Defense Health Agency.

But with the vaccine now readily available and no mandate yet, military leaders face the challenge of how to convince the remaining vaccine holdouts to volunteer for the shot, Vice Adm. John Nowell, the chief of naval personnel, said Thursday.

“Hey, 77% [vaccinated] is pretty good, but we look at that and say, ‘That means we’ve got 23% and their families that we want to get vaccinated because we don’t want them to die,” Nowell said. “It’s about that simple.”

In the past week, two unvaccinated sailors died from the coronavirus. The U.S. Naval Institute News reported Wednesday, citing an unnamed Navy official, that both sailors, one of whom was a doctor, were unvaccinated.

“Before we had the vaccine available, it was tragic,” Nowell said. “But it makes me want to cry when I see a sailor who passes away now and they had a chance to be immunized and they didn’t take it.”

Without a mandate, Nowell said he hopes sailors will independently “understand the imperative” of getting vaccinated “as they look at the news and they see what's happening with those rates of infection for the unvaccinated.”